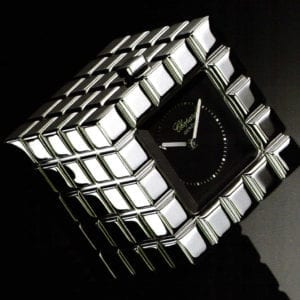 The Track Record of the Modern Watch

The track record of the modern watch was when the art of watch making mutated from a more or less expensive pocket watch to a practical wristwatch. And social and economic factors such as burgeoning industrialization gave society a technical spin at the onset of the 20th century, changing the way we think of time and writing the success story of the wristwatch. 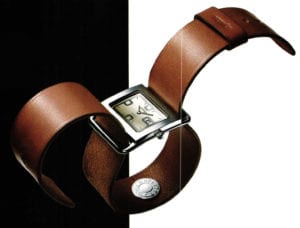 The designer Fréderick Vidal designed “Barénia” for Hermès whose watchstrap consists of one single leather strap. By Hermès 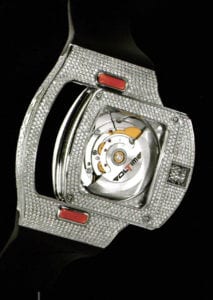 “Diamond Modules” is a luxurious timepiece equipped with something like a mobile watch housing. By Voltime Time Item

At first, wristwatches were just pocket watches redesigned for function including shapes adapted to the new function. In 1920, only one watch in four coming out of the factory was a wristwatch, but regular developments in the casing and technical innovations in the clockwork made pocket watch miniatures an individual design accessory in their own right. There were a whole series of form models, or non-circular watch casings. Rectangular, square, oval and asymmetrical shapes were in competition with the strictly circular watch. And the flatter the shape of the casing, the more important the design of the faces became. The face and hands metamorphosed into the watch’s countenance and the way it was designed could make or break a timepiece. In other words, not just technical innovations, design became an important measure of success. 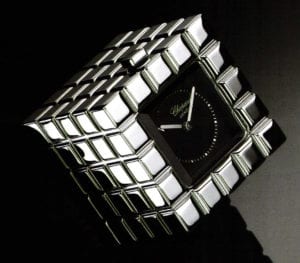 A refreshing contrast to the conventional vernacular of shapes: this ice cube design table clock. By Chopard

There is a tremendous range of different wristwatch types on the watch market today. From traditional to classical, from state-of-the-art to stylish, the watch has become an expensive luxury item or a personal accessory without one trend leading the way for the entire market. A major segment is caught up in the stylish trends that increasingly contribute colors and shapes. Designers bring their expertise from other areas to watchmaking to demonstrate that watch development and design is not always dependant upon the inner life and the intricacy of clockworks. More and more reputable designers are being given the opportunity to immortalize themselves with their own model design by watch producers. A major point on the agenda of the Biel-based watch company of Pierre Junod in Switzerland is collaborating with established and internationally known architects and designers. As Pierre Junod puts it, “we’re looking for young enthusiastic architects and designers who would be willing to design a new watch for our collection of sophisticated timepieces”. The idea is coming up with a watch based upon the designer’s idea while being as faithful to the original as possible and incorporating the precise design, shape, colors and size to produce each and every watch in Pierre Junod’s production plant in Switzerland. Reputable designers such as Arne Jacobsen, Michael Graves and Mario Botta have added major pieces to Pierre Junod’s collection of watches. The architect Mario Botta even says it’s a major challenge to design a watch. Botta is glad to follow the call because to him the watch is an object that innumerable designers have tried their hand at, without that being the last say. 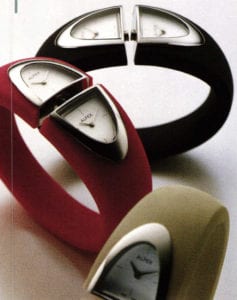 Any real cosmopolitan always has the time zones at a glance. The “Two-Time Bango” watch is set in precious caoutchouc Elasten 3000. By Alfex Switzerland 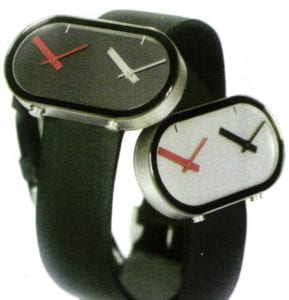 The “Dual Time” with an oval appearance and two time displays, each of which can be set individually. By Lella Vignelli and Massimo Vignelli for Pierre Junod

It’s not the first time this year that Fossil has showcased watches from Philippe Starck. There are only a few designers who are as successful at crossing over the limits of design as Phillippe Starck. That’s why it’s not surprising that the successful designer also creates watches and his collection for Fossil even bears Starck’s personal signature. Developed by Fossil, this series of watches is the result of regular collaboration between the two. Starck has not only designed his first avant-garde watch shapes with a digital display for the new collection, but also a round shape of the casing. His minimalist watch shows seconds on the edge of the lunette as numbers. 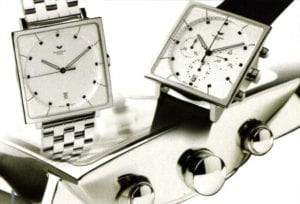 Characteristically, Ventura has a forward-looking corporate philosophy. Since it was only set up fourteen years ago, these Swiss watch designers don’t have a great deal of company tradition to talk about, although they’re that much more optimistic when looking into the future. Ventura wants to set themselves off from short-lived fashions with their motto of contemporary but timeless. They have put extensive research into functionality and ergonomics to pave the way for a Ventura watch. Hannes Wettstein, a Swiss architect and designer, has had a major impact on this company’s range of models. The hallmark of Ventura’s futuristic watches is a basic conic shape for the casing combined with a generous digital display. The casing and bands are made of pure scratch-resistance hardened titanium or stainless steel, making Ventura into long-life products. However; the Ego-Square collection of watches is closer to the classics. The Belgian jewelry designer Hubert Verstraten designed the shape of it consciously taking its cues from the Ego lines of Hannes Wettstein. Verstraten has the square shape of the lunette flow into a round base with an idea originating in Verstraten’s collection of rings that he calls “Squaring the Circle”. This is how he came up with his characteristically iconoclastic shape for Ventura’s collection. 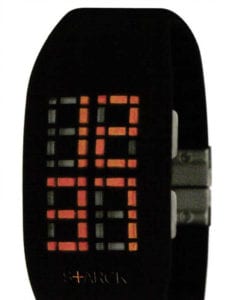 You can only see the digital display of the PH1055 watch when you press the button. By Philippe Starck with Fossil

Jeweled watches were milestones in the history of the wristwatch and you can still find them on the watch market today. They can’t conceal their origins. It’s obvious that they go to market with what the reduced designer watch or the expensive chronograph convey in understatements: pure luxury. Jeweled watch evidences fine workmanship and precious materials in the design shape, selection of materials or just in the line of jewelry chosen. Some examples are the Ice Cube collection from Chopard or the Barenia model from Hermés. They define luxury in terms of a simple, but high-quality strap.