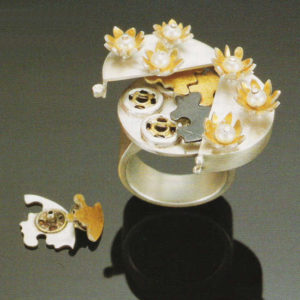 The Work of Jay Song

Jay Song affirms, “My experiences are memories, but they accumulate in my body.” Living in the United States, far from her native Korea, Song externalizes her memories in personally symbolic rings. Yet, with their interactive elements, these ornaments also draw in the wearer and viewer by generating tensions between visible surfaces and concealed interiors. Song’s rings use hands as expressive sites where ‘the memories that no one can see become visible-they are alive.”

This enlivening function is particularly poignant in the case of Funeral, a ring that memorializes the rape and murder of a friend’s mother. Song attended the funeral, breaking with Korean tradition, which dictates that women participate only at the end of the service. Deeply affected by the tragedy and the funerary rites, Song created a ring whose shimmering silver recalls the pan-Asian mourning color, white. Its hexagonal form replicates the ritual vessel that contains a body’s ashes after cremation. Song cut one character into each side, representing love, joy, hate, greed, anger, and happiness-the six basic emotions in Korean thought.

These elements “humanize the form”, while the cover invites the wearer to activate the ring’s symbolism. The cover is incised with the character for sin. Carefully removing this reference to the rape/murder is a purifying act. the container’s sides unfold and one is left contemplating a chrysanthemum, the Asian funeral flower, delicately rendered and evocative of how life and death affect one another Song fabricated the ring’s band with a design of a bridge because “the ring is a bridge between life and death.”

Much more playful is Puzzle, a ring to toy with during what Song calls the “heart-beating time” she herself experienced while waiting for an admired man to call: as the minutes tick by, the wearer can move the flowers about, then open the ring and distract herself with the five puzzle pieces. Ms. Hyde is a humorous homage to Song’s best friend in Korea. The young woman was very Westernized, fashionable, and pretty, yet when she got drunk she went out of control, picking fights, collapsing on the street; atypical of Korean women, to say the least, as was her habit of opening beer bottles with her teeth. Ms. Hyde honors a dual identity: its curving feminine filigree contains a working steel bottle opener. It is Song’s memoir of a beautiful friend whose hidden characteristics-however odd-deserve practical recognition.

With Myself, Song says she discovered the importance of self-portrait, here she confronts Western influence on her own character. Myself at first appears simple and uncomplicated, ornamented only with an Asian design motif commonly found on doorways. This surface is indeed a portal: the ring spreads open to reveal three inner layers symbolic of a faceted personality. The first juxtaposes bamboo and the rose, deftly interwoven symbols of Asian and Western cultural influences. On the back of the bamboo is another rose figure, just as on the reverse of the rose is bamboo. “You can’t tell which side is the stronger, they blend,” Song says. She also uses this strategy of double juxtaposition with the pink tourmaline and blue aquamarine, contrasting traditional Korean femininity with masculinizing Western influences. At the core, black and white cubic zirconiums signify the ambivalence of moral decisionmaking. For Song, all of these currents “exist in a harmony that makes my life richer.”

“I’m not a secretive person,” Song observes, “but my work tells me I have many layers. I have a secret room in my heart telling me to do this kind of work.” Each ring has a outwardly expressive force, yet Song expands the commemorative function of rings to honor the inner complexity we all carry. She engages our hands with rings that open up, draw us in, and let us explore-in physical and psychic terms-the hidden spaces of memory and identity.