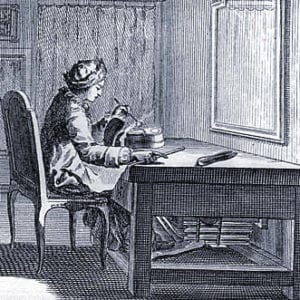 A cache of treasures that had lain hidden for some 300 years was unearthed in 1912, during excavation work in the Cheapside area of London. This was therefore known as the Cheapside Hoard and it is a collection of considerable historical importance.

The pieces that comprise the Cheapside Hoard are chiefly in the Museum of London, and the most important items of jewellery are on permanent display. The collection, since its discovery has been an unparalleled marker for secular objects made prior to the second half of the 17th century. Indeed, so little comparative jewellery has survived that the discovery of the Hoard has been described as the finding of a ‘time capsule’.

The pieces in this collection that have enamels include groups of neck chains, pendants, hat ornaments, tapering shanks for fans, buttons and rings. In addition, there are a few singular items. One of these is a verge watch, with the movement dated to about 1600 and attributed to a Genevan maker. This watch is set into a hinged case made from a hexagonal polished Colombian emerald, 42 cm in length. The dial plate is of translucent green enamel, in a style of guilloche. Another luxury piece, a miniature gold scent bottle with fitted chain, 56 cm high, is enameled with white and inset with five panels of engraved and polished chalcedony and with gemstones.

In addition to all these pieces, the items found in this Hoard included unfinished ornaments, unmounted gemstones, detached pieces of glaze, and conglomerations of mineral fragments. The jewellery and enameling techniques show diversity of treatment, and the gemstones included many that were imported. This suggests that all this was probably part of the reserve stock of a goldsmith’s shop, where jewellery was made and repaired, and where imported pieces were handled.

White enamel is applied as a coating over some of the gold forms. This treatment, characteristically used by Renaissance goldsmiths, was an effective means ofaccentuating the contours of small gold objects. White, used for settings, increases visual contrast of the gems and coloured inlays.

For the neck-chains, some of the small sections are formed with round gold wire outlines, to hold the enamels. This is, therefore, similar to some aspects of filigree work. Filigree jewellery, characteristically with thin round or twisted wire outlines, was typically made in Portuguese and east European workshops of the period. For the use of cloisonné, seen on the backs of some of the hat ornaments and inner surfaces of the rings, there are tantalizing links with other centers.

Cloisonné enamels were traditionally produced in East European workshops. The use of enamel to coat the Metal on the inner surfaces of rings and bangles became a style for Indian jewellery. However, the pieces in this collection have their own attributes. It is possible therefore that artisans trained abroad, following various traditions, were employed at this period in English ateliers. Alternatively, just as the gemstones found in the Cheapside Hoard had originated in other countries, some of the groups of jewellery could have been imported wholly or partly finished.

For the neck-chain sections with cells made up of tiny circlets or petal forms, soldered in groups to make quatrefoils, enamels are inlaid with the glaze fused with raised contours or half-bead effects. To produce the half-beads during firing of the paste, small cells are filled high with paste. As the enamel is brought to flowing point during firing, such outlines constrict the glaze, and this arches upwards, to form a pronounced meniscus. The alternative method could be to use white enamel already pre-formed as beads. The miniature enamel beads or half-beads would then be positioned within the gold outlines, and fired into place, thus bonding lightly within these settings and the glaze maintained at the correct contour. Interestingly, in this use of white enamels for beaded or droplet effects, the gold is formed with an openwork construction so that the enamel inlay spans across, without a backing for the cells. In principle, therefore, this technique foreshadowed the making of filigree plique-à-jour work with clear enamels A few loose fragments of enamel, which had become detached from neck-chain sections, were examined under the microscope. The arched and beaded fragments have the high contour on the top and the glaze is glossy. In contrast, the undersides of the fragments are flat, and chiefly with open air holes and a matt appearance.

For small pieces with white enamel, in this genre of work, a single firing would have been desirable. That avoided problems that could arise from multiple firings. It was also economical in the use of fuel when using a goldsmith’s furnace. The alternative was to fire this scale of enamelwork with the lamp, which could bring small objects to the necessary temperature. Firing at the lamp was a method of producing beadwork, glass threads, miniature forms, and small enameled gold objects. The use of the lamp had the advantage that each piece was watched throughout the fusing process, to bring the molten enamel to the correct point and avoiding over-firing.

Some fragments from the Cheapside Hoard could be scientifically analyzed with non-destructive processes. The scientists involved were Heike Bronk and Stefan Rohrs, of the Technical University of Berlin. Their report of 2002 gave the following conclusion:

“Results of a quantitative analysis of samples of the Cheapside Hoard: The summary of the results: All white/turquoise enamels are opacified with tin oxide in a lead-rich glass matrix. A remarkable high tin oxide content was found. For the turquoise colour, copper and a little cobalt were added and the finding was of a low potassium value. This low potassium value could be an indication for the use of soda ash as fluxing agent, and would thus compare with opaque coloured glass of the 16th century as used in the Venice area. One fragment of black glass/enamel [that was analyzed from the Cheapside Hoard] was found to have an unusually high content of coloring oxides, and had a low potassium content. Interestingly, a comparison with French enamels used by the Limoges painters, which are far more abundant from the 16th century, showed differences from those of the Cheapside Hoard. The source of the Cheapside Hoard enamels therefore would probably have been Venice, which was the traditional source of the clear [flux] enamel for most European goldsmith-enamellers from the 16th century up to the 19th.”

Antonio Neri, the Florentine priest who recorded the recipes for glass making in his renowned L’Arte Verraria [1612] gave instructions for the making of the basic enamel [the flux] in his Chap. XCIII [93. P. 146]. In the translated version this reads:

“The Material wherewith all Enamels are made. Take of fine Lead 30pound, fine Tin 33 pound, calcine them together in a Kil [kiln or furnace] and serce [powder and sieve] them. Boil this Calx with a little clean water in clean earthen vessels, take it from the fire and decant off the water by inclination, which will carry with it the finer part of the Calx, put fresh water on the remainder, then boil and decant as before, repeat this as long as the water carries off any Calx. Recalcine the gross remaining calx and then draw off again the more subtile parts, as before. Then evaporate the waters which carried off the finer Calx, at a gentle fire, specially at the last that the Calx may not be wasted. It [the Calx] will remain at the bottom much finer than the Ordinary. Take then of this fine Calx, of Crystal Fritte made with Tarso ground and serced fine, of each 50 pound, of white salt of Tartar 8 ounces, powder, serce and mix them well. Then put this mixture into anew earthen pot baked, giving it a fire for 10 hours, then powder it and keep it in a dry covered place. Of this stuff are made all the Enamels of whatsoever colour. This shall be called the stuff for Enamels.”

Neri gave recipes or part-recipes for White and Milk-white enamel, for Azure, for three varieties of Green, for Red [with manganese, to give a purplish hue], Purple, Yellow that fired well on gold, Sky-coloured Blue and Violet. This range is represented in the various pieces of jewellery in the Cheapside Hoard.

The esteem in which enamels were held in the 15th, 16th and 17th centuries, thus the period to which the pieces of the Cheapside Hoard can be dated, was stressed by Neri. He wrote. “Enamelling on Gold and other metalls is a fair and pleasing thing, and in its self not only laborious, but necessary, since we see metalls adorned with Enamels of many colours make a fair and noble shew, enticing beyond measure the eyes of the beholders”.

The Cheapside Hoard by Hazel Forsyth

This recently published 64-page small format book gives an overview of the jewellery and luxury objects that comprise the collection known as the Cheapside Hoard.

The numerous and diverse objects of the Hoard had lain undisturbed in their deeply interred hiding place for some 300 years until they were dug up during excavation work in Cheapside in London [England] in 1912. Thus all the recovered objects date to before the mid-17th century, which was a time when Cheapside had been ‘the principle market street in London’ and was noted for its goldsmiths’ shops.

With the exception of the long-out-of-print London Museum Catalogue No. 2 The Cheapside Hoard of Elizabethan and

Jacobean Jewellery, of 1928, there has been no comprehensive published source on the background and contents of this unparalleled collection until this new book. The text of Hazel Forsyth’s book centers on the details of how the Hoard was found and the historical context of the pieces. There is `new information on the site, the murky events surrounding its [the Hoard’s] discovery and its subsequent acquisition by the Museum of London’, and this book contains much more besides. There is insight into how such jewellery was worn in the 17th century and information on the goldsmiths’ area in Cheapside, London. The excellent supporting illustrations give a visual source for the most important pieces, of which many are enameled.

The range of precious stones, rock crystal items, groups of different styles of jewellery and related materials, makes it probable that the Hoard was part of the stock of a jeweler’s shop of the early or mid-17th century. The enamelwork is applied to various distinctive groups: neck- chains, pendants, bejeweled holders for fans, hat ornaments, rings and buttons. There are single examples of small luxury pieces, notably a watch cased in a polished emerald with a green enameled dial, and a sumptuous miniature gold perfume holder, with gemstones and enamels.

Apart from heirloom jewellery and devotional arti facts, the custom of past centuries was to send objects of gold and gemstones to be reworked, even when not damaged by wear. As a result, extremely few objects in this genre, and which were probably in frequent use, survived in their original state into the 19th and 20th centuries. The Cheapside Hoard is particularly valuable because all these diverse items survived as a group. The illustrations of the secular jewellery are of especial interest for enamelers and designers as well as for historians.