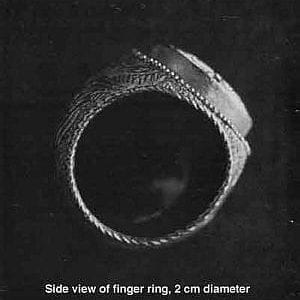 Although the technique of enameling may have been invented independently in widely separated regions the history of the earliest cloisonne enamels started from Cyprus.

An island in the eastern Mediterranean, with a history of more than 8000 years, Cyprus was one of the earliest producers of copper in the world, had a flourishing metal industry and during the ‘Golden Age’ of Cyprus, the island enjoyed a high level of prosperity. This brought a great number of settlers and craftsmen from neighboring countries. In order to escape the troubles on the Greek mainland, Mycenaean refugees arrived in Cyprus establishing important workshops and introducing new ideas and techniques that played an important role in artistic creation. During this period a new decorative technique, that of cloisonne enameling, unknown elsewhere at the time, appeared in Cyprus. 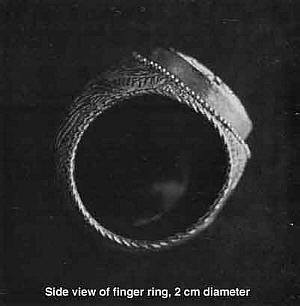 During the 9e Biennale de Limoges, in July 1988, I had the pleasure of meeting Mr. Woodrow Carpenter, President of The Enamelist Society of the United States of America. He suggested that some information pertaining to these early enamelers from Cyprus would be of interest to all enamelers. In an attempt to throw some light on a dark epoch of enamel history, I have collected some material that may help identify Cyprus as a place of origin of cloisonne enameling. 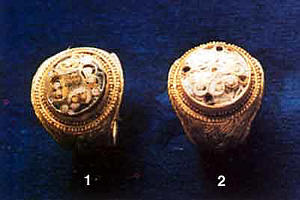 Kouklia is a small village in southwest Cyprus that occupies the site of Palaeopaphos, an ancient city of great wealth and importance during the late Bronze Age and known throughout the ancient world for its sanctuary of Aphrodite.

In 1952 a British archaeological expedition to Cyprus, jointly sponsored by the University of St. Andrews and the Liverpool City Museum, excavated a locality named Evreti on the east side of the village. The archaeologist in charge of the excavation of the tombs was G.R.H. Wright. Recently I had the pleasure and good luck of meeting Dr. Wright at the Nicosia Museum and I am most grateful to him for all information given to me. 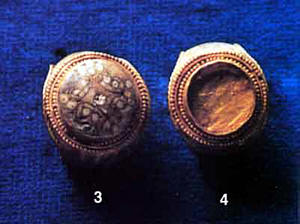 Wright excavated eight productive tombs, T8 being the most important. It was almost square with a narrow cist dug in the center of the floor, extending from the entrance to the back wall. The tomb was constructed no later than the middle of the fourteenth century B.C. and was exceptionally rich in precious metals. The finds consisted of two silver bowls and gold jewels which included two heavy ribbed bracelets, four plain open-ended toe-rings, ten leech-shaped earrings and four earrings with pendants in the form of ox-heads. 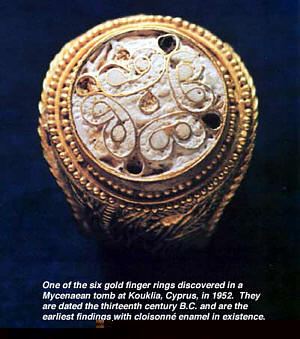 The most remarkable objects discovered were six gold rings with cloisonne enamel dated 1230-1050 B.C. With the kind permission of the Director of Antiquities we have studied the rings closely and have taken photographs. The rings are almost identical. Two were not displayed and one had no contents within its bezel. Three are in good condition. The hoop is wide and broadens near the bezel. It is chased with a flame design and twisted wire square wire is soldered on the edge. The round bezel is made separately from a wide strip of gold soldered to the base and bordered by granulation consisting of two rows of grains. Within the bezel there are cloisons of rectangular gold wire in the shape of scrolls and rings filled with enamel. The material within the bezel is enamel because: 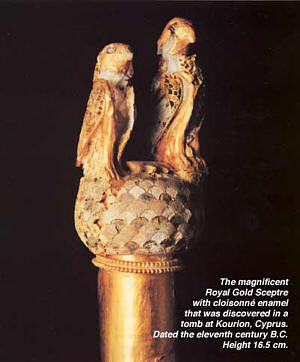 Another early cloisonne enamel from Cyprus, dated the eleventh century B.C., is the famous Royal Gold Sceptre from a tomb at Kourion. It consists of a plain tube with a sphere on top supporting two vultures. The sphere and the birds are decorated with cloisonne enamel in white, blue and mauve. The scale pattern of the sphere is a Mycenaean design which was also common in vase painting and ivory carving. Underneath, the sphere is surrounded by two rows of grains. Height 16.5 cm.

Six gold finger rings from Kouklia and a Royal Gold Sceptre from Kourion are the earliest cloisonne enamels in existence and indicate that the technique of cloisonne enameling was first practiced in Cyprus during the thirteenth century B.C.

I would like to express my gratitude to Mr. V. Karageorghis, Director of Antiquities, Cyprus, and to Mrs. I. Nicolaou and Mr. M. Loulloupis of the Nicosia Museum, for permission to take photographs and the facilities to study the gold objects described.

I am particularly grateful to Dr. G.R.H. Wright, the archaeologist in charge of of the excavation of the tombs at Kouklia, for generously giving me his time and assistance and, above all, most valuable information on his magnificent discovery of the earliest cloisonne enamels.

Dr. Panicos Michaelides was born in Limassol, Cyprus, in 1924. He studied medicine in Glasgow and was elected Fellow of the Royal College of Surgeons of Edinburgh. Until 1984 he was senior specialist and head of the Orthopaedic Department of the Limassol Hospital.

He studied enameling at the Sir John Cass School of Art in London and worked under George Lloyd, Philip Barnes, Jane Short and Georgina Follett, all skilled enamelists in London, as well as Emailleur Buforn in Limoges. He is a member of the Pancyprian Association of Goldsmiths, member of the Enamelist Society of the America and associate member of the British Society of Enamelers. He works mainly in gold, silver and enamel. He has exhibited metalcraft and jewelry in Cyprus, Athens and Washington D.C. Work in silver and gold can be found at Asprey’s London, the ‘Zygos’ Gallery, Washington D.C., the Precious Metal Gallery, Limassol, and in private collections, apart from Cyprus, in many countries abroad. He may be contacted at the address below:

All articles by this author
Previous Understanding the Process of Platinum Casting
Next Cyclosilicate: Aquamarine
Social media