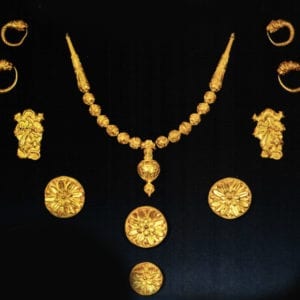 The Art Treasures of the Thracians

To date, Orpheus and Spartacus are probably the best-known representatives of a people whose traces have been lost in history. The mythic singer and inventor of the kithara as well as the celebrated leader of the slave revolt against Rome are iconic for the culture of the Thracians. It is a culture driven by art and war and it has remained shrouded in mystery to this very day. 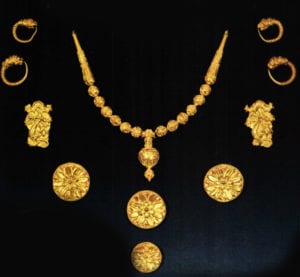 Jewelry from the Maltepe Hill 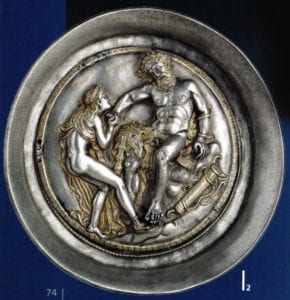 Cover of the treasure found in Valtchitran. Gold, silver inlay. Late Bronze Age, the 14th to the 13th century B.C.

After the Indians, the more than 90 tribes of the Thracians were the largest people of the ancient world for many centuries. They left virtually no written records and only formed a greater association of states for a very brief period. The main country they inhabited was today’s Bulgaria, the path to conquest and link to the major cultures of the ancient world. The meeting of minds with Greeks, Persians, Scythians, Celts, Romans and Egyptians left a lasting impression on their culture.

We primarily have Greek sources to thank for what we know about this mysterious people. Herodotus, for example, is aware of barbarian customs such as polygamy, selling one’s own progeny into foreign countries, killing widows and a reversal of sentiments that may seem strange to us: childbirth was accompanied by loud moaning (because children were now to be confronted with a life full of hazards) while the dead were carried to their graves with laughter and jokes (because all of the joys and pleasures of the hereafter awaited the dead). 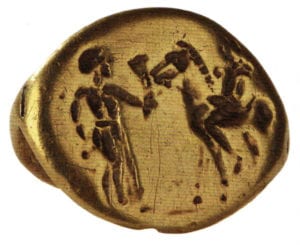 Ring from the mound over the grave of Brezovo. Gold. 4th century B.C. 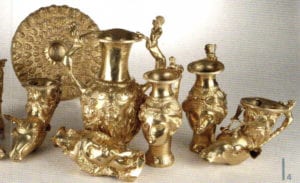 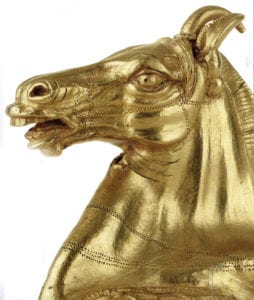 Today, the Thracians are being recollected thanks to an excessive cult of the hereafter with rich gravesites that cause astonishment and admiration as in the ancient world. Archaeologists have an accident to thank for the discovery of the most spectacular findings in recent times. They encountered a farmer’s wife who wore a chain with little golden rings. Her husband found it or his fields and made the jewelry out of it. What scientists near the village of Dabene 100 kilometers east of Sofia recovered from the earth contained 15,000 objects of gold that could easily match the treasure of Troy.

In spite of excessive grave robbing, the archaeologists are hoping to make some similar findings. Dr. Valeria Fol says there are innumerable barrows between Sofia and the Black Sea and there are said to be more than 15,000 all over Bulgaria. No more than 10% of them have been opened. 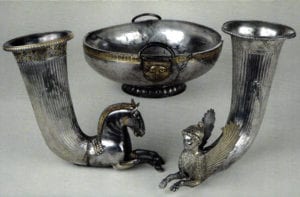 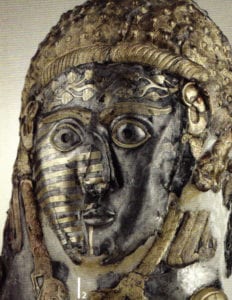 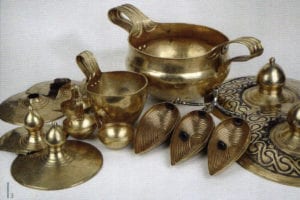 Treasure found in Panagjuriste. Phiale and amphora rhyton, rhyta with the heads of women and animals. Gold. 4th to 3rd century B.C.

Given the cornucopia of findings, it makes sense that there are reports of sensational new discoveries. In August of 2004, the head archaeologist Georgi Kitow found the grave of a king with vessels made of bronze and silver, a golden ring and a golden mask with the features of a human face made of 500 grams of pure gold. This is the first Thracian golden mask found to date.

Daniela Agre discovered another grave of a king 2,400 years old near the village of Zlatilitsa in July of 2005. The archaeologists are of the opinion that a crown in the form of a golden wreath and other valuable burial gifts could indicate that this is the final resting place of the ruler Seutus whose reign of terror the Greek chronicler Xenophon tells us about. However, the discoverer guesses it’s probably the King Kersoblept who was also an honorary citizen of Athens.

The rich findings in the last few years have given this area the name of the Valley of the Thracian Kings alluding to the Egyptian city of Luxor. The Thracians were master metal-workers. A wealth of gold and silver was found in the mountains and rivers of the land, although its gold was imported from Transylvania and its silver was imported from Asia Minor at an early stage. Two pieces of metal alloy of gold and silver in the form of the skin of an ox provide proof. These are the ‘bars’ of the ancient world that were traded and transported in this fashion. 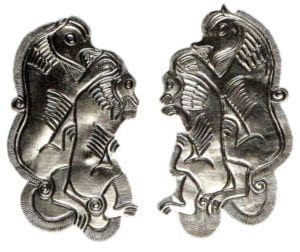 Decorative fittings from a grave at the Mogilanska Hill. Silver. Middle of the 4th century B.C. 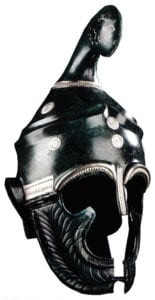 The priest’s and king’s service known as the Treasure of Valtchitran bears witness to an incredible magnificence with its two vessels, four chalices and seven lids. It is crafted of 12.5 kilograms of pure gold and comes from the period 1,500 before Christ. The scientists say there’s no doubt that this service was used for carrying out the rite of the cult of the sun. Its craftsmanship reveals great skills, which allows us to conclude that the Thracians had relations to Asia Minor. There’s no doubt it is the product of local Thracian master craftsmen. And there is something else we know: the gold used comes from mines located in the South Carpathian Mountains, in other words this people’s heartland.

The reports of historians combined with the extraordinary treasures of gold from Panagjuriste, Varna, Russe and Valtchitran picture the people who created these artistic works today. The Thracians loved gold, wine and horses. They took over ideas, gods and innovations from their neighbors and developed them on. Unfortunately, because of their disunity, they ended up as vassals of the Roman and they have retreated entirely in the darkness of history after the Huns attacked them about 7,000 years after they originally emerged.