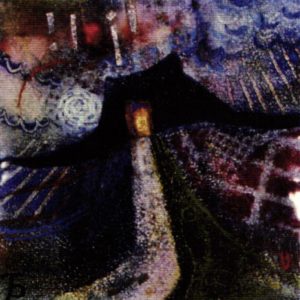 Editor’s Note: Terry’s Retrospective Exhibition had more than 30 enamels. The Retrospective Catalog has 26 pages with 31 illustrations. There are 14 enamels depicted (some of the enamels are as large as 17 x 14 inches). The enamels are on copper and steel. Other media represented in the catalog include watercolors, acrylics, collage, and mixed media. Terry has been enameling for 40 years.

Each year the San Antonio Art League and Museum (SAAL&M) gives this prestigious award to an artist of acclaim and accomplishment. It is an honor to present this award to Terry Gay Puckett for 2009. She works in various media and all are exceptional. 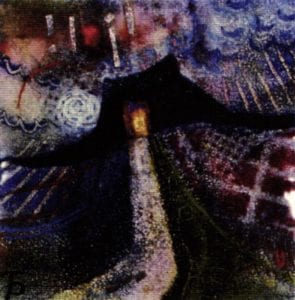 Terry Gay has been a long time member of SAAL&M and has exhibited often in our artist exhibitions. She also served as chairperson on many of SAAI&M’s committees. As a teacher, she has inspired many young artists and still does this today.

I am pleased to write on behalf of Terry’s being accorded by the illustrious San Antonio Art League and Museum the honor of “The 63rd Artist of the Year, 2009.”

Throughout these many years I have followed with delight Terry’s creative depth of mind and heart. I continue to be impressed by the wide range of her artistic spirit, and as in a poem, all blooms brighdy. 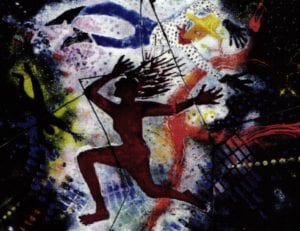 It is written that “In all art, character is the embodiment and the articulation of each and every artist ancient description matches Terry’s aesthetic, expressive character.

There are exciting interludes when Terry guides line and brush in comedic satire, revealing the gl”tirg vicissitudes of life and living, causing her audience to smile assent. Other times, I have been witness to her talents when her brush reveals a depth of observation, compared to clouds sailing in heaven’s glory, and the flowing fountain of inspiration, immortalizing the presence of things not seen, but what she feels, thinks and perceives of life’s secrets.

Many thanks to the San Antonio Art League and Museum for choosing me as Artist of the Year 2009, providing the opportunity to place work from 1962 through 2009 into perspective. It is an honor to be the 63rd person on this list of enormously talented artists.

As a seeker and a dreamer, the art muse has always been a close friend of mine. Art has been my passion since childhood. Following my heart, it became a career.

The process of creating art anchors my life, and provides an incentive to live in the moment. First, an idea takes hold and digs roots into the imagination. Next, I choose the medium that best suits the project. Currently, I am working in vitreous enamel, watercolor, collage and acrylic, often mixing media. Emotions blend with technique to create a finished piece.

My work is fueled by indefatigable curiosity, spirituality, meditation, and travel. It is a pleasure to interact and share these visions with others who are also the willing captives of the art muse.

Volume 28, Number 5, December, 2009
Glass on Metal is the only publication dedicated to enameling and related arts. Technical information, book reviews, how-to articles and insight on contemporary enamelers highlight each issue.
Category:
About the author