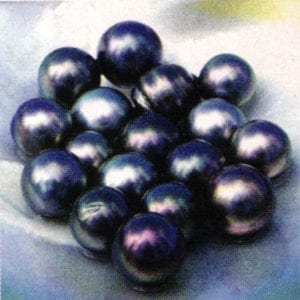 Tahitian Pearl: In The Black

It seems as though the Tahitians were granted their wish: Tahitian pearl supply is down, and prices are up.

Strict government controls implemented to improve the quality of Tahitian black pearls reaching the overseas market have resulted in a steady decline in the volume of Tahitian pearl exports over the past four years. Exports dipped to 8.1 tons in 2005, compared to 8.5 the year prior and as high as 11 tons in 2002, according to Perles de Tahiti, the government’s pearl promotion body.

The quality of Tahitian black pearls has been steadily increasing.

Although export volumes have dropped, the value of the pearls has increased, indicating that the quality of exported Tahitian pearls is up as well. Loose Tahitian pearl exports accounted for US$126.5 million in 2005, 15 percent more than 2004. The average price per gram also increased by 21 percent, rising to $16 per gram. Wholesalers who deal in Tahitian pearls estimate that current prices have increased 3 to 15 percent, depending on the quality.

“We have seen prices go up,” says Jenine Kelly of ProVockative Gems Inc. “Prices are pretty strong, especially for things that are a bit more unusual, like pistachio [color]. Prices are really strong for fancy colors.”

“I would say prices for Tahitian pearls are getting stronger, which is a good sign,” says Avi Raz of A & Z

Pearls Inc. “The Tahitians have better control of the quality and quantity [of pearls coming in]. I’d say, roughly, in the last six months there’s been about a 10 percent increase in price.”

Although the intention of the Tahitian government was to boost prices by controlling the quantity and quality of pearl exports, not all agree that this is the main cause for a recent price hike.

“Well, I’ve seen an increase in price, but I’m not sure that’s the reason,” states Carlos Chanu of PCD Fine Pearls. “There’s just more of a limitation on higher-end [goods]. There’s a high demand for this type of material, especially in sizes larger than 13 mm.”

Kelly agrees that better goods are harder to find. At the recent Robert Wan Tahitian pearl auctions, she notes, “Although prices were high, the quality was nothing spectacular. If it was spectacular, then it was small. The huge – 14 mm and up – gemmy, single-color pearls were not there.”

Workers at a Tahitian pearl farm clean the oysters. Photos by Morgan Beard.

Many dealers report that demand for nicer-quality Tahitian pearls remains high, with unique pearl colors currently in fashion. “The multicolor Tahitian pearls are doing well,” says Kelly. “Pistachio — which is a fancy color — there’s always a demand for that, especially if it’s fine quality. Multicolored is the only thing that anyone asks for in Tahitians right now; that, or the unique colors. Last summer multicolors were dead, and I never thought I’d be seeing them sell so well now.”

“The unique colors in Tahitians are selling well,” adds Chanu. “Coppers are hot.”

Dealers predict that unique pearl colors will continue to be strong but say that the traditional blacks will still hold their ground. “My preference will always be a darker color with a greenish hue,” says Raz. “They look better in jewelry and are easier to sell.”

Awareness of the newer Tahitian colors — and even the traditional black pearls — can be attributed to aggressive worldwide marketing efforts from Perles de Tahiti.

“Perles de Tahiti . . . has been spending time and effort, working hard, and investing resources to promote the product. It reminds me of the Japanese 15 years ago,” says Raz. “Demand [for Tahitian pearls] is increasing, definitely growing. More people are aware — they see them in consumer magazines. Awareness and the beauty of the product together have increased demand. I wish to see the Australians and South Sea people do the same thing — and the Chinese. They need to learn from the Tahitians.”

All articles by this author
Previous Tone Down, Dress Up
Next 2007 Complex Individualism
Social media