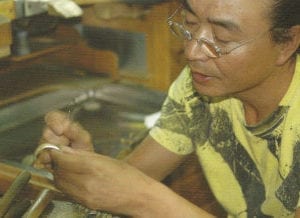 Set in a deeply wooded area of Bethesda, Maryland, Namu Cho’s brick house at first appears to be similar to those of his neighbors. Yet this resemblance stops abruptly at his front door, hand carved with an imposing image of two eagles, the larger one looking outward in a protective pose with a smaller eagle looking inward. This gilded image heralds the powers that await inside.

One senses a strong creative force immediately upon entering. Just beyond the front door, cactus-like metal spikes reach up from a sculpted metal stem, ready to hold guests coats and other belongings. A narrow hallway leads toward an inner gallery of rooms in which remarkable objects made by both Cho and his wife Jean are integral parts of their living space. Cho has incorporated large antique wooden rice hulling boards brought from his native Korea into furniture-sculptures. One functions as a bench on hand-forged legs with an open, hammered back of patinated copper, resembling abstract human and plant forms with pointed “thorns” that reach out into space. In an adjoining room, a second, more massive board functions as a table. In both pieces, one detects a crucial connection to an ancient past.

Two large windows frame a private vista of the woods that are an important part of Cho’s creative environment. A tall chair rests beside one window, the patina of its hammered copper form resembling wood, the seat honed to fit the contour of the body. A water-tumbled pebble etched with an intricate and mysterious design sits in a reliquary niche in the chair’s back. Curved thorn-like spikes reappear in this piece, lining the outer perimeter of the chair, framing the whole. Nature is unmistakably important to Cho. Outside on the windows, two immense yet graceful spiders working busily in their intricate webs have been left undisturbed.

A flight of stairs leads down to Cho’s studio, a large bright space with several workbenches and antique chests, in which everything seems to be purposefully placed and well organized. His work area extends on one end to his forging room and to his jewelry studio on the other, where beyond a pair of sliding doors leading outside, he has installed a grinding machine on a cement platform. Cho works in a variety of metals: large-scale pieces of copper, silver, gold, platinum, Damascus steel, and mild steel for the traditional Korean inlay known as Po-mok saang-gum (damascene). He makes his own alloys, including traditional alloys such as 0-dong or 0-Kum (shibuichi).

Cho’s training as both a jeweler and sculptor in Korea and the United States has enabled him to make and alter tools specific to his needs. To achieve the technique of hammering on both a large and small scale common to his work, Cho has a unique variety of tools, from tiny punches and handmade miniature stakes to large texturing tools and one-of-a-kind hammers. Not satisfied with the contours found on commercially available anticlastic raising stakes, he forged his own from a ring mandrel. His favorite tool is a short yet heavy traditional Korean goldsmith’s hammer. For crosshatching the mild steel used in his damascene inlay work, Cho has a selection of short, sharp chisels. And to draw fine gold wire down to extremely fine gauge, he has a set of custom-made dies from Korea that go down to a minute opening of 0.12mm. Much of his smaller, jewelry forging work is done on a huge hardwood stump that would make most woodworkers envious. As a nearby drawing table, he has a beautifully finished massive butcher’s block, a relic of the days when butchers were considered skilled artisans.

Cho’s forging room is for work on a larger scale. Tall stumps with stakes, numerous hammers, and a forge made of carved firebrick fill the room. A rolling mill dedicated to use with red-hot steel stands ready nearby. Cho prefers thin crucibles of fine ceramic from Korea when melting his metals; they heat up more rapidly and allow for greater ease in pouring metal into ingots than do the thicker crucibles available in the U.S.

In a corner of hips jewelry studio, a stack of award ribbons, mostly blue, quietly reveals the success that Cho has achieved in the past eleven years since moving to the United States from Korea. Cho has received such prestigious awards as the biennial Tiffany Foundation Award (in 2003) and the Smithsonian Craft Show Excellence Award (in 2004). More prominently and proudly displayed, however, are his nine-year-old son’s drawings, as well as a traditional Korean armband above his bench symbolizing respect and mourning for the recent passing of his father.

Namu Cho sees his work as innovation on traditional techniques, creating a crossover from the traditional style. He is interested in other cultures as well, as a means of understanding his own: “If you don’t see others, you don’t see yours.” His creative time involves a lot of “play.” Currently he is experimenting with a traditional Korean textile technique, similar to “couching,” a form of patterned embroidery in metal using twisted 24k gold wire sewn to a fine mesh background with extremely fine 22k gold wire.

There are two constants that characterize Cho’s work, besides fine craftsmanship and a high level of creativity: a need for continual change, and in his words, “pushing higher.” Undoubtedly, in an artist of such uncommon skill and creative breadth, these needs will be admirably met in this environment, perfectly suited to his work.

Elizabeth Mcdevitt is a goldsmith, teacher, and art historian residing in Colorado Springs.