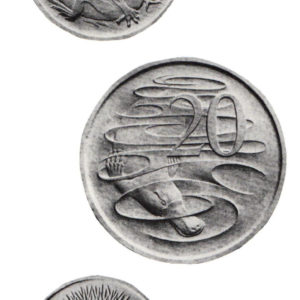 Stuart Devlin’s exhibition offered the viewer a feast, a visit to an Aladdin’s cave. The exhibition celebrated 25 years of achievement by an outstandingly innovative, creative and prolific designer. The abundance and range of the items on show astounded even the most seasoned exhibition goer.

On view were sleek teapots from the 1950s, as well as bejewelled eggs from the 70s. There were immense trophies and commemorative centrepieces commissioned by such diverse bodies as the Stock Exchange and the Dean and Chapter of Canterbury Cathedral. There were coins and candelabra, clocks and cufflinks, all products of dynamic and independent talent. The variety challenged the reason and the rich opulence dazzled the eye. 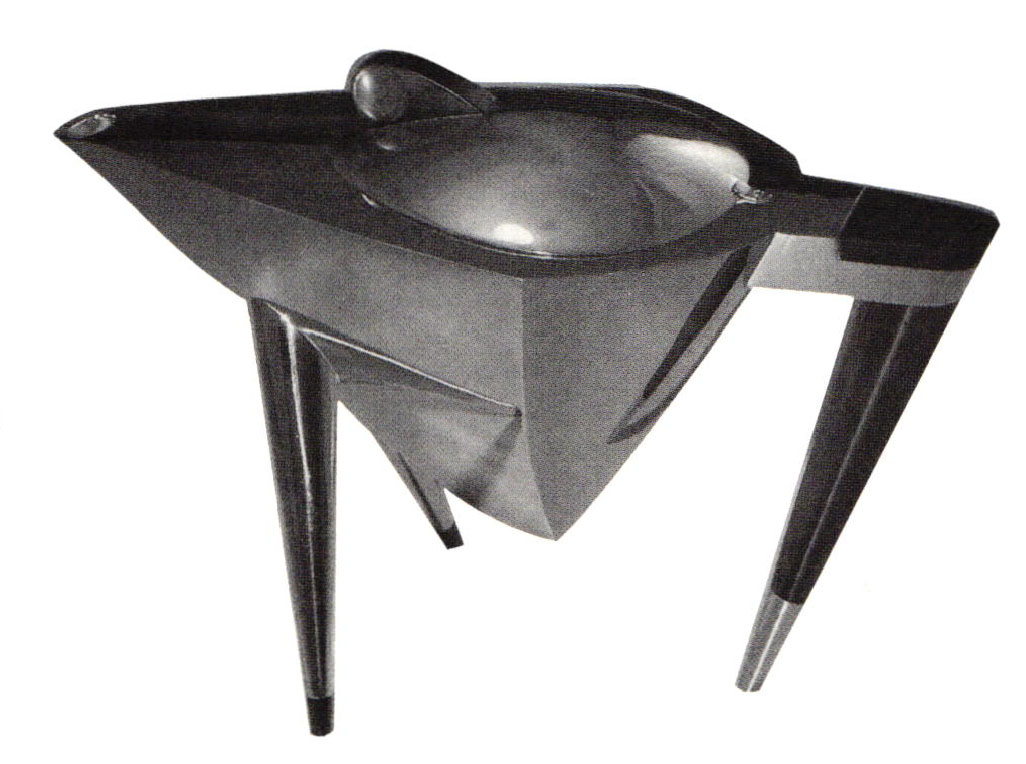 Stuart Devlin’s fellow goldsmiths owe him a double debt for he has overthrown convention and extended the boundaries of his craft. Over the years he has built up an efficient organisation in which work is delegated to a band of loyal and skillful craftsmen. By introducing modern managerial skills and using computers, he has demonstrated that the artist can succeed commercially and yet still retain high standards of design and manufacture.

He challenges convention in another way, for he is not restricted by traditional assumptions about the limitations of the artist’s role. He seeks perfection in the transferability of skill, design and function from one material to another, from one artifact to another. Although trained as a metalsmith, he now designs furniture, recreating in wood features such as filigree which he has extensively and successfully used in his work as a goldsmith. His approach is refreshingly independent and nonpurist, both in the manner in which he organises the production process and in the way in which he uses his chosen materials and the objects he fashions from them.

The lack of evident boundaries in his work may be derived from his Australian background. The eclectic nature of his cultural inheritance would free him from the more usual constraints of the European tradition and release his fertile imagination and the driving energy and enthusiasm with which he strives to rethink form and technique. So rich and abundant has been the flow of his ideas from his earliest days as an exceptionally successful student that the workshop can be seen as a natural development, necessary in order to carry out his designs. 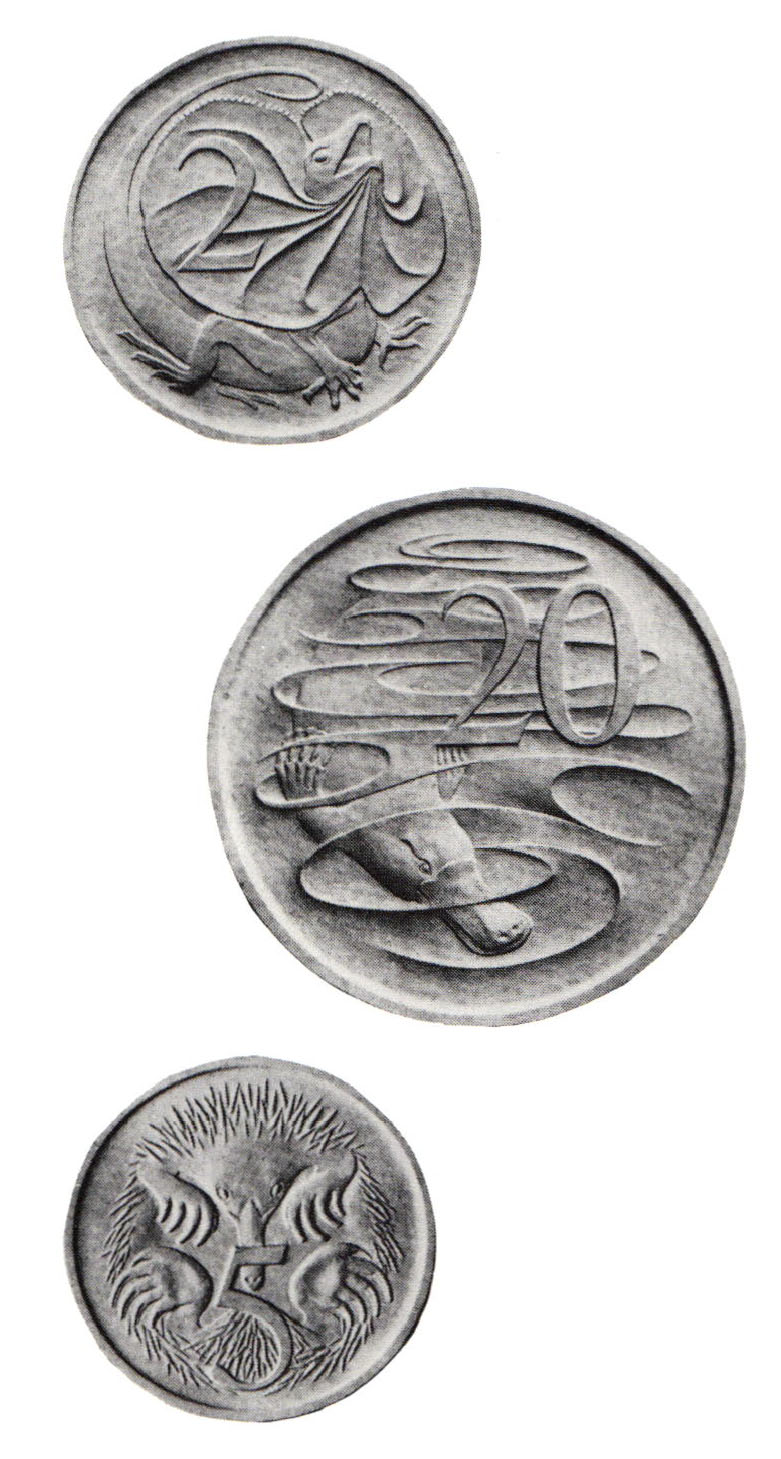 Stuart Devlin, Plaster models for Australian coins, 1963-1983
The first coins to be designed by Devlin marked a turning point in his career

The objects on display at the exhibition were remarkable for their technical skill. Stuart Devlin has, for example, conquered the problems of raising large containers and working on a monumental scale. A characteristic of his work is the way in which he marries contrasts. The viewer was shocked into rethinking longheld assumptions. The delicacy and fragility of filigree was seen to support a substantial highly polished tabletop. A paper knife had an ephemeral yet robust filigree twist for a handle. A decanter, clean and Scandinavian in silhouette had a deep band of gold texture round the neck. The scultpure Restrained was a pierced globe, which defied expectations by remaining supported on a length of brutal chain. The beauty and sensitivity of many of the items was also a delight. The designs for new Australian coins were charming, simple portraits of native animals, illustrations which conveyed their habits and qualities. In addition there was technical and mechanical ingenuity which gave versatility. A run of candelabra was hinged so that it might be arranged either in a sinuous line or in a closed group as required. Many of the exhibits were rich in their appeal to more than one sense. A particularly attractive ring formed from a graduated triangular section had unusual tactile and visual qualities. Other exhibits played with light. And there was also humour. The handle of a caddy spoon was a frog or an elephant, and a cracker waited to be pulled.

In an exhibition of such diverse and brilliant work, it seems almost churlish to express doubts. Yet the random free forms used by Stuart Devlin are reproduced so often, both as decoration and as integral structure, that spontaneity is endangered and enjoyment dulled. The frequent use of filigree in such a variety of applications is ingenious and can be regarded as pushing a theme to its limits. Could its use have benefitted from being more restricted? Perhaps his very superabundance of ideas, his constant seeking for novelty and the need to meet the demands of commissions generates its own problems of editing. The artist has a responsibility to act as his own critic and show discretion when purifying his ideas. There remains the problem of the conflict between scale and the artist’s personal statement.

Stuart Devlin’s work demands admiration and respect. It is powerful, dominant and aggressively confident. It is particularly remarkable for its range and volume. This was an outstanding exhibition and thanks are indeed due to those who organised the collection and to those who lent items for display.

All articles by this author
Previous The Work of John Marshall
Next Samuel Yellin, Metalworker
Social media