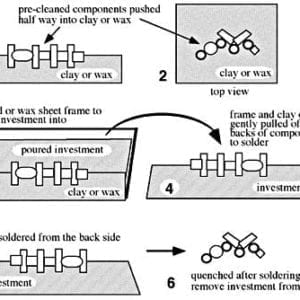 There is a great way of doing very complex and repeated solderings in one go.

This very important method uses casting and soldering investment is to set up multiple solderings at once. The idea is that you take clay (I prefer real clay, not plasticine – less oil and grease present to impede soldering) and make a ‘bed’ of it, a slab. Some people like to use a soft wax like ‘BonBell’ wax that covers small round cheeses instead of clay.

You take your jewelry components, pre-sanded and clean, and press them carefully into the clay (or wax) as you want them to appear when soldered together. That is, pushed tightly next to one another and to the half-way depth in the clay or wax. Then walls of some kind are built around the clay slab. Usually these are cardboard and duct tape or built using clay. Dentists would use ‘boxing wax’ for this job, this is the standard pink sheet wax that jewelers use to make jewelry models with, never suspecting its main purpose is to build ‘boxes’ for pouring investment into.

Finally the whole thing is quenched in water to remove the investment. Any remnants are brushed away under running water. Malika Hemachandra, a Sri Lankan I met in Colombo did this with hundreds of components at one time, one giant soldering job for innumerable stamped and cast parts and settings in one go.. She was making large, very complex neckpieces with dozens of stonesettings and hundreds of parts, all done with one soldering operation. She used an iron bust to set up the clay and investment soldering jig. 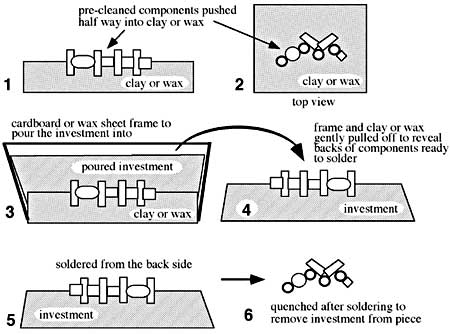 When I worked in a German factory in Pforzheim we used the same idea to make reusable soldering jigs with casting investment. Our jigs consisted of one third casting investment, one third Portland Cement and one third fibrous refractive material (ok-we used asbestos back then, these days you would use Fiberfax or a similar ceramic fiber). These jigs were for a repeatable production soldering set up. We would make the clay slab, set the components in, build the walls and pour the jig mixture in.

An interesting addition was to use broken sawblades as ‘rebar’ in the jig. When the jig mixture was halfway poured in broken sawblade pieces were sprinkled into it, and then they were buried as the mold frame was filled up with the investment mixture. They acted like the knobby iron rods use in concrete to increase strength: Rebar. This meant that even if the soldering jig cracked in use the webwork of broken sawblades within kept it from falling apart. Generally we could get about 50 solderings from such a jig before it broke down too much to use. So, at last, an excuse to keep your broken sawblades….