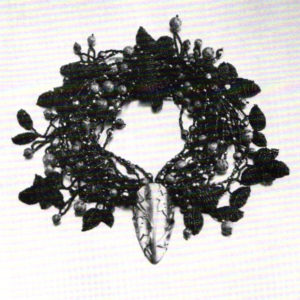 Recent thinking about jewelry has looked at the field in two ways: as an idea and as a practice. The idealists tend to think about the definition or limits of jewelry, and to produce objects that may be wearable but rarely are worn. Practitioners tend to think about jewelry in a market and social context, and intend their jewelry to be worn by their clientele. At present, the two discourses don’t have much to do with each other.

There has been plenty of good discussion about jewelry as idea, but less about practical jewelry. People speak of design, workability, technique and economics, but very little about the nature and function of jewelry as it’s worn.

So, what should practical jewelry do? Here is an object, on the body, being worn because it satisfies a motive of the wearer. That motive is involved with being seen and judged, in creating a first or second impression. Jewelry can be regarded as a bit of private propaganda, and its success in conveying its intended message might be a criterion of the object’s success. Wearers with to say something about themselves, to be seen as either the same as or different from their audience. Either way, the wearer hopes to be convincing. In the end, one of the functions of jewelry is to seduce others into thinking about the wearer in a specific way.

In a related vein, one could analyze jewelry in formal terms. A relatively small object is placed on the field of the body, in competition with clothing and with the surrounding environment. Because jewelry cannot resort to the careful isolation of an art object in its controlled (gallery or museum) setting, jewelry must be calculated to attract attention to itself. It must trade in the formal devices for making itself a focus of attention. These devices are the instruments of visual seduction: brilliant color, highly contrasting surfaces, absorbing detail, precious material. It is no accident that these same qualities are present in body adornment from almost every culture and historical epoch. Whether the material is gold and diamonds or bird-of-paradise feathers and cowrie shells, and whether the nose, ear or finger is being decorated, one purpose is the same: to seduce the audience. 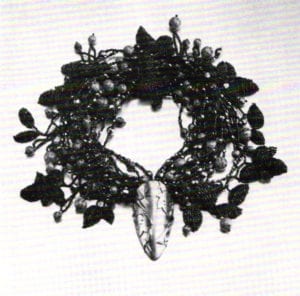 Thus the “jewel” is usually connected to a society’s standards of beauty. For Euro-American culture, this standard has related specifically to precious metals, gems and enamel. The influence of modern art has eroded the power and persuasiveness of such materials, and, for the past three decades, jewelers have searched for new materials and have incorporated new standards of beauty. Where the glitter of diamonds and the allure of gold once satisfied, studio jewelers have discovered plastics, base metals, found objects, fiber, even paper. But still, these materials are handled in such a manner as to render them attractive. The play of light on Carolyn Broadhead’s Famous monofilament veil is a lovely as the reflections from a faceted gem. The paintings of Pollock and De Kooning have taught us to appreciate the massed textures of a Lam de Wolf fabric collar. Truly ugly, intentionally ugly, jewelry is generally confined to the art schools and universities.

In the art academy, it’s held that making an attractive art object is easy, almost formulaic. One knows the pretty colors and pleasant themes, so producing seductive art poses no problem. Furthermore, to seduce the audience means to refuse to challenge any preconceptions or to expose any unpleasant realities. Thus, seduction is regarded as an evil. To call a painting seductive is to insult the artist. Modernism demands difficult art, an art that is critical of accepted standards and received ideologies.

A persuasive case for the Modernist rejection of seductiveness was provided by this year’s New Art Forms Exposition in Chicago. I found hundreds of delectable forms, dozens of enticing glazes and acres of ravishing glass. Prettiness and loveliness multiplied, uncontrolled and unchallenged. The craft market is moved by seduction in a bit way. In the midst of all the glitz, however, I found precious little that seemed adventurous, or thoughtful, or even beautiful. Most of the visual interest has moved to the surface, and it seemed as if every object was trying to proclaim its attractiveness more emphatically than the next. After a couple hours of this, I was bored and somewhat depressed. It was as if somebody was playing a piano that had extraordinary tone, but only one note. All the sparkling objects eventually seemed relentless and monotonous.

In the end, to blame my feelings of monotony on seductiveness would be a mistake. The problem was not so much that the crafts in Chicago were ruthlessly attractive, but that they offered nothing beyond their prettiness. The devices of visual seduction are like a door, and it’s the room beyond that ultimately interesting. An object can offer all kinds of delights and temptations to the eye, but those pleasures can begin to lade after the second or third viewing. To sustain one’s interest, deeper pleasures and subtexts must be offered. Seduction it like an invitation, an embellishment, on the doorway that beckons a viewer on to more subtle enjoyments and meditations.

Practical jewelry needs seduction. Overly plain jewelry gets lost on the body. Ugly jewelry repels. Practical jewelry must appeal in order to remain visible and convincing. That much everybody knows intuitively. But glitter and glitz is only the doorway, and the question remains as to what the fancy invitation is for.