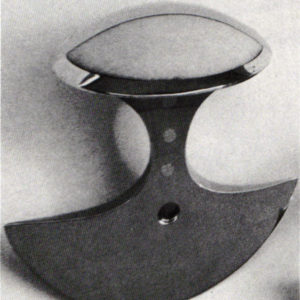 The term fashion does not immediately bring to mind knives. But wait! The 1895 Montgomery Ward & Co. catalog offered 131 varieties of pocket knives. They were classified as: “men’s,” “ladies’,” “boys” and “men’s heavy pocket and hunting.” Although perceptible differences existed between categories, there were relatively slight variations within categories.

Such overproduction continues today as stylistic “innovation” invades our humblest utilitarian items—the knife, the watch, the ring, the button or the paperclip. Moralists have a field day with this abuse of creative effort, since this surplus of designs does little to improve human existence. The conclusion must be drawn that the forces of fashion, change and “difference” sustain this stylistic overproduction. The four classes of pocket knives offered by Montgomery Ward were divided not only by function but more importantly by sex and age of the user. These distinctions rested on the assumption that the consumers/users saw themselves as different according to sex, class or rank and wanted the products they purchased to reflect that difference. 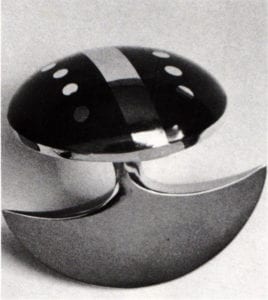 In dress, fashion’s customary milieu, there has been a legitimate history of style that complements obvious gender differences. Only during the brief hiatus of the 1960s did unisex clothing challenge this basic assumption. However, such differentiation cannot be applied to personal accessories such as combs, watches, rings or knives. The variety of their designs are best explained as a conformity to received ideas of what is customary and proper to men and women—to notions of femininity and masculinity—not to biological difference but to social convention.

I think it unlikely that one can ascertain differences between the way men use knives and the way women use knives—cutting and slicing is not gender specific. Back in 1895, women’s knives were always smaller and had pearl or white handles to reinforce the feminine assets of cleanliness, delicacy and preciousness. In wristwatches, there is little disparity between a woman’s wrist and a man’s. Yet, women watches traditionally are more delicate and ornamented. Men’s watch faces are usually, strong, bold and aggressive, with Roman numerals, while women’s are curvilinear with delicate Arabic numerals, colorfully bejeweled with sensuous stones. Although these themes have been somewhat modified according to the decorative trends of the time, the underlying sexual differences still pervade the orientation of both maker and user.

These vagaries of fashion, dismissed in the past as ephemeral strategies of commercial exploitation, have acquired deeper significance in the current climate of feminist ideas of representation and sexuality. In the past we held the belief that the object was the result of a specific maker’s expressive intent, which found an empathetic reception by a specific user. It was a closed system of exchange between maker and audience. Currently, there is a growing awareness that this relationship changes as objects are read differently during different periods. Miniskirts, for example, were seen differently in the 60s than they are in the 80s.

What is at work here is that the conditions of reception, relations of context and use and social conventions determine not only what is made but how it is made and, ultimately, how the user is seen in society. This shift from artistic products to representation of meaning stems from the idea that consumption completes production, that is, once a woman buys a product she not only satisfies her desire for the product but also confirms the notion of femininity implied by the product. The maker, the object, the user, the society are all caught up in the web of representation. The reality of what it is to be a woman cannot be separated from the objects that materialize her personality. Isn’t that what jewelry is all about? Representation evidenced by the jewelry cannot be considered neutral by the maker; it acts to regulate and define the user it addresses, positioning her or him by class or sex in active or passive relations to meaning. Over time, these fixed positions acquire the status of identity and categorization. 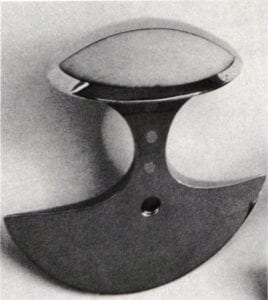 The class of objects that the metalsmith engages—jewelry, holloware, flatware, tools and knives—is distinct from clothing but inseparable from fashion. In the best sense, these objects are neutral as to use and function yet ultimately bound by representation. The diversity we find in the field cannot be attributed to function, since most designs offer little new as to methods of cutting or even wearing. And an argument as to the value of the “ingenious” designer does not hold water because no matter how ingenious, by definition these classes of objects imply the complicity of a specific user. They are not self-indulgent and must take into account the psychological and social baggage that determines the user’s acceptance.

What is left is the interpretation of the metalsmith as a player in the game of representation, caught, as I have said earlier, in the web of significance that includes sex and class. When metalsmithing forms are characterized by strength, beauty or emotion, we should be conscious of the apparent differences of interpretation, which, in a gender-conscious society, betray a confusion of actual physical differences with attributed psychological ones. Through the design of knives, rings, flatware or bracelets, one can read the shape of society as the maker saw it and as the user adopted it. For as in all forms of representation (painting, film, etc.), the makers must be cognizant not only of the self-reflective language of metaphor and symbolism but also of the social distinction that might be invisible to them or to which they might be indifferent.

Thanks to Adrian Forty and his pioneering study Objects of Desire.

By A. Stiletto
Metalsmith Magazine – 1988 Summer
In association with SNAG‘s