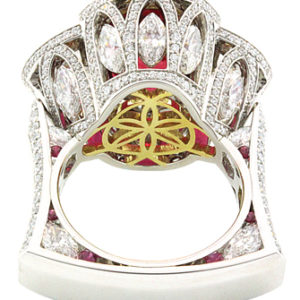 Temple of the Sacred Heart

Sometimes a design becomes more than the sum of its parts. Designer Cristopher Olson and master jeweler Paul Schaaf of Molina Fine Jewelers in Phoenix collaborated on just such a piece, which they named Temple of the Sacred Heart. The platinum ring features a 10.05 carat oval untreated Thai ruby and almost 400 diamonds totaling more than 5 carats. The ring won Platinum Honors in the Classical category of the 2011 AGTA Spectrum Awards. 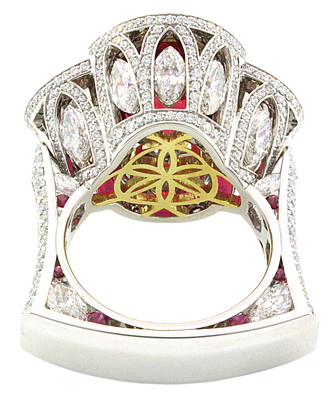 Based on both Notre Dame Cathedral in Paris and a California temple, the design came to Olson during meditation. He chose the gemstones for their healing qualities. “Diamonds amplify the healing properties of other gemstones and symbolize innocence and faith,” he says. “Rubies inspire one to follow their bliss, and have the meaning of love and confidence.”

Working from Olson’s hand rendering, the team collaborated on the details when inputting the design into CAD. “We wanted to accomplish something neither of us had seen or done before,” says Olson. The top section of the ring is a roomthe place of worshipwith what appear to be floating “stained glass” marquise diamonds on the sides. 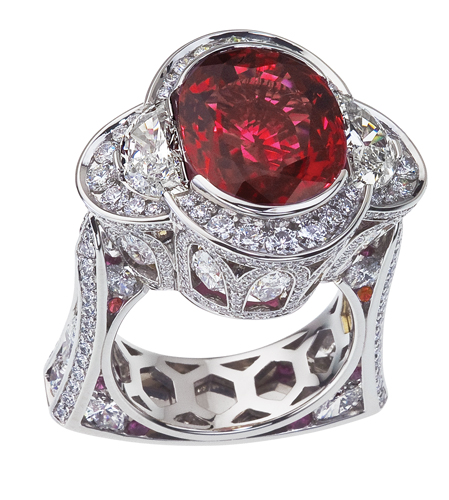 Schaaf milled the ring in five pieces. “Our goal was to have a hand-finished look, so we created it out of far more parts than we needed, then polished and removed the milling lines from every surface before we [cast it],” says Schaaf. “It really looks like a hand-fabricated piece.” Four of the components were cast in platinum: the top in two halves (imagine it sliced in half from east to west), an inner shank with a cutout grid pattern, and an outer shank. The fifth component, a disc with an open scrollwork pattern that nestles beneath the ring top, was cast in 18k yellow gold.

After pre-finishing, they laser welded the two halves of the top together because Schaaf didn’t want to work with a solder seam when he would later drill and set the stones. After seating the ruby in its cast-in setting, as well as seating the two 1.47 carat total weight half-moon diamonds that flank it, he removed the stones and soldered three flat pieces of platinum around where each diamond would sit, creating partial bezels for each. He wanted the platinum “settings” for the half moons to be as thin and as unobtrusive as possible. The inner shank was next laser tacked and then soldered to the top section of the ring. 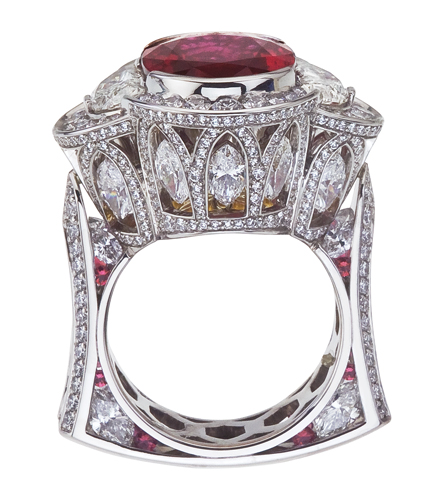 He then channel-set the round diamonds on the top of the ring, channel-set the marquise diamonds around the perimeter of the ring top, and micro-bead set all of the small round diamonds on the top section. Because the outer shank sits over some of the top’s stones, he waited until this point to slide the outer shank over the inner shank from the side and soldered it at each point of contact. He then soldered the 18k yellow gold disc beneath the ring top.

He first channel-set the marquise and round diamonds on the sides of the shank, then bead-set those around them, and finally channel-set the marquise diamonds (four on the north and south side of the shank) and rubies (six on each side) between the two shanks. Last, he set the half-moon shaped diamonds and the central ruby. Polished at each step, the ring needed just a quick final polish and it was completeafter 200 hours of loving labor.

“I had a vision in my mind of how it was going to come out,” says Schaaf. “Even before setting the ruby, I thought ‘Wow.'” But he was in for another treat when light entering through the ruby reflected off the highly polished platinum interior. “The most surprising thing was the effect of the inside of the crown turning red after setting the ruby, the way the whole thing began to glow red. I just started to smile.”