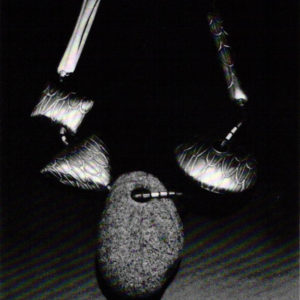 Roll printing, or texture transfer, has been around a long time. The ancient Greeks and Romans used various dies and, of course, every well-appointed Sumerian had a cylinder seal with which to authenticate his signature. Both of these employ the same principle as roll printing. When you think of it, the most surprising aspect of roll printing is the fact that it took so long to become a part of the studio repertoire.

In its favor, roll printing has simplicity and versatility. In a matter of minutes the process can be observed and understood. It can be used on all the usual jewelry metals and has equal affinity for all sorts of objects.

The technique consists simply of squeezing a textured material into a sheet of metal by using the force of the rolling mill. It is a wise practice to protect the rollers by sandwiching the impressing material between sheets of copper, brass or silver. By thinking ahead to which sheet is hardest or which is annealed and which work-hardened, it’s possible to more or less direct the force of the impression.

If it’s such a delight, then, why is it so basely abused? The wealth of texture materials is literally inexhaustible. Fabrics, papers, mesh and wires come to mind and represent only the first blush of the possibilities. Why, I’m told that even window screening can be used. 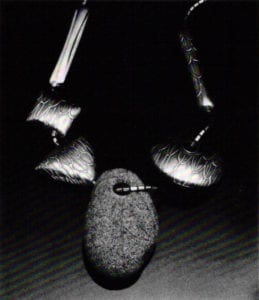 Yes, there’s the problem. This single bit of texture has been sadly overused. It is followed, at least in my experience, by burlap and sandpaper. Such unimaginative use of roll printing not only fails to exploit this technique for what it’s worth but also offends me to the point that I react negatively to the piece. Show me an object with screening and I’ll show you an underdog that has to be especially good in form, color or image to overcome this dead giveaway of lazy thinking. Casual decisions based on available materials rarely culminate in deeply meaningful work, no matter how enticing the technique.

By contrast I think of the work several people, among them Jan Yager. In her work, as illustrated in the necklace shown here, the embossed surface takes its place alongside form and composition as an ingredient of equal importance. The highly polished pillow shapes present their recurring pattern in a series of alternate formats. These engage the viewer through their subtle differences. The natural stone and smooth-surfaced bead provide relief and contrast to the pattern and, in the end, locus attention on it. This kind of embossing is more than simply a quick way to break up a surface before “really getting down to work.” It is an integral part of the sense of the piece.

Metalsmiths making the best use of roll printing do not rely on textures that fall into their hands but create matrices that can then be printed. Parent forms are created by etching, engraving, fabricating and stamping. This not only shows a respect for the rich possibilities of the technique but also allows the artist to enter the process at a deeper level. The talents of the metalsmith—gesture, image, scale, rhythm—all are at work in a proper matrix. And when all this is present in the initial form, the resulting impression can hardly help but succeed.