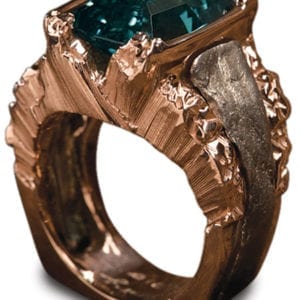 With textures that echo the Patagonian mountains of Chile, the Torres del Paine Ring by Cynthia Renée Zava of Cynthia Rene Inc. in Chapel Hill, North Carolina, tells the tale of one family’s moving experiences on a trip to Chile. Zava tells the story of her longtime client, Mary, whose father is Chilean:

Mary, her husband, and their children joined her parents on a trip to Chile to visit their Chilean relatives and tour Patagonia, the remote mountainous southern tip of the country known for its massive granite towers and glaciers. After a few days of outdoor play in the Torres del Paine National Park in Patagonia, Mary’s father suffered a massive heart attack. The closest medical care required an 11-hour car trip to a primitive hospital. From there, her father was airlifted to a more modern hospital in the nation’s capital. He eventually recovered, and the trip they planned for fun and frolic became a turning point for the family, who had been united in their love, faith, and eventual renewal.

Zava set out to create a ring that would capture this life-changing experience and serve as a constant reminder of its powerful impact on the family. “As Mary told me this story, I wondered how we would commemorate the feelings in a piece of jewelry,” says Zava. The resulting design, the Torres del Paine Ring, took first place in the Custom Design Distinction Category of the 2011 MJSA Vision Awards design competition. 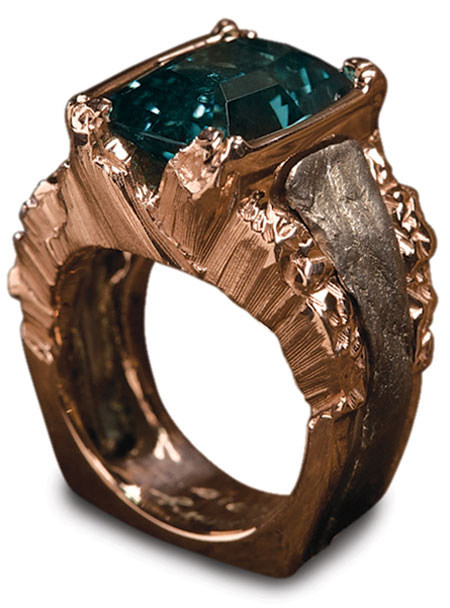 Zava and Mary decided that it would be fitting to use the one Ice Blue Tourmaline from Afghanistan remaining from a previous commission as the center stone in the ring, as it matched the color of Mary’s daughter’s eyes. The unusual blue was also reminiscent of the glacial lakes and ice of Patagonia, where their family saga started.

Before designing the ring around the tourmaline, Zava viewed photos from the trip. She was struck by an image of the Patagonian mountains glowing with pink “alpenglow” at sunset. “I wanted a profile of the jagged mountain ridges to be seen in the ring’s sides, so I decided to cast the rocky outer portion of the ring in 14k rose gold,” she says.

And as glaciers carved the Patagonian mountains’ sharp peaks and ridges, an expansive white gold “glacier” would be placed between the ring’s rose gold mountains. “After the rose-gold mountain frame was cast, I visited Mary and her family, bringing sheets of soft wax to form the inner white-gold glacial portion,” explains Zava. To help achieve this section’s matte texture, Mary and her children, husband, and parents imprinted their overlapping fingerprints onto the wax sheet. “The texture wouldn’t be recognizable as fingerprints, but they would know they were there together, leaving their marks,” she says.

After casting the central portion of the ring in 14k white gold, Zava left it rough-finished and didn’t polish it — preserving the raw, natural texture of the overlapping fingerprints. She later oxidized it and laser welded it into the mounting.

Zava realized that she could use the “horns” of the ridges as prongs for the tourmaline. As a result, the stone is held by the mountaintops and offered to the heavens, much like the family’s prayers were during their ordeal. “As this ring is passed over the generations,” says Zava, “it will be a tangible reminder of the enduring quality of family love and beauty.”