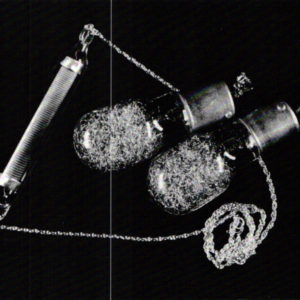 This article series from Metalsmith Magazine is named “Recent Sightings” and here Bruce Metcalf talks about art, craftmanship, design, the artists, and techniques. For this 1987 Summer issue, he talks about  defining jewelry, its concept and what  the field of jewelry means.

Seeking a definition is more than an academic exercise. One hopes that the process of defining will shed new light on the subject at hand. Unfortunately, while it’s possible to define carbon or oxygen with some precision, terms in the visual arts defy accurate elucidation. Critics and theorists have been arguing for centuries about the meaning of “painting’ or “sculpture,” and the resolutions of one generation disintegrate as the next one examines the question.

In the “New American Jewelry” class last summer at Kent State, we attempted to define what we know as jewelry. Instead of resolving the term in a single sentence, we arrived at a list of seven functions that circumscribe the field. 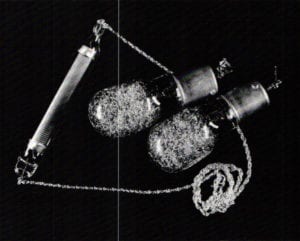 First: Jewelry is traditionally made to be attached to the body, as in rings, bracelets, necklaces. headdresses. etc. Other types of jewelry are attached to garments, as in pins, penanrular brooches and buttons. Some varieties demand alteration of the body, as in earrings for pierced ears and lip plugs. Although there are other types of jewelry (hairpins, combs. barrettes, pasties, etc.) they all maintain a physical relationship to the human form. (The line between garments and jewelry is vague: certainly garments can be metal chainmail and jewelry can be made of fiber. Similarly, the scale and enveloping quality of garments has become the territory of jewelers: Susanna Heron’s “hats” and Caroline Broadhead’s veils come to mind.)

Second: Jewelry has always been used as decoration, an adornment that provides visual accents and texture and focuses attention on particular parts of the body. But the urge to decorate satisfies psychological motives as well: it beautifies and on occasion renders the wearer socially or sexually desirable. On the body, decoration always has a subtext. One cannot underestimate the power of jewelry to enhance self-image and to alter social perceptions. The purpose of jewelry is, in part, a subtle control of the coded message that every person imparts.

Third: In many traditional cultures, jewelry serves as a redeemable investment. Women the world over wear a substantial portion of their wealth in jewelry, which can be converted into goods and services as the need arises. (Perhaps jewelry also functioned as life-insurance policies: in the event of the death of a husband in a patriarchal society, the wife still had wealth to guarantee her family’s survival.)

Ganoksin is sponsored by
Third: In many traditional cultures, jewelry serves as a redeemable investment. Women the world over wear a substantial portion of their wealth in jewelry, which can be converted into goods and services as the need arises. (Perhaps jewelry also functioned as life-insurance policies: in the event of the death of a husband in a patriarchal society, the wife still had wealth to guarantee her family’s survival.)

Fourth: Jewelry always has been associated with the spiritual and the supernatural. Amulets and talismans appear in every culture, offering magical protection and powers to the wearer. Sacred symbols are frequently made wearable, the crucifix and the Star of David are two familiar examples. The intimate contact between symbol and body becomes a constant reminder of one’s faith and the promise of security and protection. The mystical overtones of jewelry are very attractive to Americans—William Harper’s talismanic brooches, for example.

Fifth: Another important function of jewelry has been to mark social identity and status. Adornment has historically been used to either distinguish or merge the various social groups. Military insignias do both; for instance, the bars a captain wears identify him as belonging to a particular service (the same as any other soldier) but also identify a particular rank (the difference between a captain and general). Large diamonds on rings announce that the wearer is wealthy; razor blades hung around the neck announce the wearer is a late-blooming punk. The diamond ring worn at the country club indicates conformity and calls for acceptance, but the same ring worn in a punk bar might be asking for trouble. In every case, jewelry is a marker, communicating in a subtle code that members of the same culture recognize instantly and intuitively.

Each of these functions defines jewelry to some extent. Most jewelry fulfills several functions simultaneously, setting up a layering of use and meaning that is sometimes confusing, even contradictory. All of these uses operate in Western society today, every bit as much as they operate in preliterate societies. In spite of all our technical sophistication, people still use jewelry for much the same reasons as the most “primitive” of African tribesmen.

Sixth: Another historical constant is the astonishingly wide range of material employed for jewelry. The Western European view that metal is the medium of choice for adornment is rather narrow. Even in the European tradition, stone, wood, beads, leather, glass and even human hair have been employed for jewelry making. A cursory study of non-Western cultures shows an even wider range: feathers, horn. lacquer, clay, cloth, straw and hundreds of other materials are used in adornment. The rebel jewelers of the early 1980s who disdained metal shocked only those who disavowed the pan-cultural history of jewelry.

Seventh: I perceive a criteria for jewelry that is comparatively new and profoundly influenced by 20th-century art. A number of jewelers see their products as having an imaginative function beyond a physical one. In this case, jewelry might attach to the body or occupy space near the body but is clearly not for everyday use. This work is analogous to a pot without a bottom, alluding to function without being functional. In this sense, Ron Nagle’s pots and Peter Voulkos’s plates are similar to Marjorie Schick’s wooden neckpieces. Jewelers are starting to use adornment as a vehicle for artistic issues. Jewelry has become a device for personal expression and conceptual exploration. The subject might be formalism (Emmy Van Leersum), social critique (Otto Kunzli), craftsmanship (John Paul Miller) or the limits of adornment (Pierre Degen), but in each case jewelry becomes a platform for the artist’s agenda. This development seems to be unique to the industrialized West and reflects the an world’s current bias towards the conceptual.

Although jewelry overlaps sculpture on one side and garments on the other, the ultimate question for each jeweler is: “What do you wish to communicate?” I hope that a close examination of the seven functions I have described will make us all more aware of the rich potential of adornment and give us a clearer definition of both our ends and our means.

All articles by this author
Previous Metalsmith ’87 Summer: Exhibition Reviews
Next The Cliche of Modern Art Appreciation
Social media