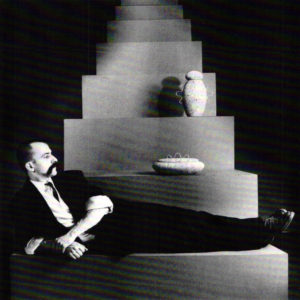 In October 1986, Amsterdam’s Galeria RA will mark its tenth anniversary in the forefront of Europe’s experimental jewelry movement. To celebrate the occasion, found-director Paul Derrez has invited the 80 or so artists who have been associated with his gallery to create a special piece for a jubilee exhibition. The anticipated result will be not only a testament to Derrez’s legacy but also a survey of experimental jewelry design today.

In the mid-60s, new social and political leads swept across Europe. In Holland, the vanguard of jewelry designers such as Emmy van Leersum, Gijs Bakker and Francoise van den Bosch, reacted against the concept of jewelry as an ornate display of wealth and status. Their work was minimal, geometric and made of nonprecious materials such as aluminum and stainless steel.

Galerie Sieraad, opened in Amsterdam in 1969 by Lous Martin and Hans Appenzeller, became the first showcase for this new jewelry. It featured new designs made in small editions (five to 50 pieces), which could be sold at price the general public could afford. After completing his education as a jewelry designer, Paul Derrez worked at Sieraad, gaining invaluable experience.

By the time Galerie Sieraad closed its dorrs in 1974, a new generation of Dutch jewelers had finished its education, and the severe, minimal designs of the first group gave way to a burgeoning of new ideas. To provide an outlet for this surge of creativity, Derrez established Galerie RA in 1976 in the basement of the 17th-century house where he lived.

The second half of the 1970s was a lively period of new ideas in jewelry. It was a time of great creativity and experimentation with wearables of every shape and dimension. Emphasis on cheap materials prevailed. Experiment with precious materials was financially impossible, of course, but the choice of inexpensive, “anti-establishment” materials was principally a reaction against the traditional role of jewelry. Gold was “out” in Holland; garden hose, knitting needles, magnifying glass and other everyday objects were transformed into simple but often witty jewelry. 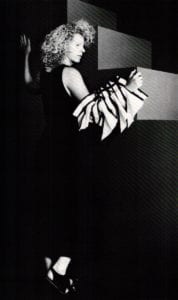 From the start, Derrez’s goals were threefold:

A gallery depends on the work that is currently produced to set the style and direction of the day, but since Galerie RA was the only game in town, it was able to stimulate trends and confer legitimacy. Noteworthy in this respect was the emphasis Derrez gave to body adornment made by artists in other disciplines, especially fiber. He organized important exhibitions of work by such artists as Mecky van den Brink, Beppe Kessler, Lam de Wolf and Kai Chan. 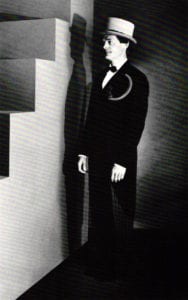 Derrez resisted the trend among art jewelers towards unique pieces which are expensive and which, like traditional fine jewelry, are accessible only to the elite. He favored “democratization of good design” by means of multiples, the use of inexpensive materials and simplicity of construction. The image of his gallery today, with its emphasis on lower prices, was largely formed by this belief in popularization.

Over the years, Gallerie RA’s international contacts have grown, especially with artists working in Germany and England. Exhibitions by foreign artists, including Otto Künzli, Johanna Hess-Dahm, Esther Knobel, Caroline Broadhead, Julia Manheim and Pierre Degan, enlivened the scene in Holland. More recently, there has been sporadic contact with the United States: work by Majorie Schick and Robin Quigley has been shown at the gallery, and Derrez spoke at the 1985 Society of North American Goldsmith’s Conference in Toronto.

Critical acclaim, however, does not guarantee financial success, and it was not until 1983 that Derrez was able to move Galerie RA from his cramped basement to a larger, modern space in a good, visible location. The move has made the gallery more accessible to the general public and has expanded its clientele. The gallery’s functions have remained unchanged—monthly exhibitions, a “permanent collection” and an information center—but the whole operation has become larger and more professional. The monthly show announcements have grown into the “RA Bulletin,” newsletter in poster format, with information about forthcoming events, available catalogs and other gallery news in both Dutch and English. From a small “cult” gallery for insiders Galerie RA has become an international mecca. 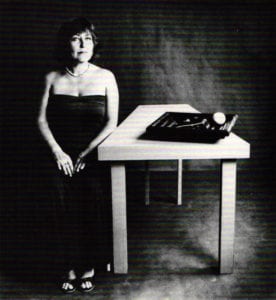 Today, Galerie RA is no longer the only contemporary jewelry gallery in Holland; many have opened all over the country, often modeled on RA’s example. Responding to the diversity in jewelry design, a trend towards specialization has appeared among galleries as well.

Ironically, with all this activity, the general feeling of optimism and enthusiasm for the “cause” of experimental jewelry is faltering among artists. They find themselves racing to keep up with demands of galleries and preparing for exhibitions, so busy producing pieces that they have no time to pursue new ideas and develop new designs. Despite the success of their work, many are still living in near-poverty—a state they may have found acceptable some years ago as young single people but frustrating today as 40-year-olds with family responsibilities. To solve this problem some artists opt for one-of-a-kind, expensive work, shown exclusively in solo exhibitions, while others concentrate on a better organized production line.

In contrast to this situation, Galerie RA’s jubilee exhibition will be a welcome international event. The new work created by some 80 jewelry innovators will offer a stimulating alternative for both artists and general public alike, it is hoped that it will influence the future of the jewelry design as well as the future of Galerie RA. Knowing of Paul Derrez’s enthusiasm and commitment, one looks forward to his next 10 years with eager curiousity.

Joke van Ommen is a jeweler who also owns VO Galerie in Washington, D.C., which, together with Spektrum in Munich and V & V Galerie in Vienna, specializes in international experimental jewelry.

All articles by this author
Previous Cybernetic Jewelry: A Systems Approach
Next Naum Slutzky Jewelry at the Bauhaus
Social media