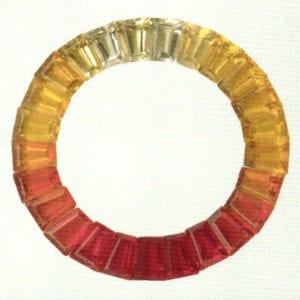 Home » Learning Center » Jewelry Design » Opals: All the Colors of the Rainbow

Opals: All the Colors of the Rainbow

Due to their magical variety of color, opals are evocative of a solidified rainbow. These gemstones seem to have captured all the colors of nature. Be it the orange-red tint of fire, the rich green of a thick forest of the marine blue of the ocean, this stone’s harmonious symphony of color embraces the entire spectrum along with its infinity of nuances, all of which is mysteriously enveloped in a most delicate veil. 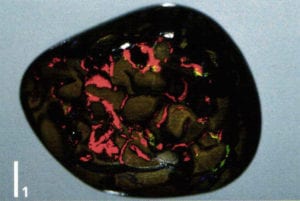 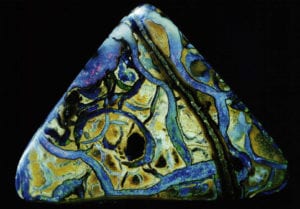 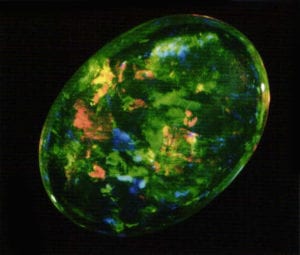 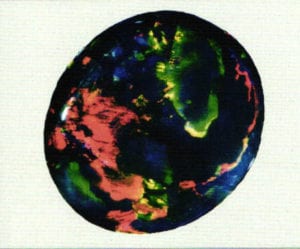 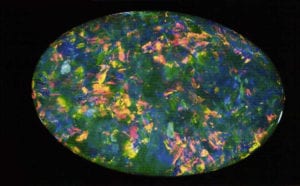 The origins of the name opal can be traced back to the old Sanskrit word “upala” and translates as “precious stone”. In India, opals are believed to bring good luck. The Roman author Plinius described opal as a stone which captures all the positive qualities of the most beautiful gemstones. The gentle fire of carbuncle, the resplendent purple of amethyst, the gold-tinged yellow of topaz, and the deep blue of sapphire are all “combined in such a way as to allow the colors to blend together magnificently”. According to old Australian legend, opals originated in the ancient dream time of the aborigines. It is reported that the creator descended to earth on a rainbow in order to deliver a message of peace to his people. As soon as he reached the ground, the stones beneath his feet began to come alive and radiate all the colors of the rainbow. That was the birth of opal.

The attraction of the Australian outback

Up until the first half of the nineteenth century, opals were quite a rare commodity. It wasn’t until substantial finds appeared in Australia that this precious stone enjoyed the start of a successful career. The story begins with the discovery of the first opal mines in Queensland in the year 1872. Shortly afterwards, in 1887, large deposits were found in White Cliffs and Lightning Ridge. From 1890 onwards, moves were made toward large-scale mining. The American Gold Rush in Klondike found its counterpart in the attraction of intrepid adventurers involved in a frantic search for opals in the Australian outback. Even to this day, the eyes of opal enthusiasts light up at the mention of such legendary opal mines as Andamooka or Coober Pedy. Many mines are still active. Lightning Ridge, for example, is home to the much coveted “Black Opal”. The largest existing opal, which weighs 6843 kg and is known as the “Desert Flame of Andamooka” originates from the Andamooka mines where the varieties of Crystal Opal and Light Opal see the light of day. The term Coober Peddy is aboriginal in its origins and literally means “white man in a hole”. It provides us with a vivid graphic image of how these richly colored gemstones were sought after. Many opal seekers found shelter from the merciless heat of the day and the cold winds of the night in the many deep holes that were carved out in the ground. For the most part, prospectors worked with the modest means of a shovel and pick. Buckets full of soil, hopefully containing opal rocks, were pulled up out of the depths of 5 to 40 m deep shafts by hand, for this is the depth of the opal containing crevices and cavities, which are also mined nowadays. The search for opals still remains quite a thankless task despite the help of more recent technical developments in the form of trucks and conveyor belts. However, it is the hope of happening across the find of a lifetime that continues to attract men and women alike to the hot and dusty Australian outback.

A gel consisting of silicic acid and water

The history of Australian opal actually began a million years ago when parts of Australia were covered by a vast inland lake and stone sediment was deposited along its shoreline. When the water masses retreated, they flushed water rich with silica deposits into the resulting cavities and niches in the sedimentary rocks along with the remains of plants and animals. Over time, the silicon gradually turned into opal. Therefore, opals are essentially a gel consisting of silicic acid and varying percentages of water.

Around the turn of the twentieth century opal was the most popular jewelry stone in Europe. The British Queen Victoria had her crown jewels decorated with this gemstone. She also commissioned a piece of wedding Jewelry with an opal inlay for her daughters. Art Nouveau discovered this colorful stone for its playful composition of jewelry. The jewelry artists of that time loved the stone for its discreet charisma which harmonizes perfectly with the appeal of enamel. From the very beginning, there was a small village in Hunsrück that played a central role in the skillful craftsmanship required for the stone: its name is Idar-Oberstein. Stone cutters were quick to spot the market potential and bought up vast quantities of raw opal which then traveled to Europe as ballast in the bow of large sailing ships. As a result of their significance for the indigenous opal mines, Idar-Oberstein and the neighboring town of Kirschweiler were actually marked in on Australian school atlases. It is, however, Australia itself which has remained the classical home of opal. Almost 95 percent of opals come form Down Under. The remaining 5 per cent can be found in gemstone mines in Mexico and in North Brazil as well as in the US states of ldaho and Nevada and more recently in Ethiopia and the West African country of Mali. 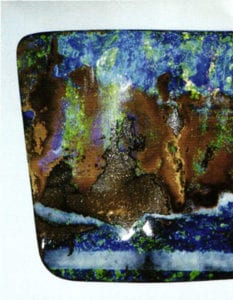 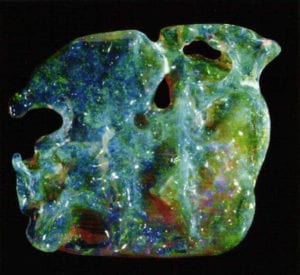 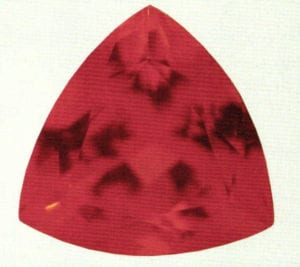 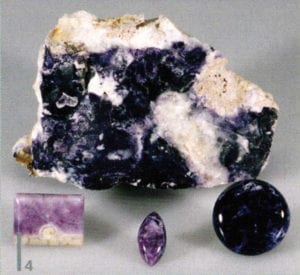 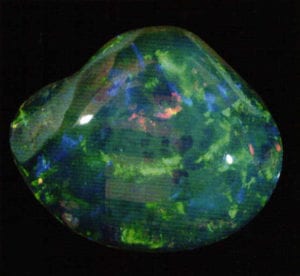 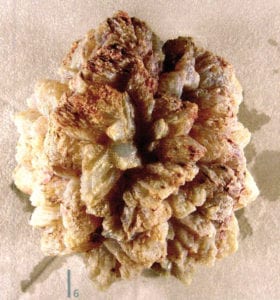 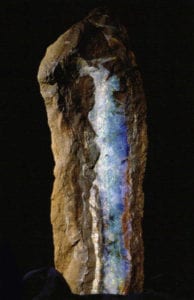 Opals exist in a number of varieties

The group of Fine Opals includes quite a number of wonderful gemstones, which share one common characteristic: they shine and sparkle in a continually changing play of colors full of fantasy, which experts refer to as “opalising”. Depending on the kind of stone, its place of occurrence, and its color, distinctions are made between Dark or Black Opal, White or Light Opal, Milk or Crystal Opal, Boulder Opal, Opal Matrix, Yowah Nuts from Queensland – the so-called “picture stones”, and also Fire Opal. Opal variations are practically unlimited. These gemstones distinguish themselves by means of a very unique play of colors – except for Fire Opal, which due to its transparency, however, is also considered a Fine Opal specimen. Should an opal lack the characteristic play of colors, it is simply called “Common Opal”.

But what causes this special play of color? This question was impossible to answer for a very long time. It was only in the 1960s when a team of Australian scientists analyzed opals with an electron microscope that it was discovered how small spheres from silica gel caused interference and refraction manifestations, which are responsible for the fantastic play of colors. The spheres, which are arranged in more or less compact structures, succeed in dissecting the light on its passage through the gemstone and turning it into all the colors of the rainbow, always new and always different.

Black Opal or opal with a dark grey body shows the most brilliant play of colors imaginable. Crystal Opal, which comes immediately after Black Opal in the hit list, should be more transparent with a deep play of colors. White or Milky Opals show more diffuse colors and are the least expensive opals.

In order to best bring out the play of color in a Fine Opal, the stones are cut and polished to round or oval cabochons, or any other softly domed shape, depending on the raw material. Only the best qualities of Fire Opal, however, are suited to faceting. The opal cutter will first of all carefully remove any impurities using a diamond cutting wheel before working out the rough basic shape. Thereafter comes the fine cutting, the finishing with sandpaper and then the final polishing with a wet leather wheel.

Opal is often found as flat lenses, or thin layers, whereas bigger pieces are rather rare. If you leave a thin but supporting layer of the harder mother rock, you will end of with a pre-stage of the opal-doublets which are frequently used today for mass produced jewelry. These are gemstone combinations consisting of a surface from millimeter-thin opal plates, which have been mounted on onyx, obsidian, artificial black glass, or potch opal. Triplets have been developed from this design, but with the variation of the opal layer receiving an additional cover from mountain crystal, plastic, hard glass or lead glass for protection. 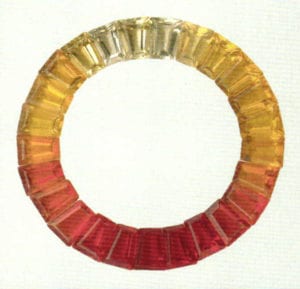 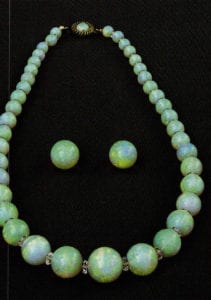 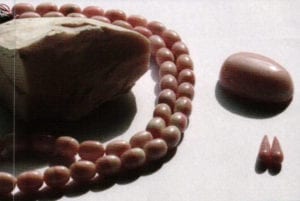 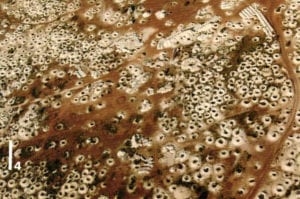 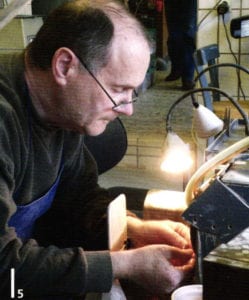 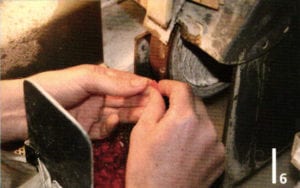 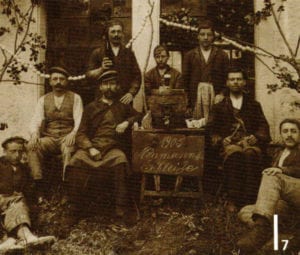 The founder Emil Weis with other cutters, 1905

As a result of the varying water contents (two to six percent), opals can become brittle. Opals have a medium hardness of 5.5 to 6.5 on the Mohs scale. This is why they need a protective setting. If one stores the stones for too long in excessively dry conditions or if one exposes them to severe heat or the sun for longer periods, cracks can form. This is why opal jewelry should be worn as often as possible. The gemstone gathers the moisture it requires from the atmosphere and the skin of the woman wearing it.

All articles by this author
Previous Friedrich Becker: Escape Into the Fourth Dimension
Next Findings, Clasps and Semi-Finished Components
Social media