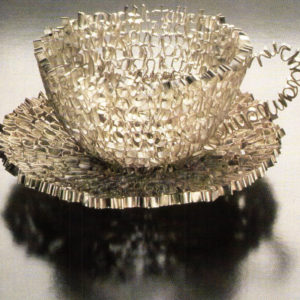 A number of metalsmiths have shown an interest in including text as an integral part of their work. Many of them inscribe their pieces with words and sentences as both a decorative surface enhancement and as a way to direct viewers/wearers toward the objects’ intended meanings. Alyssa Dee Krauss pushes beyond inscription, however, and effaces the line between word as symbol and word as object. Her pendants, rings, and necklaces are literally made from words, lines of writing bend and formed into a beautiful and complex network of often familiar phrases. 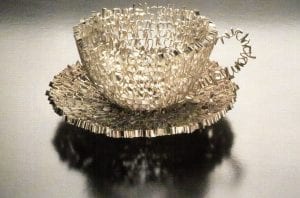 Frequently the passages have their source in popular literature, fairy tales, or common myths, such as the story of Eve’s fall from grace. Often the texts she chooses are charged with overtones of cultural sexism or they may express the fantastic and ultimately unfulfilled wishes and desires of a fairy tale princess waiting for her prince. Sometimes a line is repeatedly stacked onto itself to create a densely layered pendant. At other times, a phrase, bent into the wire or sheet, defines the volume of a cup or bottle. This almost infinite repetition turns both the spoken phrase and its material substance into a nonsense mantra of sound and linear form. And like the passages themselves which are so familiar that they lose the specificity of their meaning through repetition, the vessels which she creates are also unable to contain or hold substance. 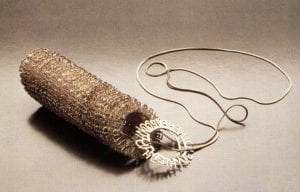 Krauss’s works exhibit a poignant longing, a desire for words to recuperate meaning, for myths to be real. The phrases which create these forms waver between pronouncement and the fading echo of past voices and the objects which she creates from these texts hover between exquisite corporeal beauty and a delicate network of webs which may dissolve with a touch. 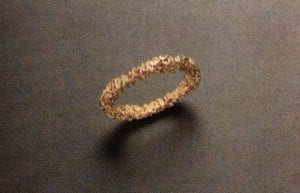 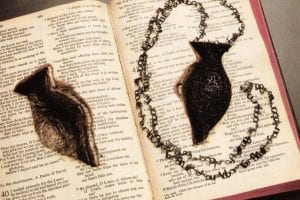 Frank C. Lewis is the editor of Metalsmith.