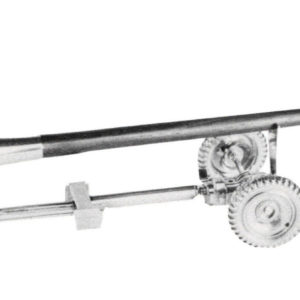 This article features the Objects D’Dart Exhibition held at the Fashion Institute of Technology, New York City organized by Chuck Schwarz on June 7-17, 1984.

The “Objects D’Dart” exhibition or, more fondly, the “Art Dart” show, could be seen as a sharp counterpoint to the “Jewelry: U.S.A.” exhibition at the American Craft Museum. But who wants to get stuck with that serious approach when the “Art Dart” show was so obviously a playful display of the creative spirit. The aim of this review is to throw out an observation or two but certainly to hurl no barbed criticisms.

The “Art Dart” show was first exhibited at the university museum at Southern Illinois University at Carbondale, where it was billed as a “show of darts, personal interpretations and creative deviations.” Subsequently, it was shown at FIT concurrent with the Society of North American Goldsmith’s conference.

Viewing the “Art Dart” show was something like being a kid in a candy store. And by the way it was presented at FIT—all jumbled together in a couple of cases—that impression was heightened.

The best score in the popular vote went to Richard Prillamen’s untitled dart on a chassis with driver/rider. It won the dart trophy which was made and spiked by Richard Mawdsley. Even with this clue it was difficult to settle on a favorite.

The darts ranged in concept and size from Bill Boysen’s 18″ long blown-glass dart to Lee Wurtzburger’s minimal darts made of toothpicks, thread, needles and acetate. There was Bill Rodland’s blunt Opponent’s Dart and an untitled dart from Tayeko Yamada that was festooned with ribbons and little bells. Sali Katz rose to the occasion with Dart Vader which used the appropriate plastic head on the tail of the dart.

There were other darts that piqued one’s interest, some because of their visual quality, others through a play on words, or both. Whatever the reason, the show was viewed with a smile and that’s what it was all about.