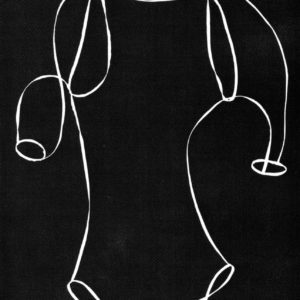 Caroline Broadhead: Jewelry and Beyond

Deborah Norton interviewed Caroline Broadhead regarding her recent retrospective at the Crafts Council in London and her recent change from jewelry to clothing.

Deborah Norton (D): Your recent retrospective at the Crafts Council in London was intriguing, since it seems you are moving from jewelry to clothing. What inspired this change?

Caroline Broadhead (C): It all started with a woven bracelet form. Because the bracelets were made out of nylon wire, I had to decide how wide the bracelet was going to be before I started in order to cut the length of nylon. It was a definitive action that prevented any decision making along the way. One day I decided to start with a great wodge of nylon and make a bracelet that covered the entire arm. I then did a series of arm-pieces in various materials, one of which used gathered fabric, and I found it needed something down the front of the body. Suddenly, having made a garment, I realized I’d discovered a whole new area. So, it was an extension of the armpiece that turned into a garment rather than starting from a garment.

But the clothing doesn’t really have any relationship to jewelry except as the history of the way that I’ve arrived at this point. The only links between the two are that they’re both about what people wear or how people cover themselves. 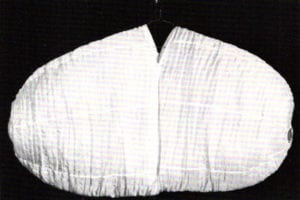 D: Then would you say that you don’t see these garments as body ornament?

C: No, because I don’t see these as being worn. They’re really Fundamental statements about the protective layers – the psychological layers – that people cover themselves with. They’re not about clothes at all.

C: It was done for an exhibition in England in 1986 called “Conceptual Clothing.” I wanted to bring several ideas together to make a major piece. In fact I did a few of the pieces – Long sleeve shirt, Curling arm and Cocoon – before actually calling it “7 ages.” It seemed an interesting idea to have the different stages of a human life seen through garments.

D: And what was the idea behind Fold-up shirt?

C: That was one of the first shirts that I made and it had to do with trying to alter the shape of a garment. Or maybe subconsciously I was playing with redesigning the human body around the clothes. You think, “Oh, God, there’s only one neck,” when you wanted to design something with more than one. Also at that time it was very important that things be wearable. 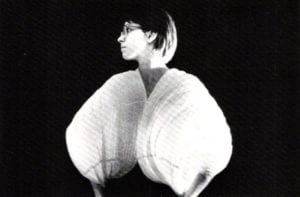 The first of the seven ages, consisting of two sleeves that zip together around the middle, represents birth

C: It seemed self-indulgent to make something that wasn’t wearable because of where I had come from. In 1983, the pieces of jewelry that were the most avant-garde were large structures that weren’t wearable. They were interesting, but they didn’t take into account the fact that a human being breathes and walks through doorways. And soon it became a cliché to design a thing that was not rooted in everyday life. To me, there wouldn’t have been a point in making something like Fold-up shirt unless you could wear it. Once you put the Fold-up shirt on it looks like an ordinary shirt with a big pleat across the front.

D: But some of your things now are unwearable. What made you change your mind?

C: I realized it wasn’t a real constraint, since the pieces that I was making weren’t being worn. They were being hung on a gallery wall. The “Conceptual Clothing” exhibition, where “7 ages” was displayed with fine art work reinforced this idea. I though, Why am I trying to make these nonwearable clothes to be worn? The rest of the exhibition was completely unwearable.

D: Tell me about Seam.

C: I liked the idea of taking away all the fabric in a garment and still being left with something – the process of making it. It’s a ghostlike, skeletal form, yet I like the strength of presence that comes from it.

D: Do you see these garments as sculptures?

C: Somehow sculpture doesn’t recognize the history or progression of this work, which I think is important.

D: Like much figurative sculpture, your work explores the human body, only you’re doing it with clothes.

C: There are similar messages coming through, but in my pieces the figure is absent. My work is about this inanimate skin that everybody wears.

D: In your jewelry colors was very important. Why did you abandon it in your clothes?

C: I think it’s due to the fashion element. I didn’t want the clothes to appear enjoyable or to be taken as garments to be worn. I wanted the emphasis to be on the structure and the concept and also on the quality of the material. I’ve been very careful about selecting the right fabrics even though they’re all white because different fabrics develop different feelings. If there were colors you would just see the colors and not notice whether the fabric was moiré or muslin.

D: Speaking of fashion, recently in Metalsmith (Summer 1990), Garth Clark said that because jewelry has been associated with fashion for so long the art world isn’t willing to take it seriously. I was wondering, when you switched from jewelry to clothing, did you have in mind challenging this idea by making serious art that is even more closely associated with fashion than jewelry?

C: I’m pleased that my work is treading ground that people find uneasy. I do get angry with the concept that jewelry is a Frivolous thing having to do with women and department stores, which the art world doesn’t take seriously.

D: In both your jewelry and clothes you explore the idea of expansion and contraction. Why exactly does this interest you? 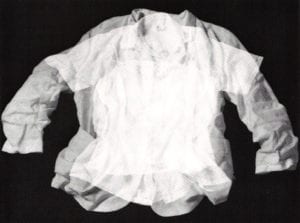 C: It’s the idea of something changing. I like creating an object that’s not purely visual, that people can think about and do things with that I would never have done. It’s wonderful when an object can allow something to happen that I haven’t designed it for.

D: In an interview recently you said, “The difference between how I work today and how I worked in the 70s is that everything gets more condensed.” What did you mean?

C: That has to do with time. In the 70s I was working on my own work full time. Then at the end of the 70s, because I had to earn a living more seriously, I began teaching and I started a line of jewelry called C&N with Nuala Jamison. In the beginning I devoted one or two days a week to my work, but now no time is set aside for my work and it gets down to snatching a few days here and there. So everything gets condensed.

D: I thought you were referring to the fact that your thinking is more condensed.

C: I was, but it’s only because of lack of time. It’s a more nerve-wracking process than the way I worked before. I used to try half a dozen things and then choose two to go ahead with and discard the others or pick them up at a later date. But I can’t do that now because there isn’t time. There’s no meandering anymore, except briefly in my head. I think you can probably do this for a while but not forever. Otherwise your thinking becomes too narrow.

D: I am curious about the photographs that were in your retrospective. What about photography interests you? 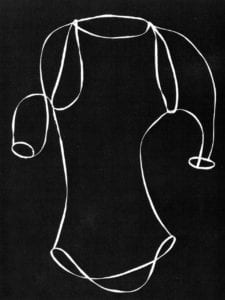 C: It was while doing some photographs for a performance I did with Fran Cottell in 1989 at the Institute for Contemporary Arts in London and at the Painted Bride Center in Philadelphia that I began playing about with it. I saw things in clothes lying on the floor that I wanted to capture and photography was instant and realistic. The photos for the exhibition were taken by Peter Mackertich, who is a professional photographer. He photographed Layers from a great height in his studio using one negative. The result is a wonderful ghostly presence.

D: Do you see your work as progressing along a continuum from one stage to the next?

C: No, I’m constantly going back and forth. I do something and let it hang around while I go back to an older piece. If you juggle the photographs of my work, it appears that I make momentous decisions like dropping ivory and turning to cotton, but, in fact, it probably rook about four years to drop ivory completely after I introduced cotton. The same thing happened when I did the shirts. I still went back to making some jewelry. But, generally, the progression is clear if not steady. I thought the retrospective showed a slow, logical progression from quite decorative objects in the spirit of jewelry that’s meant to be worn to something that’s much more total – a covering of the whole person.

A catalog titled Caroline Broadhead, Jewellery in Studio by John Houston is available from The Crafts Council, 12 Waterloo Place, London SW1 England for £6.50.

Deborah Norton is a contributing editor to Metalsmith living in London.

How do I bring luster back on Lapis Lazuli

Which torch to upgrade to? Centec or Smith Little Torch

Anyone looking to market their Jewelry?