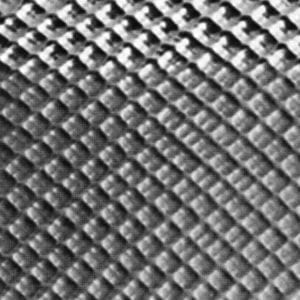 A New Method for Gilding Silver

A New Method for Gilding Silver

A variety of methods for gilding silver surfaces have been used in the past. They have been more or less useful, popular or economical, and more or less simple in technique and skill required for their employment. They include historically old methods such as the application of gold foil, fire gilding with mercury-gold amalgam, and water gilding of gold ions by an electrochemical process of ion exchange, in chemical laboratories, metal-mirror plating of glass by gold or platinum (especially the latter), by painting with organic solutions of metal salts and then faming the surface, is an old established technique. By far the most universal process now employed is electrochemical plating – a technique that has been in active use in industry for one hundred and fifty years.

We wish to describe still another method. The technique employs a colloidal suspension of gold (called a sol) in a volatile organic solvent. The process involves spray application of the sol to the metal surface with deposition of gold particles to form a coherent deposit. The color may vary from light lemon to darker yellow, depending on the thickness of the deposit.

All of the above methods have their particular advantages, even if only for some specialized context. Indeed, burnishing of gold foil onto silver surfaces seems to be experiencing some renewed advocacy and interest. Every method involves the acquisition of some experience and familiarity for its most fruitful employment.

Detail of gilding on a textured silver surface

This is true of even the most universal method, electroplating. Depending on the voltage, solvent strength, colloidal addend, and electric current density not all deposits appear as bright adherent coatings, and experience is a desideratum even here. But a graver difficulty sometimes arises to frustrate utilization of this powerful technique in small studios. Namely, the electrolytic solutions usually contain cyanide ions and there may be a hazard in their storage, utilization and disposal – mitigated somewhat in small scale applications that utilize an electrobrush. As is well known, a grave health risk of mercury poisoning and pollution has long led to the abandonment of fire gilding by other than very specialist establishments.

The technique described here could lend itself to employment by small shops for gilding small areas, whether plane surfaces, certain jewelry, salt cup and small goblet interiors, or the like. No universality akin to the electroplating method is claimed – only that a method is presented that may offer some advantage for some workers in some applications. It is made possible by the development by Klabunde and coworkers of a method for producing stable metal organic sols, i.e., stable colloidal suspensions of minute metal particles in organic solvents such as acetone, ethanol, ether, and others. They have recently described deposition of gold films on a variety of materials including glass and polymers.

In this work, we have used gold-acetone sols that varied in concentration from 0.25% to 0.65% on a weight(g)/volume(cc) basis (w/v). The sols are cabernet colored and are stable for an indefinite period. We describe an application to the gilding of sterling surfaces. Details of a study of several experimental variables are presented and optimum conditions are provided. Although not studied, there is no reason to doubt that the method would succeed with fine silver surfaces, as well as with (crystallographically closely related) copper surfaces; and, quite likely, with brass, bronze and some other metals.

PREPARATION OF SURFACE. The surface should be free of tarnish, oxide, etc. We have used freshly buffed surfaces, both plane and figured. Not unlike the requirements for successful gilding by plating, burnishing, etc., the prepared surface must be clean and not handled manually. Methods of cleaning are not extreme. In our work, they have included detergent wash, reverse anodic electrolysis with a dilute sulfuric acid or sodium bisulhte (pickle) electrolysis solution, followed by de-ionized water washes, and steam cleaning. We found a simple mild soap wash followed by steam cleaning to be satisfactory.

AIR JET SPRAY. The sol was applied with use of an inexpensive atomizer gun (Air Brush kit #6131 from Central Pneumatic, Camarillo, CA 93011). The spray must be adjusted to give a fine mist and not propel droplets. Individual droplets should not be seen on the sprayed surface but rather a uniform dark matte gold deposit should build up with continued spraying. Ten cc of solution suffices to give an adequate deposit on a surface area of 20 – 30 cm2.

TEMPERATURE. The temperature of the sprayed surface should be 130 – 160 C. We used both a hot plate and a hot air gun. Various devices may be used to assess temperature. A thermocouple, preferably, or a thermometer may be used; the latter instrument gives only a relative qualitative idea and not an accurate measure of surface temperature. The optimum temperature varies with the strength of the air spray jet which causes cooling. A temperature crayon can provide a useful and simple measuring device. But trial and error, with a modest amount of experience for a particular set-up, can also suffice. On the (too) low temperature side, the spray will tend to cause liquid pooling and the deposit will have a dark bluish coloration, with a yellowish tinge. On the (too) high temperature side, initiation of deposition and nucleation on the surface becomes more difficult. At the optimum temperature (around 150 C), a dark, matte, deep deposit is easily “written down” by the air gun with, on the low temperature side, an evanescent bluish coloration being evident.

Users will acquire experience for their own setup. We find that a lower concentration sol (0 – 25% w/v) is as satisfactory as more concentrated suspensions and, of course, intrinsically more economical.

FIXING THE GOLD FILM. The gold deposit should be fixed on the surface by raising the temperature. Solvent acetone that is incorporated in the film is largely driven off and the deposit, a dark yellowish matte color, lightens a little in color. No touching or handling of the deposit may occur prior to this stage, and should be avoided prior to buffing (below). Excessive heating at higher temperatures (above 3201 C) is precluded; it results in diffusion of the gold into the body of the silver with graying of the surface film.

BUFFING. As is sometimes required in electrolytic gilding, a gold mirror is developed by light buffing of the film with a clean wax-base rouge wheel to give a stable adherent film. Of course, too heavy buffing will thin the film.

VENTILATION. The solvent employed here, acetone, is widely used, e.g., in the home as a nail polish remover. The spraying should be done under conditions of good ventilation, open windows, absence of fames, etc., to minimize inhalation, and eliminate fire danger.

ADDITIONAL COATING. Even if the first film is imperfect, significant improvement and darkening of the deposit to a richer coloration can be obtained by repeating the procedure – cleaning, spraying and fixing – a second or more times.

The phenomenon that occurs in the fixing process is chemical bonding between atoms of silver and atoms of gold at the surface, by interdiffusion that tends to bind the two layers. Also, acetone molecules that are trapped in the deposit are largely driven off from the film.

AII techniques require practice and experience for the achievement of optimum satisfaction. The same is true here. We believe that the method may offer some advantage in some cases. But we confess that, from our point of view, the aspect of the work related to simple curiosity and intellectual challenge has been a more important stimulus than the ultimate practical potential of the method. At the least, however, we think it desirable that craftspersons should know that such a technique has been explored. We believe it unlikely that the electroplating industry is threatened.

We thank Professor John Marshall for his interest.

B. Seymour Rabinovitch and Roger H. Horner
Department of Chemistry and School of Art
University of Washington, Seattle, WA 98195