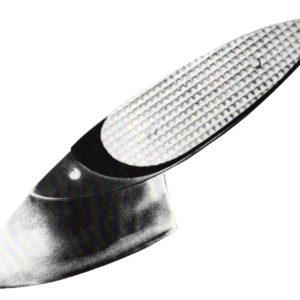 The Cutting Edge of Blade Design

To Bryant Clark design is foremost, and the designs for his hand-crafted knives are created from his knowledge of history and tradition and from his observation and enjoyment of nature.

His involvement with historical projects is impressive and indicates the functional tendency of his art. While he was building his knifemaking business, Clark helped restore his family’s circa 1750 house, which is on the National Register of Historic Places. He is currently restoring his own home of the same age and preparing his studio in a 1913 trolley car which had been used as a home since 1937. To round out his involvement in the American past, Clark once ran an antique shop where he repaired and restored antiques.

Although he could not find a degree program in knifemaking, Clark combined an education in sculpture and metalsmithing for knifemaking purposes. He received a BFA with Honors, majoring in sculpture, from the University of Delaware in 1977, spending equal amounts of time in photography, sculpture and jewelry. He then went on to achieve an MFA with Honors in 1980, in metalsmithing, from Tyler School of Art, while teaching metalsmithing and jewelry making at the Delaware Art Museum. As a student, he concentrated on knifemaking, at first sneaking back and forth between departments, since his professors preferred him to make either jewelry or sculpture. 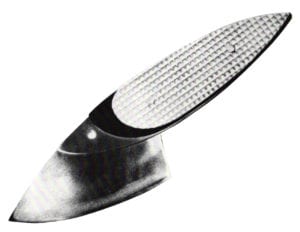 A full-time knifemaker since 1980, Clark has shown his work in a number of galleries and juried craft shows. In the past year, he has won the Craftsman Award—voted by his peers—at the Lincoln Center Craft Show in New York City, a Third Place in the Washington, D.C. Craft Show and First Place and Best in Show Award from the Rehoboth (Delaware) Art League’s Craft Show.

Although he still makes custom jewelry, Clark concentrates on knifemaking, since, in his words, “This form allows me a virtually endless series of design and function combinations as well as an opportunity to work on an intimate scale. I use the materials and construction techniques I enjoyed in both sculpture and jewelry.” Knives combine the senses of sight and touch in a single entity to a degree that jewelry and sculpture cannot, according to Clark. There is a closeness you can achieve with a knife since, unlike sculpture, it is small enough to handle, yet not as small as jewelry. Clark’s knives have a feel, a balance, a tactile quality that can induce a sense of pleasure while they are being used.

Clark is satisfied that, because of his emphasis on design, his knives are artistic as well as functional. Nevertheless, he realizes that not everyone reacts to his knives as art. “When two people come by a show of mine, one sees sculpture and shape, the other sees knives.” He feels if his knives were larger, people would know they were sculpture. Yet, Clark believes, “You have to be a good artist to make crafts. Take early American furniture—whether the furniture maker intended a chair to be art or not, it is nevertheless.” 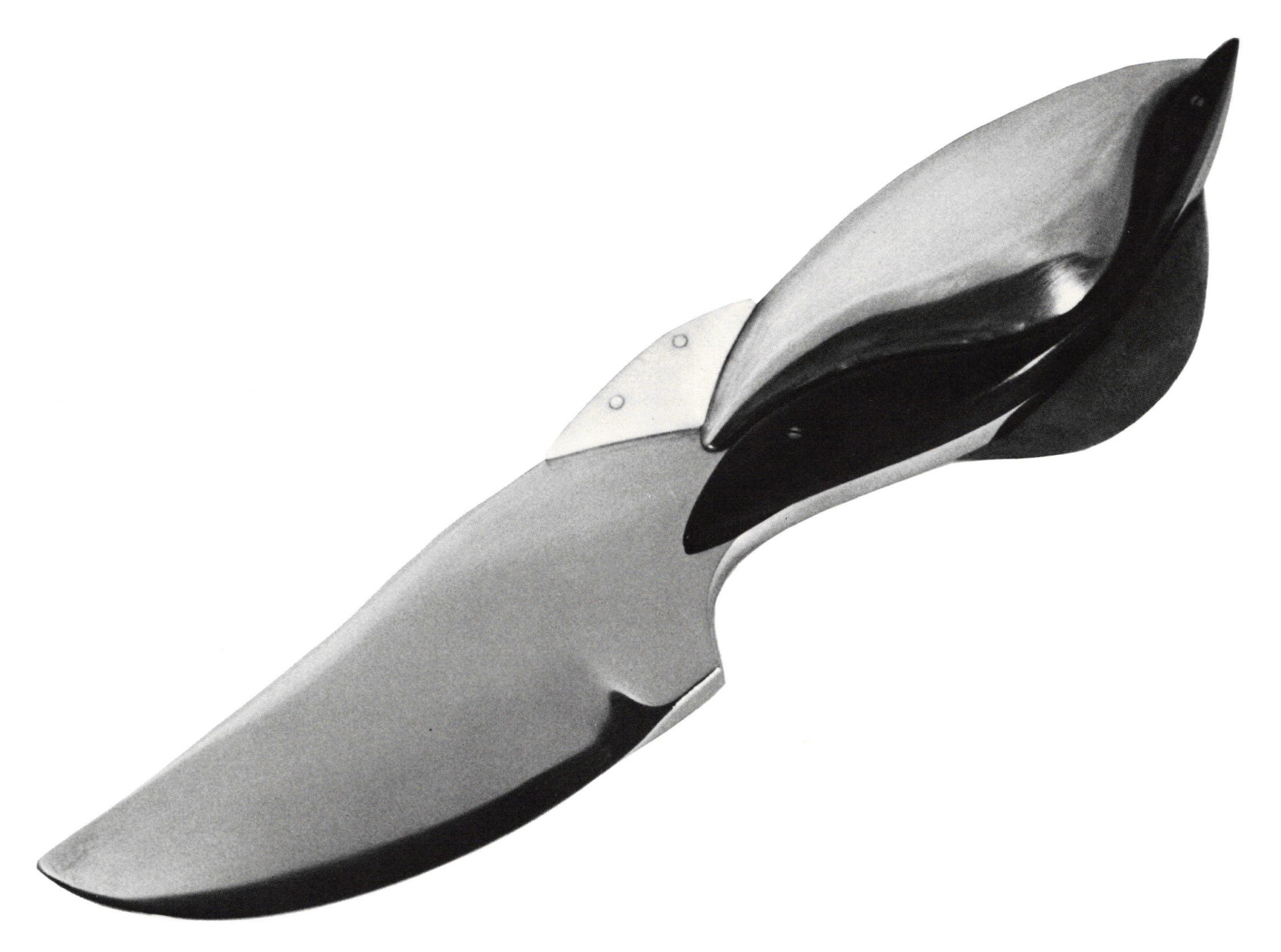 This is an apt example for Clark, since his work has been strongly influenced by the simplicity of early American designs and American primitive art. He creates his own sculptural designs out of the forms of nature—ocean waves and shell shapes, fish, sand dunes and snow drifts—simplified to their basic S-curves to produce smooth, flowing shapes. As Clark says, “Sophisticated people can still respond to simple shapes . . . because they can take them in in one look. There is a simple pleasure in basic shapes.”

This is evident in Clark’s work. His Deco Knife is more a small sculptural design than a functional knife. Although it can be used as a matt or razor knife, similar ones have been bought primarily for display. Like ocean waves, the raised layers of materials form a continuous curve in the handle and blade that leads the eye to the gentle curve of the cutting edge. There is no straight line anywhere on this knife. A combination of colors emphasizes the layering effect, consisting of textured, silvery aluminum acrylic and brass, which contrasts with the silver gray of the carbon steel blade. The layered construction creates a multicolored sandwich effect when viewed from the side.

The curves of the Deco Knife become more exaggerated and complex in a subsequent series of knives where the exposed blade is incorporated into the handle, a design unique to Clark. In Knife I, the colors, textures and shapes are accentuated by the precious materials. The dominant piece on top—like a sparkling sand dune—is made of polished sterling silver, shaped by a Masonite dieform. On the side, ebony creates a shadow effect beneath the sterling, while the material softest to the touch, gray suede, contrasts its rough surface to the smooth, hard silver and ebony. The raised ivory triangle atop the blade highlights the connection of handle and blade. The blade glides into the handle without benefit of a guard, the impeccably smooth 440 stainless steel of the blade and the sterling virtually extensions of one another. 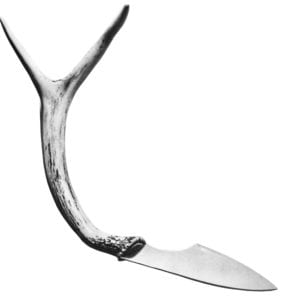 Knife II shows a progression towards simplification and boldness. Allowing the blade to be gripped as part of the handle creates a tactile interplay of the dangerous cutting edge with the comfort of the thicker, blunt steel in the handle. The complexity and textures in Knife I have been distilled to wood and metal, a rich cordia with brass rivets, and aluminum almost the same color as the steel blade. The gentle, elegant curves of the steel, echoed in the cordia, are reminiscent of the natural curves produced by the wind blowing over ocean and sand. The thickness and roundness of the wood offer comfort as well as a sense of protection from the sharp blade. As to function, the dropped edge of the blade as it becomes the handle offers as much protection as a traditional blade guard, while the built-in protective curve is compatible with the lines of the knife as a whole.

Except for the occasional hunting knife, Clark’s knives do not fit the image of knives as weapons. Once, earlier in his career, he experimented with a sharply pointed blade, blued dark from firing, but decided he did not want to produce threatening knives.

A favorite among customers, Clark’s deer antler Letter Openers with brass blade and rivets are often used as desktop worry stones. “The antler is so very beautiful by itself,” Clark comments, “that I choose to make my blade as simple and direct as possible, to become an extension of the antler and not compete or conflict with it.” This Letter Opener combines the warm brass with the white-and-brown-spotted antler. Another pleasing touch is the echoing of the natural curves of the antler in the lower inset curve of the blade. Antler is found in the woods, where the local white-tailed deer shed them every year; the natural grain is produced on the side of the antler that lies on the ground, which erodes the protein. This Letter Opener is constructed to lie on its side, or, for a soaring effect, it can be supported on the two ends of the antler and the tip of the blade. 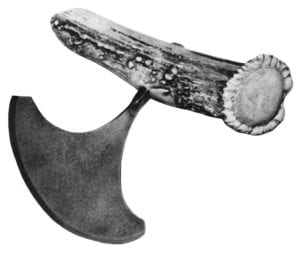 The traditional Eskimo ulu, used for chopping as well as eating food, inspired the blade of Food Chopper I. This blade shape is nearly universal, having been found in almost every early culture, perhaps in imitation of even earlier stonecutters. Whereas the ulu has a shorter neck, with the handle parallel to the blade, Clark’s handle is at a 90 degree angle to the blade, and the neck is elegantly slender. The antler handle is highly polished to resemble ivory. In contrast to the ulu’s textured blade, the edge of Clark’s Chopper is clearly delineated by its extreme polish.

In his ulu-type knives, among others, Clark follows historical precedent by reusing good steel from older saws or files, often leaving the manufacturer’s name on the blade to show its origin. Recycling a good blade is considered a mark of appreciation for the original toolmaker. The blade’s texture will not alter with time since Clark cleans off the rust, reblues the blade to fill the rust pits and polishes it smooth.

Food Chopper II utilizes the ulu curve of the blade in a high-tech design unique to Clark. The blade is cut from an old saw, textured and blued. A matt-finished white acrylic shape is echoed in reddish bronze with a textured shine, while golden brass rivets produce a subtle color contrast to the bronze, accentuating the workmanship. Clark often uses soft pastel acrylic to emphasize the novelty of the design of similar knives. The fluid, graceful curves produce a leaflike or fish-fin effect. In use this chopper calls attention to its nontraditional qualities. If one assumes a blade usually points forward, then this knife is held backwards to obtain the proper rocking or chopping motion. 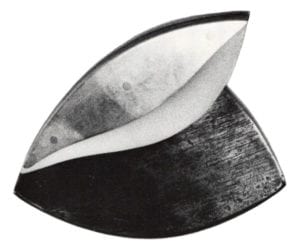 Bryant Clark willingly designs his knives with a variety of materials to provide color and texture. Yet, to fully appreciate the appeal of these knives, one must hold them; the heft in the hand, the comfort of the curved surfaces that encourage exploration delight in a tactile way. The deceptive simplicity of these small sculptures continues to surprise and challenge the senses.