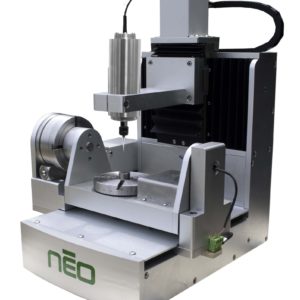 There was a time in Ocean Rose’s life when moving to CAD/CAM would have been like “going over to the dark side,” as she put it. An independent designer based in Tucson, Arizona, she eventually succumbed and invested in ArtCAM jewelry software, as well as a Model Master four-axis CNC mill. 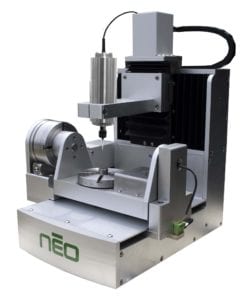 Helping jewelers to avoid misalignment
and save time and money

“It made a huge difference; I could now create pieces in a couple of days that would have taken much longer by hand,” she says. But one thing still frustrated her. Like all four-axis mills, the Model Master machine could cut away only two sides of a wax block without re-positioning: A four-prong ring might look great in profile, but a hub of wax would still be connecting the prongs. To achieve the top-down cutting needed to free those prongs (and achieve needed detail), the designer would have to move the piece by hand and, using fixtures, re-align it for further milling. And she’d have to do so without error: The cutting tools would need to be perfectly centered over the wax, or the model would be ruined.

Enter the Neo Five Axis mill. Introduced by Artisan CNC at the JCK Las Vegas show in June, the mill incorporates a swinging table that allows not only the normal front-to-back and left-to-right cutting, but also top-down (rotary) milling to take place-without repositioning. For Ocean Rose, who began using the Neo Five Axis shortly after its introduction, the change has greatly increased her productivity: She credits its no-touch, no fuss approach with “saving an enormous amount of time—at least 40 hours a month, and that’s not counting the time it takes to re-do a piece after you’ve milled it and found out it’s wrong. My failure rate has practically disappeared.”

Artisan CNC was founded by two jewelers, Randy Hays and Michael Buckley. When devising the Neo, they knew they wanted a system that would be affordable and “usable by typical jewelers who may have never worked with CAD/CAM software before in their lives,” as Hays puts it. They also wanted it to perform five-axis milling, eliminating the need to use fixtures and re-align the tooling when adding detail or cutting down.

To help them, they hired as a technical consultant Mike Adams, a founder of Model Master who had spearheaded that company’s research and development. With Adams’s guidance, the team chose to build the system with one-piece side rails, so that the unit would have the strength and stability needed to cut metal as well as wax. They also added a second rotary table to achieve the mobility needed for five-axis milling. The table, which has a chuck at its center for the wax or metal block, swings up to provide access for x (front to back) and y (left to right) cutting, then swings back down for radial/top-down cutting.

Yet the design of the milling unit got them only partway to their goal. The ease of use and overall success of the five axes would rely heavily on the design of the toolpath generation software. While the ArtCAM software included a toolpath generator that could be adapted for sequential five-axis milling, other software packages did not. So they turned to Don Wiesmann, developer of ProtoWizard software, to develop a Neo-specific system. The Neo ProtoWizard enables users to build multiple milling paths for a part in either the “flip” position (i.e., on its side) or the rotary position (standing straight up), then stitch them together to produce, as Wiesmann dubs it, “lights out, press to go, come back when the machine stops running” operation.

Artisan CNC is selling its milling unit for either $22,000 or $25,000, depending on whether a buyer opts for the larger mill size (196 cubic inches of work area versus 288 cubic inches), and the Neo ProtoWizard is included at no additional charge. “With the price range we’re in, we’re not making an aerospace-quality machine or a precision watch system, where just one lead screw can cost $15,000.” What Artisan CNC is making is a system that can meet the needs of jewelers, and maybe a little more. Which leads to a final issue: What the Neo offers, and what it doesn’t-at least not yet.

Five-axis milling can take one of two forms: “simultaneous” machining and “sequential” milling (also known as “indexing”). The Neo performs sequential five-axis milling: It rotates a piece to specific positions and makes a series of sequential cuts. It does not do simultaneous machining, in which all of the rotaries are working at the same time to cut out areas of the wax/metal—think of a typical gardener cutting away at a hedge, and now think of Edward Scissorhands.

As Hays notes, simultaneous machining is “more complex and expensive, and takes longer to program” than sequential milling. While the Neo unit could actually handle simultaneous milling instructions, that balance between cost and capabilities hasn’t quite tipped in favor of creating the necessary software—yet. When asked if ProtoWizard will one day be able to accommodate simultaneous toolpaths, Wiesmann’s answer is yes, but when that development occurs will depend on the success of the Neo Five Axis. If the unit is a hit and builds a sufficiently sized user base, simultaneous machining won’t be far behind.

Note: This is an abridged version of the article that appears in the December 2010 MJSA Journal. To learn more about the complexities of designing the unit, you can order a copy of the full article on MJSA Online at mjsa.org, or subscribe to MJSA Journal.

All articles by this author
Previous Jewelers Saws Tested: A Hands-On Review Of The Knew Concepts Precision Lineup
Next Tips and Tricks for Scoring Metal
Social media