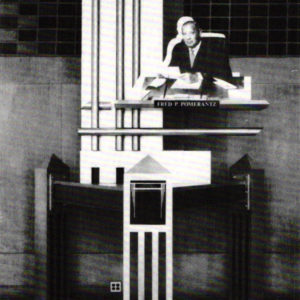 Monumentality On Scale and Sculpture

As a moviegoer in the 1950s and 60s. I watched intently as insects and crustaceans were transformed into gargantuan monsters by manaical scientists bent on the destruction of our planet. As giant spiders and flies toppled telephone poles and overturned cars, while witnesses screamed in horror, I was nonetheless fascinated and entertained. I marveled at their play on my imagination through their transformation in scale.

Today, when my students ask which scale would best suit a particular work, I usually answer with aquestions like: How do you want the piece to be viewed? What impact will the piece have? Consequently, I continually ask myself what is it that fascinates me in working at a particular scale. While I often hear craftsmen claim that their work with their chosen material because it is in their blood. I wonder if this is also true for scale. Is the scale in which we work a psychic or physiological requirement of our medium?

This is not to say that we have a metalsmithing community working in entirely the same scale. We can, however, make certain observations about this discipline that tie us together in our response to scale. Metalsmithing studios contain similar tools and equipment, and, as students, we pursued similar technical processes. This is part of our educational process, and it often yields predictable results. Then, there are the restrictions—not only the financial limitations of materials, but also the limitations of the space in which we work. By in large, however, I would have to say that we work in a certain scale because it feels “comfortable” to us.

Scale can, and probably should, be a response to subject matter, image, concept, form, function and site or display. Scale is a response to something familiar by comparison. It is the size of work as compared to some constant or standard. Something seems to happen to the very nature of the piece when the scale is changed that challenges our normal apprehension. This is accomplished by the artist in an intuitive manner on the gut level and is an important part of the relationship between artist and public. It is a component of the artist’s visual language, as important as decisions regarding form, color and image.

Considering the fact that craftsmen are often preoccupied with their material, it is interesting to observe that sometimes an increase in scale maybe accompanied by a switch to a new material. I am not certain what factors enter into this decision. It could be that the new material has opened the door to larger works in an inspirational sense, or perhaps larger-scale works were restricted technically by the other material. But we can conclude that pieces made of certain materials do not work well (visually) on a number of scales. The decision of scale is thus a very important part of the creative process, as well as the viewer’s response to the work as it relates to its visual environment.

For example, works that approximate six feet in height evoke an automatic association with the human figure. At this scale we may make reference to what we know as “life size.” Works that approach 12′, 15′ or larger, become “monumental,” regardless of whether the subject is a clothespin or a memorial to George Washington. Jewelry-scale works require a more “intimate” viewing environment. Working at a large scale offers an opportunity to play a more significant role in architecture or landscape. Conversely, working in “miniature” plays a paradoxical role with established visual associations.

At a recent exhibition at Marywood College, architectural designs were represented by models in cardboard, plaster and balsa wood. I have always been interested in how “models” bring the viewer to imagine the work on a totally different scale. They ask the viewer to participate in a fantasy. As I walked through the “Art in Architecture” show, I was drawn to memories of my earlier days of model railroading. What I was experiencing was a feeling of having the ability to be in control of that environment. Creating that community on the train platform with all its small buildings, trees and people, was a very pleasant experience. The train, as it went around the track, traveled to foreign places in my imagination. 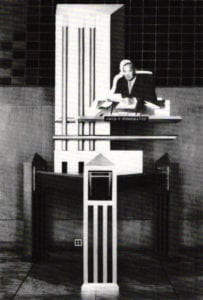 For me, as an artist whose training and background was “objectmaking” and a “craft”- oriented response to form and concept, the switch to large scale was a somewhat logical transition. My work took on a new role, however, as I considered it functioning in largescale environments.

I wanted to create a larger format for my work, but, more importantly, I wanted to create a sense of “monumental presence” through scale. This was the primary concern in my design of the Fred P. Pomerantz Memorial. Scale played an important role in projecting the image of this man in relation to those who knew him and to the impact he had on the garment industry. The size of work (13′ high) also provided an opportunity to respond to a particular architectural environment.

Despite this foray into larger scale, vessels still hold it certain fascination, for they, too, can retain a certain monumental presence, in addition to being ceremonial. My vessels of 1984-85, and jewelry pieces as early as 1979, have a distinct relationship to my current sculpture because of my overriding concern for monumentality. I somehow feel that although the sculpture does not have the utility of the vessels or the jewelry, they share “monumental” concerns in a metaphorical sense.

The attraction for making sculpture, or any art, for that matter, for me is the imaginative correspondence that exists between the artist and the rest of the world. The desire to communicate our “vision” is what drives us as artists. Metalsmiths have chosen a certain discipline that best suits this vision. It matters little whether the outcome of this is in the scale of jewelry, holloware or sculpture. It is important, however, that these tangible results are as much a look inward as they are an outward expression.

Robert Griffith is assistant professor at Marywood College in Scranton, PA and a practicing artist.