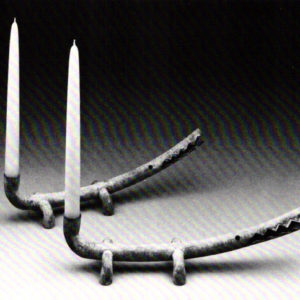 This article is one of a series of articles from Metalsmith Magazine “Art and Technics” talking about techniques in craftsmanship and design.  For this 1990 Summer issue, Tim McCreight talks about the materials that can be found from other fields.

I suppose cooks get goosebumps when they walk through a farmers’ market. Maybe bankers get clammy palms when they hear the thump of the presses at the national mint. I know for a fact that metalsmiths get glassy-eyed when they stroll the aisles of a well-stocked hardware store or used tool company. Admit it, you know the look. The rapid breathing, the twitch in the eye. The effect is especially rich when several smiths go into a store together. They shout out loud as they call each other over to see what they’ve found, and all the while they furtively clutch their private treasures out of the sight of their friends.

A good deal of the enthusiasm of metalworking today – and no small number of the exciting pieces as well – comes from the ability to import materials and techniques from other fields. There is a special kind if vision that can see vessels and findings among plumbing fixtures. And there is a wonderful directness that comes from a technical solution found in an unexpected quarter. 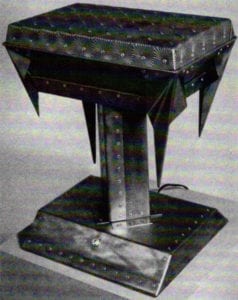 Examples of this kind of cross-pollination are so numerous that it is difficult to isolate a few. One example that comes to mind is the series of creature-shaped candlestick holders made of copper tubing by Jonathan Bonner. The whimsical personality of these gators with their crusty skins of green patina has something to do with their familiarity. You don’t have to be a plumber to recognize the pipes that made up the animal, and yet the familiarity far from making the work appear common, serves to underscore the transformation that has taken place. These pieces are not merely clever uses of materials (like owls made by gluing seashells together) but legitimate art objects. What makes these pieces so enjoyable is the delicate precision of scale, craftsmanship and function. You know, design. Technique in this case has been reduced to invisibility. Though the bending, sawing and soldering are in fact quite demanding, the illusion of easy construction allows the viewer to approach the work with a comfortable immediacy.

Another example of work that capitalizes on an industrial method of joinery is Dale Wedig’s lamp. Here pop rivers are used for both structural and design reasons. The shade is made of a commercial baking pan and the body is of zinc-coated steel plate. The form was developed in paper and then cut out with tin snips and bent on a brake. Someone without a bending brake could get by with another of those common hardware store items, a C clamp. By clamping strips of wood or steel together on both the inside and outside of a form, it’s possible to make a crisp bend. 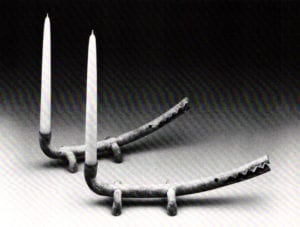 The pop riveter does for the metal trades what the stapler does for the office. It consists of a gun-shaped tool that costs about $20. The “staples” in this case are hollow rivets, generally of aluminum or copper, that have been pre-formed with a head on one end and a finishing nail slid tightly into the core of the tube. The tool grabs onto this nail and pops it through the rivet, thereby flaring out the end.

Because the pop riveter makes a tube rivet, there is a passage through the middle. This opens several possibilities, such as threading on a decorative element, inlaying a wire of contrasting color or nonmetal material, or, perhaps, allowing light to show through. As formed, the pop rivet has a drab shape that is sometimes appropriate, but I can imagine cases where it could be embellished through stamping or engraving.

The 20th century has established that art has little to do with the inherent value of a material. We can acknowledge that the intent and vision of the artist are what give worth to a piece of art. Most everyone will admit that any material can serve as a vehicle for this vision. If course, it would be misguided to limit ourselves to common materials, just as it would be confining to permit only precious ones. The point, I think, is to seek a larger awareness. Such freedom from prejudice, concerning both materials and techniques, will open our eyes to the possibilities that surround us.

Tim McCreight is head of the metals department at Portland School of Art and a contributing editor to Metalsmith.

All articles by this author
Previous Metalsmith ’90 Spring: Exhibition Reviews
Next An Interview with Garth Clark
Social media