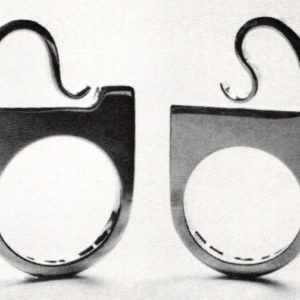 The Metallum Gallery and Showroom

by B. Malin Gunnarsson

It all started in the summer of 1981 with the offer of an empty shop in Stockholm’s Hornsgatan section known as “Pukeln” (the Hump). In the immediate vicinity there were three other cooperatives: The Textile Group; a ceramics group called Kao-Lin; and a woodworking group called Lignum. Rumor also had it that another ceramics group Blås & Knåda (Blow and Knead) was even planning on moving to the area. The time seemed right for a metal cooperative to open as well.

After a mass of telephone calls and a huge amount of correspondence throughout the summer, by the time autumn arrived we were 27 in number. The shop, in a beautiful and newly renovated 18th-century building, needed some work and alteration in order for it to function as both a gallery and showroom for the group. Display cases, lighting and office equipment had to be installed and, in order for our insurance premium to be at an affordable level, a secure safe, alarm system and armored glass were also necessary.

Interior view of the Metallum Gallery

We organized ourselves for “work days” when we did most of the necessary carpentry and painting. We investigated alternatives for our poster and exhibition invitations design and printing. Our logo was designed by Josephine Davidson and the shop’s iron sign of the logo was made by Sven-Olof Sundberg. During the work days we got to know one another, formed our first board and registered the company.

On October 10, 1981 we had the opening of our first exhibition, a huge joint venture which showed the group’s breadth and depth. We had many, many visitors, thanks on the one hand to an illustrated article in Dagens Nyheter (Sweden’s biggest national daily newspaper) and on the other to the members’ hard work putting up posters and sending out invitations. 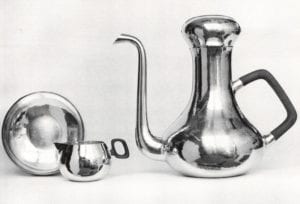 Since then we have alternated with individual and joint exhibitions, with themes such as “egg cups,” “jewelry” and most recently “hollow- and flatware.” One reason for this last exhibition was that three members of the group Lena Björkman, Hubert Hydman and Joy Ljungquist had just completed their final year at art school and had produced their examination pieces in holloware.

The group has also exhibited at Stora Kopparberg’s Museum in Falun, at the Rhöss Craftsmuseum in Gothenburg and at Delacarlia. In 1983 we held seven exhibits in all, including a group exhibit at Christmas, and in January of 1984 we showed the work of Ragnar Myrsmeden, a 95-year-old blacksmith, who made his first creation in 1903. We have also invited guests from abroad to show in our gallery, such as Eila Minkinen, a jeweler from Finland.

Our gallery is set up so that the first room is for exhibitions. The inner room is for permanent merchandise. We organized it this way from the beginning because we were afraid that during an exhibition of one person’s work, other members could not sell. So we decided to provide the customer with a complete choice all the time. 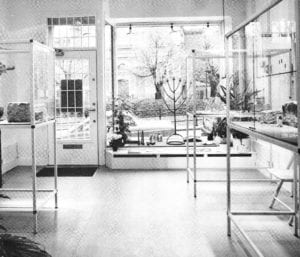 Interior view of the Metallum gallery

The Metallum group has a very wide range of work, with the only common denominator being “metal,” hence the name. We work in all phases of metalsmithing: jewelry, holloware, relief work and sculpture in varying materials and techniques. There is gold, silver, copper, brass, wrought iron, stainless steel, nickel silver, aluminum and titanium, and among the techniques used are: gem setting, stretching, raising, iron forging, weaving, etching, repousé, engraving, granulation, enameling and niello. All of us are craftsmen who don’t use any industrial machines, only smaller tools, such as a dentist’s drill or polishing machine. If we can’t manage the work ourselves, we go to the industry for example, for silver plating or anodizing. 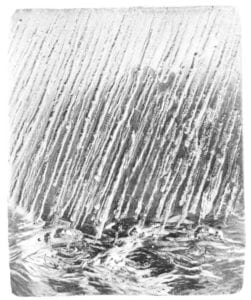 Commitment to the group is as follows: Each member pays 4000 Swedish Crowns to join Metallum. This money is nonrefundable. (At first we charged about 1500 Crowns per person, but things were much more expensive than we could imagine, especially the security so we had to take out a bank loan as well as buy a big safe on credit.) If a member wants to leave the group, the best time to do this is at our annual meeting in the spring. The gallery is run by the members, each putting in two weeks per year. We have found that our customers like the personal contact they get with someone who knows the craft and who can answer questions and explain how items were made. This seems to outweigh, so far, any lack of business experience any of us might have. The gallery takes 25% commission on sales, and the shop rental is paid quarterly by the members. 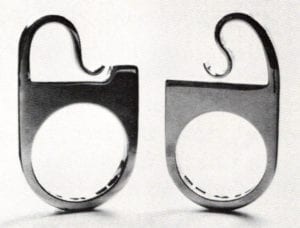 Beyond direct sales, various groups are in charge of such things as window display, exhibitions, customer register, bookkeeping and public relations. One result of the publicity group’s work was Metallum’s participation in the radio program “The Artists Speak.” A version of our poster, in English, was also produced and distributed to hotels, museums and restaurants. Obviously, publicity is also each member’s responsibility. We consider that cooperation with other similar groups in the area is most important. For example, we advertise every weekend, except for summer, in three newspapers in Stockholm with other groups and galleries of the Hump. And we have also put together a brochure as a guide to our area. 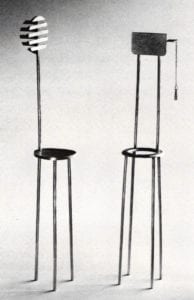 A craft-works jury keeps an eye on the technical quality of the work on sale, while the artistic aspect is each member’s own responsibility. Most of the items sold by the gallery are unique, rather than on order. However, if a customer wishes to commission a piece, he can refer to a members’ register, which gives all relevant information on every member’s work, both visually and in text. 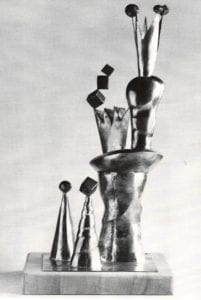 The ages of the members run between just over 20 to a little over 40. Some have had studios and workshops for many years, some are straight out of school. Several of the group share workshops with one another — a way of reducing the costs, avoiding some of the isolation that is so often a part of work of this kind and a means of sharing tools. For example, the stakes needed when shaping a pitcher or vase of a complicated form are varied and expensive. It seems that it is practically impossible for a metalsmith, as is the case with many creative occupations, to eke out a living in his own studio. Many of us take extra jobs, working as shop assistants, waitresses, teachers, hospital orderlies, home helps or just working for older established craftsmen in their studios. 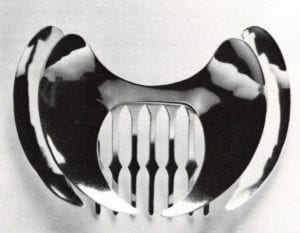 Some members market their work only through Metallum. Others are members of other associations too, such as the Craftsmen or The Association of Contemporary Swedish Silver. Others sell from their own workshops or through galleries in other towns.

Our first years have been both stimulating and difficult. Difficult because it does take time to build up a clientele and to find a workable routine for all to follow. Another initial difficulty has been reaching as many people as possible, considering the limited funds available. At the same time it has been a challenge to overcome these obstacles together and not lose momentum. Then everything happens at the same time — a fine exhibition which gets both recognition and financial results, participation in a radio program, press coverage, and suddenly things are rolling. 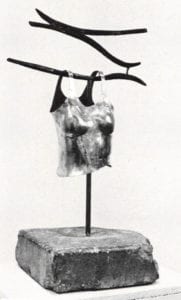 It has been stimulating and rewarding to work together in a group, to share responsibility, to share the fruits of success. We have gained a great deal by getting to know each other rather than sitting in splendid isolation in our own studios. One is carried along by mutual development, one is as happy about others’ successes as one is about one’s own and that is probably the best foundation upon which the future can be built.

By B. Malin Gunnarsson
Metalsmith Magazine – 1985 Winter
In association with SNAG‘s