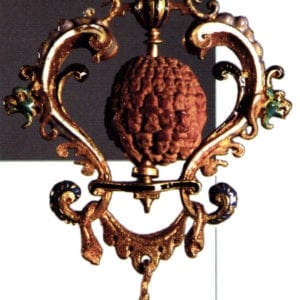 Marvelous Jewelry From the Green Vault

The Green Vault is Europe’s most magnificent treasure trove. It holds masterpieces of jewelry and goldsmith art as well as precious pieces made of amber and ivory, gemstone goblets and artistic statues made of bronze. This famous collection returned to its original location, the City Residence, at the start of September 2004. This is also where it was originally founded in 1723 by the Saxon Electoral Prince and King of Poland, August the Strong (1670-1733). 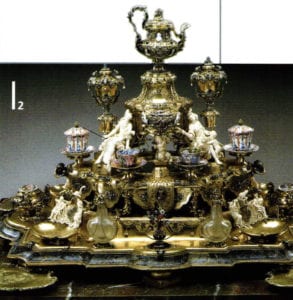 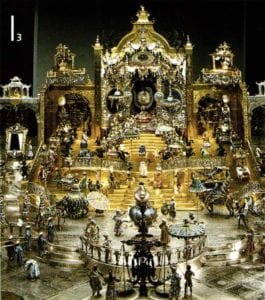 Although the exhibits from the Green Vault have always been breathtaking and almost dreamlike for experts and laymen alike, their true uniqueness has never been manifest to the same, intense degree as we find in the new exhibition space. Almost 200 multiply coated glass showcases, illuminated by a vast array of variable, ceiling-mounted spotlights, allow the objects to appear as if they were suspended in the air. The entire architecture of the exhibition space, stripped of the Baroque accoutrements of the former chamber of marvels, ensures that the individual artworks find a perfect setting and are not swamped by this agglomeration of perfection.

Restorers and academics have ensured that the masterpieces, for example the goblets designed by Abraham Jamnitzer, decorated with coral and in the form of the Dauphin, the Court State of the Grand Mogul by Johann Melchior Dinglinger or the golden coffee set, find a perfect setting. We reach an entirely new appreciation of the frigate fashioned of ivory by Jakob Zeller in 1620 with its wafer-thin sails and flags and ivory sailors climbing in the rigging made of fine gold threads. The ship can now be marveled at from all sides. Even an experienced museum man like Dirk Syndram, director of the treasure trove since 1993, cannot keep his enthusiasm in check. “Previously it was just this oddity. Now we can see the true art in this work.” 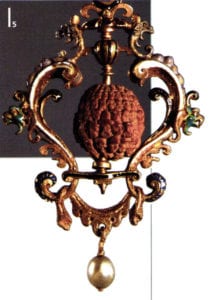 Another fantastic artwork is also presented in a previously unseen manner. A magnifying glass in the glass panel of the showcase allows us to recognize the “186 countenances” engraved by a master’s hand on a cherry stone during the Renaissance era. 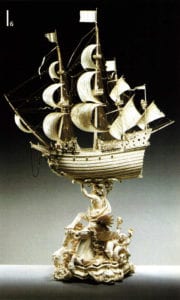 The imaginative pearl figures and the magic, extravagant dishes by the genius goldsmith Dinglinger join with other artworks of such significance that they form a globally unique exhibition. This journey patently describes how aesthetic beauty was previously celebrated at the royal court, sweetening the passage of time. Dinglinger, the court jeweler, worked with two brothers, two sons and fourteen apprentices in order to complete the numerous orders from the Wettin royal family; they also created the showcase cabinet that the sovereign made accessible to the public as the first ruler in Europe. 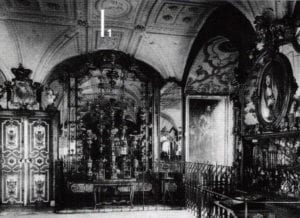 The Green Vault before destruction during the Second World War

The Green Dresdner, a pear-shaped stone weighing 41 carats in a beautiful apple-green hue that was found in India, is a truly exceptional exhibit. This is most likely the largest green diamond in the world. It was united with two large, white diamonds (31 and 13 ct) and a large number of smaller diamonds in order to create an artistically suspended artwork, which is almost reminiscent of a medal. It appeared for the first time at the Leipzig Trade Fair in 1743, where it was sold to Frederick August II of Saxony by a Dutch merchant. It has been part of the famous crown jewels since then.

The extravagant August the Strong paid the equivalent of 1 million US $ for the White Dresdner. At the time, this was the highest price ever paid for an individual diamond. The rectangular, 49.71 ct stone in virgin, unblemished white also comes from India. Like the Green Dresdner, it was set as a pendant in the form of a medal with 19 other large diamonds and 216 smaller ones.

The overall Baroque artwork of the Green Vault, consisting of magnificent exhibits and enchanting presentation, remained almost untouched until the Second World War. Three of the elaborately designed rooms in the Green Vault fell victim to the attacks on Dresden on February 13, 1945. The movable artworks had already been removed to the safety of the Konigstein stronghold in the sandstone mountains of the Elbe nearby. The collection was confiscated directly after the war and taken away to the USSR. It was returned to Dresden in 1958 and was on show in the Albertinum for roughly 40 years. The reconstruction of the castle has been ongoing since 1991. Therefore, after over half a century, the first part of the world-famous jewelry can now be returned to the Residence.

The historical, vaulted rooms of the castle’s West Wing will also open their doors to mark the city jubilee in 2006. In these rooms, the precious artworks are not in showcases, but stand instead freely on the mantelpieces of the magnificently designed exhibition walls and on the fabulous tables. Passing through these rooms, visitors will therefore experience with all senses a Baroque work of art, the treasure trove as it was originally intended.