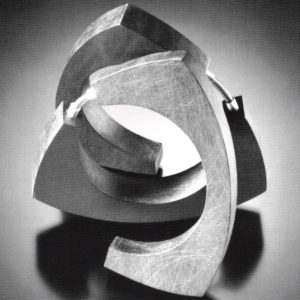 Marcia Bruno has had to work long and hard to reach the level of simplicity for which she is becoming known in her plastic jewelry. After all, she has only a few minor considerations: line, form, shape, color, and balance. She does not make use of the time-honored fallback position that is open to all artists, which is distraction by excess. It is so easy, when working with an additive medium such as metal or plastic, to just keep on joining elements and hanging things off of other things and marrying metals until the viewer or the hapless wearer is hoping – no, begging – for  all those married metals and other materials to get a divorce, or at least an amicable separation and divide their assets into two separate households so that we can all get back to the basic business of line, form, shape, color, and balance. Bruno’s work is pared down almost to its essence, to the point where if you removed any extraneous element the work would quite literally fall apart, as you would have to be removing screws, nuts and bolts, and pin findings. Her work is the artistic equivalent of the No Frills Flight. 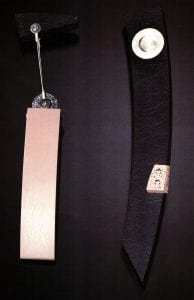 Marcia Bruno is as straightforward and unpretentious as her work, and like her work she has had to go through a process of paring down to get that way. She made her choice of career in typical undergraduate fashion – she knew she wanted to be an artist, but the sculpture class was full so she signed up for jewelry. From such a humble and unpromising beginning came a great passion for and dedication to the processes of jewelry-making. Bruno ended up graduating from the metals program at the Tyler School of Art in 1988. Stumbling into metal at Tyler had been an unexpected whim of fate, one of the gifts that the Muse doles out so grudgingly. At Tyler she found support for her love of industrial processes and materials. “At Tyler they showed us every jewelry process known to man”, says Bruno. “There was a section on machine tool processes, electroforming, coloring of metals. Everything but enameling.” Bruno dove into the technology; some of her undergraduate work looks as if she were trying to do all the new processes on the same piece. She was fascinated with new materials and with color. She started to experiment with anodizing aluminum and then began to combine bits of plastic with the aluminum, until finally a graduate student showed her how to laminate plastics. From then on she and metals parted ways. “I just went nuts for the technique”, says Bruno, “I started using a little more plastic, a little less aluminum, until I found that for me the aluminum techniques held less interest than the possibilities of plastics.” 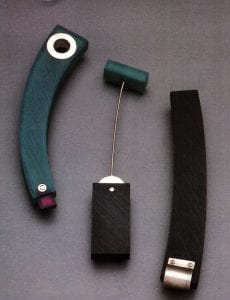 When Bruno graduated from Tyler and decided to look for a graduate program, she had to choose between San Diego, “where the weather was perfect”, and Seattle, “where it poured rain the whole time I was there”. She chose Seattle because she felt that with all the rain it was probably a place where she could get some work done. 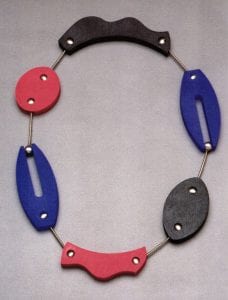 It proved a fortuitous choice, particularly since Bruno was given a job as a shop technician in the Industrial Design department. At the University of Washington, though the metals instructors Mary Lee Hu and John Marshall, are metalsmiths in a very pure sense of the term, Bruno felt supported in her explorations of nontraditional materials. “I’m sure that John and Mary took one look at my plastic work and thought, ‘Oh my God, what are we going to do with her?’”, Bruno says. Still, it was at the urging of her graduate committee, which included Hu, Marshall, and faculty from the Industrial Design department, that Bruno began to try to pare her designs down to their essential elements. “They encouraged me to take one section of the piece and focus on it. It has taken me all this time to get all the extra elements out, to pull back enough to be able to use elements that are a blown-up version of what used to be many individual connections.” 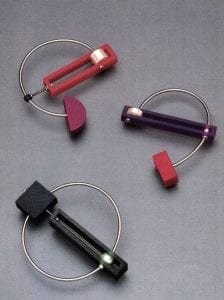 Bruno was always interested in building. As a child, she helped her father with carpentry projects. Even when she was young, her father treated her as though she were a capable builder, and she grew up assuming she could make whatever she put her mind to. What she mostly thinks about are shapes and colors. “The process of making objects gives me ideas”, she says. She is fascinated by connections. She gets inspiration from architecture, furniture, and an outdated physics textbook of her husband’s, which has bookmarks in every page to mark its fabulous ideas, and which she handles so reverently that you would think it had been printed by Gutenberg himself. She loves expansion bridges because they embrace the laws of balance and tension that she strives for in her work. “When I see a shape, I think jewelry. When I am on the bus and I see vents on the tops of buildings, I just know I have to make something with vents”, she says. 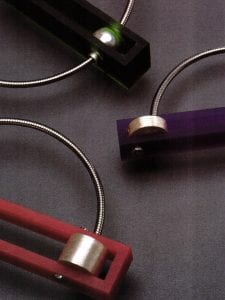 Bruno’s new works are pared way down from the cacophony of some of her earlier student work. She has constructed hollow shapes from acrylic plastic and connected the shapes from acrylic plastic and connected the shapes using guitar strings, which suspend the elements in a stable yet fluid relationship to each other. In other words, the guitar strings allow the pieces to move, but only as far as Bruno wants them to. There is tension between the mobility of the elements and the control that Bruno exercises in her placement of those elements. The pieces are kinetic, yet they are held in place by the literal tension of the strings, as well as by the visual tension Bruno has created with her choice of color and shape. 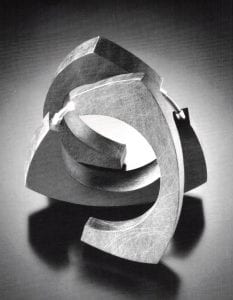 Her pins in the Galvanometer series are a study in asymmetrical balance. The galvanometer is an instrument (from her sacred physics text) used to measure the strength and direction of electrical current, and these pieces are imbued with a directional energy that comes from the suspension of their elements at the ends of the bound wire of their guitar string tethers. Each piece has a focus – a sterling silver element trapped in an acrylic box, the sterling sending back the light, the plastic taking the light and keeping it. The acrylic elements look as though they could fling apart at any minute from the force of their attaching guitar strings. Yet, there is a quirky kind of balance that guarantees restraint. 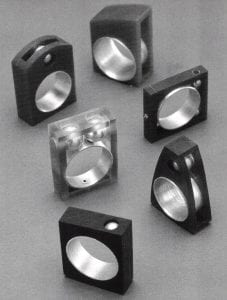 Bruno’s Untitled Neckpiece is a large piece that she distilled from a more complicated idea. It is made of six hollow acrylic pieces connected by a simple arrangement of sterling ball bearings and steel guitar strings. Bruno sets up a rhythm of color and shape that is more peaceful and fluid than the Galvanometers. This pieces meanders around in a circle, its soft red, blue, and black shapes suspended in graceful, rhythmic counterpoint; it looks unlikely to spring apart in a burst of pent-up tension. This work is like the sequence in the movie Fantasia, where the conductor is introducing Mickey Mouse to the various instruments in the orchestra. Each instrument makes its sound and the sound appears on the screen as a shape and a color. Several instruments together make several distinct shapes and colors, and the whole orchestra makes a rhythm of shapes and colors. Bruno’s medium is plastic, not music, yet she achieves the same sort of harmonious visual translation of tension and balance through color and shape. 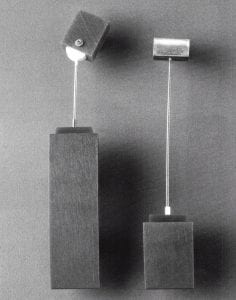 This piece is perhaps the simplest of Bruno’s works, and it is also one of the most recent. Is she still in the process of paring down her vision? “No”, she says somewhat mournfully, “I’m going back up again. But not to where I was in undergraduate school. These pieces now are mostly design problems for me. I try to make myself a problem and make it work visually. I try to make pieces that are clear and minimal, but it’s hard for me to keep from adding things. I’ve had to learn how to take things out when there’s too much going on.” 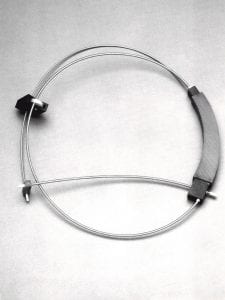 “I don’t know if my work has any meaning,” she says, “but I like it when the shapes and images remind people of something from their own lives. I try not to be too literal. I want my work to make people draw their own conclusions. I would like to use shape and tension and color to make people think of things from the own lives, sort of like in a Fellini movie.”

Dana Standish is a metalsmith and writer. She lives and works in Seattle, WA.

All articles by this author
Previous The Wearability Issue
Next Donald Friedlich: The Visual Articulations
Social media