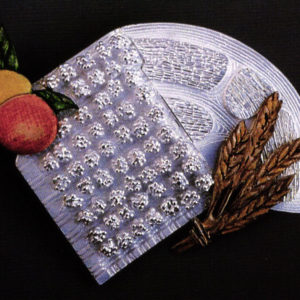 Some people keep written diaries, others carry a camera, while others use the latest in video technology to record their memories. Then there’s Lynda Watson-Abbott.

She does keep photographs, postcards, rocks, bits and pieces of metal and glass, papers, small sketches and notes – all kinds of paraphernalia, scraps of ephemera, reminders of various experiences and travels. All can be found on walls, in drawers, stashed on shelves, and stacked on countertops in her studio in Santa Cruz, California. It’s her own private library, a repository of inspiration for future reference. 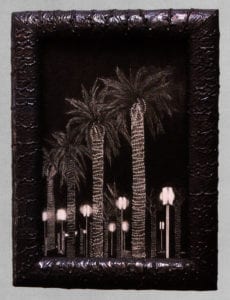 But, unlike other people who gather their memorabilia and put it into scrapbooks, photograph albums or tape libraries, Watson-Abbott translates her memories into small, delicate brooches and miniature sculptures – and lately, into an even newer mode of self-expression. They tell “stories” that are filled with imagery of how the artist perceives the world around her – comparisons and contrasts, her own look at life and all its adventures. These stories and personal observations range from small incidents to reflective views on topics as diverse as technology versus tradition; from short day trips to 11,000-mile drives across the United States; from travels in Japan and Mexico to the houses on her street. “These are my visual diaries,” the artist points out.

Each trip has inspired a different series. In her East/West/North/South series, Watson-Abbott juxtaposes symbols of various places to explore the contrasts found in the American landscape. These small brooches are images mixed and matched, resulting in often humorous and always perceptive visual ruminations. In North/South/MN/AZ, a miniature citrus grove reminiscent of those spread across miles of southern California sits adjacent to linear fields of Minnesota wheat. Etched in sterling silver with permanent markers for emphasis, green-leafed orange and yellow fruit frame the grove just as a golden brown shaft of wheat underscores its ridged field.

The symbols that frequent many of these pieces not only reflect the artist’s personal recollections but also offer the viewer a sense of awareness – of a familiarity of place. In East/West/NE/NM the customs equated with two such diverse areas of the country as the southwest of New Mexico and the New England coastal plain of Cape Cod are combined imaginatively. Sterling silver clapboard eaves provide a background for cut-out silhouettes of buoys; a three-dimensional sea-blue and gold painted buoy hangs in front, while a stippled slice of sterling silver wall suggesting southwestern stucco abuts the clapboard; a hanging string of red-painted chili peppers completes the piece. 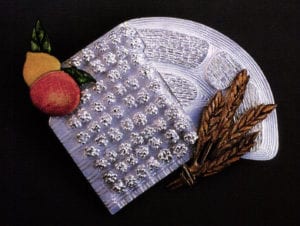 A sterling silver lighthouse tapers to its base, only to rise again as an oil derrick; the Jefferson Monument’s mirror image becomes a southwestern adobe oven; the graveyards of New England are counterbalanced by the skyline of Dallas. AII are innovative ways of seeing. Although they are very much the personal statement of the artist, they are presented in such a thought-provoking style that it is easy to understand why viewers are taken by them. Highly imaginative and beautifully crafted, only their humorous insights keep them from becoming too pristinely serious.

With each new series Watson-Abbott has altered her style of presentation. In the Times and Places series the pieces are less recognizable, more abstracted; the symbols incorporated into them are even more personal and less representational than those in the previous one.

In Times and Places – Reno, one edge of a skeletal triangle has three 7s cut from its center, a reminder of the artist’s $100 win in a 777 slot machine jackpot in Reno. A trilobite found in a small store along Highway 50 in Nevada has been worked into a wedge of fine silver. The colors of permanent markers echo those found in the landscape. Small pieces are based on minor incidents – enjoying a picnic in the Rockies, seeing lava beds for the first time – fragments of memories replicated in sterling, semiprecious stones and assorted metals.

In the spring of 1987, Watson-Abbott took a sabbatical from teaching and traveled to Japan. The country provided her with a new opportunity to rethink the direction of her work. The result was a series of small sculptures that focused on the extreme contrasts often found in that country. “I was fascinated by the fact that tradition and technology live side by side and that nobody notices or even thinks about it. For instance, you see people dressed in traditional kimonos riding on lightning-fast trains – or a tiny confection stand built from bamboo sitting adjacent to an amazing high-tech lens store.”

From this perception come such unexpected pieces as Japan – Tradition/Technology #3, a miniature picture framed in the Japanese style. Its surface, instead of reflecting a traditional landscape scene, shows a photo-etched vision of a compact stereo. In another, Japan –Tradition/Technology #2, a sterling silver state-of-the-art television set sits on a pseudo Japanese stand, its screen wrapped in strips of traditional fabrics and silk cords. 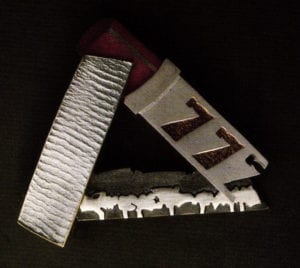 Although her pieces average only 2 to 3 inches in length and usually less than 2 inches in width, the artist draws every shape before translating it into metal. “I draw everything again and again and again. For every piece that gets to metal, I probably make 15 to 20 sketches that I don’t do.” But once she has decided upon a design, then the piece is fabricated. “I start with metal, sheet and wire, then build.” Some of the pins have cast parts, depending on what shape she needs.

Even though she likes working with gold, Watson-Abbott works almost exclusively with fine silver. “It’s almost white and provides the perfect background for adding colors.” she often uses permanent markers to add color and emphasis to parts of her jewelry. “I also like the color in and of itself, and in combination with such base metals as bronze, copper and brass.” While some dealers prefer their artisans to use more precious metals, Lynda uses whatever it takes “to enhance my work – after all, it is my personal statement,” she explains. “I never liked the idea of people telling me what would sell and what I needed to do in order to sell my work. I feel I’ve bought my freedom from those problems by teaching.” She teaches full time at Cabrillo College outside Santa Cruz.

Her pieces have on occasion been accused of being too personal. “My work is very narrative. The idea that I’m trying to get across is very important to me.” Although Watson-Abbott’s main concern is with her own vision, she has listened to the suggestions of dealers on occasion. “I recently had a dealer in Los Angeles ask me to create some pins that people would really want to wear. I decided to design a series of houses. I thought people would respond to houses and structures,” she explains, pointing to a group of pins of intricately designed buildings, so exacting in detail that they resemble architectural models complete with exterior landscaping.

The small scale (averaging 2 x 3 x ½”) and remarkable craftsmanship make these pieces universal in appeal. Among them are a Massachusetts log cabin complete with Adirondack chairs on the front porch; a typical California bungalow; a house trailer surrounded by a thicket of junipers; New England clapboard cottages; Santa Fe adobe houses. She does not need a camera to catch the intricacies of design and scale – she has a most discerning eye. 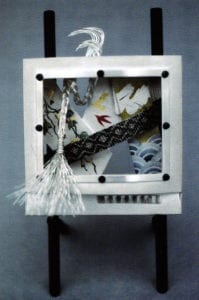 “Many of these come from what I see as I take walks around my neighborhood. I pass these houses in the evening and sometimes make up stories about what’s going on inside. They reflect my thoughts as much as my observations.”

A trip taken in the summer of 1991 became the impetus for Watson-Abbott’s radical change in style. “Last summer I stopped doing jewelry and began combining drawings and graphics with metal. It’s a new interpretation of what I’ve been doing all along. For years I’ve wanted to find some way to include graphics and drawing with the metal. This new way of working feels very comfortable. I am very excited about it – it’s fun for me and I can see it going on indefinitely.”

Not quite collages, not simply drawings in frames, these new pieces have allowed the artist to express herself more directly. “I’ve spent my whole life trying to break things down to make abbreviated statements that end up not really satisfying me. And not getting what I want to come across.” Now all that has been altered. 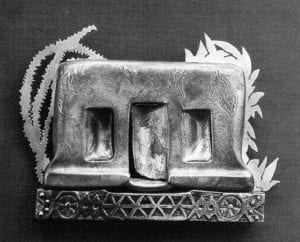 She began the pieces while she was staying with friends in Mexico. She started by drawing parts of the house and then replacing parts of the drawings with objects. Each picture’s frame became a continuation complete with the same bits and pieces that she used in the drawings.

In Como? “Flecha Amarillo” a Prismacolor pencil drawing of adobe lean-tos covered with vegetation reflects the warm earth colors of the Mexican landscape. The wide wood frame is covered with brass cut-out objects, the artist’s own milagros; a religious figure sits at the top center of the frame as if blessing the scene. Other pieces include a rain-swept patio complete with a three-dimensional umbrella, and a terra-cotta colored picture of a tiled sink framed in nickel silver, with tacks representing the Imodium tablets travelers in Mexico are so familiar with. The colors, the juxtaposition of three-dimensional objects echoing the two-dimensional objects in the drawings are all combined imaginatively to create the latest venue for the artist’s keen eye and subtle sense of humor. 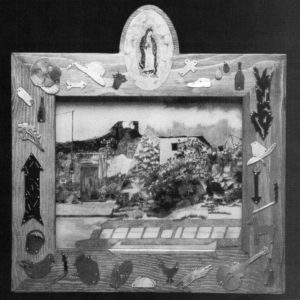 The evolution of Lynda Watson-Abbott’s work from sculptural pins to miniature wearable sculptures to free-standing sculptural collages is continuing. By insisting on keeping her visions and statements on a personal level, she has filled her art with her own sense of self and the world as she sees and interprets it. Where this ongoing transformation is leading not even she knows for sure, but there is a large audience waiting for the next segment.

Dorothy Spencer, an arts consultant based in Philadelphia, is the author of Total Design (Chronicle Books, 1991).