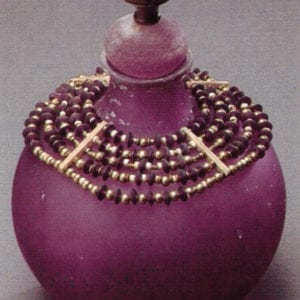 Heroic in scale, the prayer beads of Jenny Pohlman and Sabrina Knowles could be envisaged draping the bosom of an Olympian goddess or the wall of a downtown gallery with equal aplomb. Drawing from a primitive ground of inspiration, these artists combine the ancient arts of glass sculpting and metalsmithing to create “architectural adornment” that resonates with mythological, anthropological, and feminist themes. 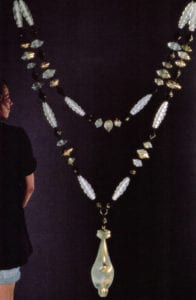 Archetypal icons such as the Venus of Willendorf are joined with prayer beads to create a cross-cultural devotional relic, magnified and abstracted into monumental jewels that elicit a visceral shock of recognition from the viewer. Yet, they are rich with submerged meanings as well. In the artists’ cosmology the female is exalted not only as a “fertility figure” (a “safe, non- threatening label” in the context of the 20th century, according to Pohlman), but as the deep source of fecundity from which the spiritual and creative demiurges emerge into the physical world. The artists are also intrigued by the recent discovery in Kazakhstan of the remains of 6th and 4th century BCE women warriors, some of whom were buried with daggers and bronze-tipped arrows, one with legs bowed from horseback riding.

A master glass sculptor, Knowles carves classical, sensual, female forms in molten glass. Suspended from Pohlman’s 12’ chain of exquisite prayer beads, her 21” Venus is a remarkable figure of amber radiance, plenitude, and shimmering power; her neck tightly coiled with copper, her belly a bowl of shifting light. This graven image slices instantly through politicized and denuded contemporary notions of sexual equality and returns one to the age when the cult of the goddess prevailed. Pohlman’s offhand sculpted beads, in natural colors of carnelian, quartz, and moonstone, echo the luminous helixes and shell spirals found in nature, creating a subtle rhythm on the strand. Their soft lustrous feel suggests that these relics have been worn smooth by centuries of mendicants, and the urgency of whispered prayers. 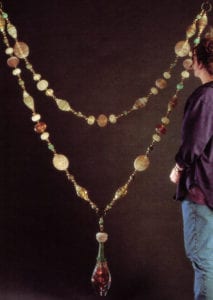 Knowle’s and Pohlman’s seamless collaborative work evokes the mystery of ancient civilizations and the dream of a common ancestor. Inside the belly of a translucent white Venus, her body misted with gold, nestles a copper scroll inscribed with a poem by Pohlman and sealed inside the figure while it was still glistening white-hot. The scroll might carry a message for the 21st century and the seeds of a new feminine mythology firmly rooted in the past. 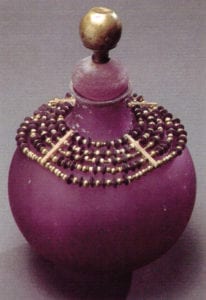 Lisa Kinoshita is a writer who lives in Seattle, Washington.