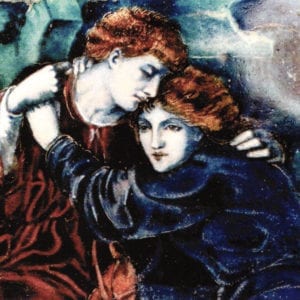 Love Among the Ruins

The fine and fascinating enamel plaque shown here [Pic. 1] is a copy in enamels after a painting by the famed pre-Raphaelite artist, Sir Edward Burne-Jones, titled ‘Love Among the Ruins’. The original, very large painting was much admired and was included in several publications in its own time and ever since. The very much smaller enamel copy is now in the possession of Onn Tammuz, who purchased the plaque by auction, in 2004, when the only information was that it had come from a private collection in the US. The enamel picture is signed and the painter added ‘d’apr6s Burne Jones’. The signature, in liquid gold fused into the glaze, [see detail, Pic. 3], is slightly indistinct: the initial seems to be the capital letter M or N, while it could be a cursive P. The third letter in the surname may be read as – Augé, Auzé or Aujé. The balance is towards Aug 6, which is the surname of a family of artists of Limoges [France], known to be active in the 19th century, and included two members with the initials M and N. As far as is known at present, they were not associated with enamel paintings. Philippe Augé, born in 1935, also became an established painter, and a known picture by him [not enamel] depicts stylized, elegantly dressed young women, with a crisply coloured décor following the Art Deco style. At best, any similarities to the enamel plaque of ‘Love Among the Ruins’, are tenuous. However, Phillipe Augé may have included enamel painting in his output, and such an attribution means the piece would have been made no earlier than the 1950s. Enamel painting was re-established in Limoges in that decade, but tending to modernistic rather than revival styles. With regard to this enamel picture, my feeling is that there is a strong influence of the Art Enamelers of the late 19th and early 20th century in this piece, and, lacking additional clues, I would concur with dating to that period. 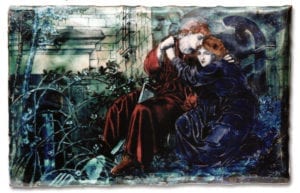 The Art Enamelers, who followed the influence of the leaders of the pre-Raphaelite artists, and notably the designs of Dante Gabriel Rossetti, William Morris and Edward Burne-Jones, emphasized the colors and symbolic qualities of their pictures. The enamel plaque of ‘Love Among the Ruins’ retains the mysterious quality of the Burne-Jones composition, with its distinctive face painting. The use of clear blue enamel over white, for the background for the figures, adds depth. Where the blue is fused over shaped paillons of silver foil, this produces the glitter of moonlit leaves and sparkling water. With the changes introduced in the enamel copy, the faces have a slight tint, and thus appear more naturalistic than the pale, and even wan images that were favored by Burne-Jones for his artwork in the 1870s. The robes of the figures are given eye-catching color with the enamels. The Burne-Jones picture was first created in 1873, as a watercolor work, and was described by contemporaries as ‘a most beautiful composition’. Unfortunately, the watercolor version was destroyed by accident. The picture was recreated as a large format oil painting by the artist 20 years later, and was exhibited in 1894, which was also the year that he was made a baronet. It is among the narrative compositions that represent Burne-Jones’ credo, stated in writing to a friend: “I mean by a picture a beautiful, romantic dream of something that never was, never will be – in a light better than any light that ever shone – in a hand no one can define or remember, only desire – and the forms divinely beautiful”. The enamel painting that was inspired by the original picture, despite the reduced format, retains this dreamy, tantalizing quality. 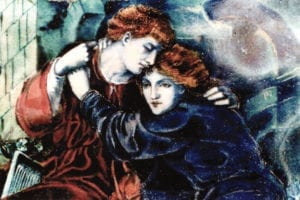 For this enamel picture, a few technical problems arose due to the use of a flat, rectangular copper plaque measuring 10 inches by 6-1/2 inches [c. 25.5 cm. x 16.5 cm.] The appearance of the counterenamel testifies to several stages of firing – perhaps 8 or more. With such a format and number of firings, the copper dished slightly where the glaze is thickest, and there is a little distortion of edges, due to the enameling process. The Art Enamelers worked towards the appearance of the image, to give ‘meaning and originality’ and accepted such minor technical imperfections, which they felt emphasized the complexity and individual treatment of such work. 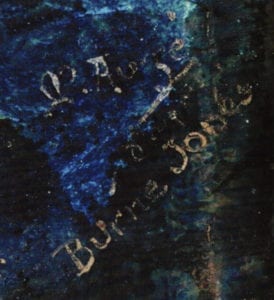 Picture 3. Detail of Picture 1, showing the signature, and the legend ‘d’aprés Burne Jones’, written in liquid gold and fused into the glaze. Photo by Onn Tammuz.

Additional information on the enamel painter has not been found so far. Onn has made quite numerous enquiries by writing and phoning various possible sources for further details. He contacted people in France, in England [where the original Burne-Jones painting has remained], and in the USA. Minimal response has come back from the museums and individuals contacted so far. The work will be interesting for readers of GOM to see, and perhaps the name of Augé will stir some memories. It would certainly be satisfying to find more about this artist in enamel. Any suggestions on further researches into the possible source of this enamel picture would be most welcome – contact directly via email to onntammuz@blueyonder.co.uk, or via erikaspeel@yahoo.co.uk. 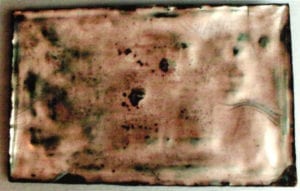 Picture 4. The back of the plaque shown in Picture 1.