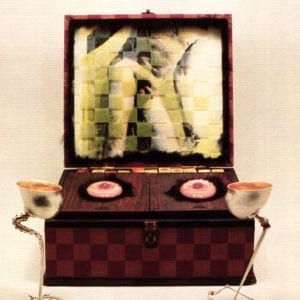 The focus of Lin Stanionis’ work for the last three years has been in exploring the implications inherent in the vessel form when it is employed for symbolic purposes. As a vehicle for this search, she has produced a series of liqueur cups, whose symbolic potential is carried forth in a personally constructed narrative.

This work speaks of the luxury of the 1980s as well as the spirituality inherent in medieval objects. For Lin Stanionis, surely “the empty vessel makes the greatest sound.”

“This series of pieces is intended to be playful and elegant, wearable and useful. Their conceptual development is a response to form, function, materials and experimentation. Often, the content of these pieces manifests itself in playful sexuality.”

Ganoksin is sponsored by
“This series of pieces is intended to be playful and elegant, wearable and useful. Their conceptual development is a response to form, function, materials and experimentation. Often, the content of these pieces manifests itself in playful sexuality.” 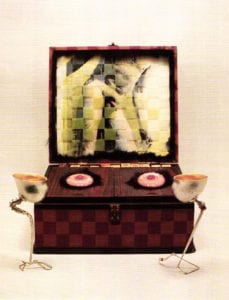 Sex, sensuality, the body, the vessel, subconscious desires and delicious libations, ritual and romance. Whenever we feel even a faint connection between our attraction for common, inanimate objects, like corpulent drinking cups, and a suppressed need for carnal pleasure, we attribute the urge, reluctantly, to a state of surreality, a fantasy somewhere beyond what our mind knows to be proper. And then, when we dare to indulge in these playful illusions, we have a sneaking suspicion that we are in the throes of a devious art, a spell that casts confusion over our psychic normality.

Lin Stanionis, a 1981 graduate of that laboratory of holloware Indiana University, has been titillated by the scant difference that separates, say, a satisfying elixir from a ritual intoxicant. Optically, her drinking cups conjure up fantasies, in their mangled incoherence of preposterous images, that suggest vices, dreams, madness, passions, invented customs, sordid bric-a-brac, debauchery — auguries that far exceed a rigid framework of sterile beauty.

It is almost as if she takes the art of drinking to an extreme as an incestuous rite. We drink, first noticing the features of the vessel. Then, bringing it to our lips, the liquid enters our body, to be felt haptically, that is, to have our inner system respond to something in some way that we don’t fully comprehend. Only later do its aftereffects return to influence taste and, consequently, our appreciation of the cup and the ambience of the entire ritual. The body is central to experience; it is subject and object of experience. All else is stimuli.

The body as host – in Stanionis’s China Closet, she pays homage to Duchamp, someone who also used representations of the body to inflict psychic scars, with its rubbery breasts, chessboard inlay and reverence to some unknown Adonis. It is Duchamp’s breast book cover, isn’t it, or is it a jewel box or a reliquary (both goldsmithing icons of a different type), where a saint’s private parts, disinterred relics, are preserved for their spiritual powers. 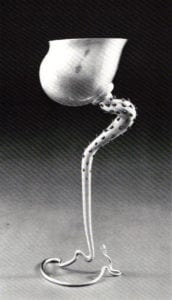 But, lo and behold, in Stanionis’s box, there is a set of liqueur cups, his and hers, vessels of power, chalices for transubstantiation, changing bread and wine into body and blood. The bowls are like little bellies, full little bellies, that sag contentedly. Their stems, however, are more desiccated than would be expected beneath those cherubic paunches that carry the aphrodisiac. Such chicken or frog legs would be a more appropriate pedestal for something you masticate rather than for something you might savour as a reprise to an elegant meal or a suave cocktail to commence a night of expectation.

A bony joint grimly serves as a knob for gripping the stem, a macabre line that peters out like a limp vein, an amphibious tail or sometimes a puddle of unmentionable secretion. A ghastly attack on fragile sensibilities would have no better utensil — if you were ready for this kind of seduction, you would probably be expecting the Marquis de Sade.

“The emphasis in this work is to produce vessels that have interpretive intent concerning individuals and events. That is, these vessels carry a consciously constructed, visually implied narrative, the content of which stems from direct experience and references both myth and place.” 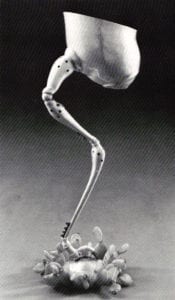 This work recognizes historical precedents in the reliquaries and religious icons of the Middle Ages, specifically, the Stavelot Triptych and the Black Madonna of Czestochowa. These shrines embody, for me, the potential power of objects used to impart the spirituality and symbology inherent in ritual and commemoration. Just as these and other medieval objects exalted ideals through the enshrinement of objects, so too did they seek to instruct via visual narrative. {Lin Stanionis}