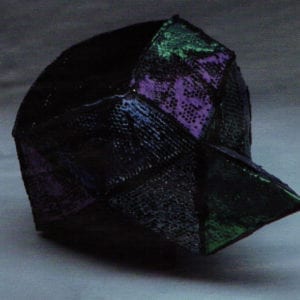 “What’s so good about enameling is that you can learn a new technique and then approach your work with a new bag of tricks.” Alana Clearlake

Alana Clearlake is a California enamelist active in establishing new paths in the field. Often known for her contributions of time and knowledge to others both on the individual level as well as for group events, Alana experiments and then shares her discoveries. This article explores Alana’s Origami Series, which uses copper mesh to form vessels. 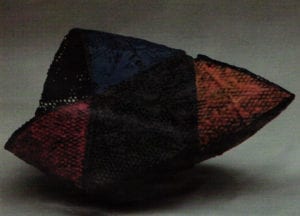 Earlier innovators such as Joe Spencer have used fine mesh or even “chore boy” pot cleaner pads to act as supports that can be shaped or used as cloisons. For two years Alana shaped copper mesh into vessels of airy and organic appearance. The artist applied color in the form of beads, opalescent, opaque and transparent enamels. She reinforced the edges of the mesh with copper wire. According to “The Dictionary of Enameling” by Erika Speel, cloisonné de plique might or might not define the mesh vessels that we now name “cloisonné and/or “plique a jour”. Classically defined “cloisonné de plique” is a pre-byzantine glass technique that produced a disk of glass with embedded cloisons. Basically a glass powder was fused in the empty areas of a grid that consisted of gold strips; forming a solid piece that could be looked through. We need a new term other than “mesh plique a jour” for this exciting technique as we explore the sculptural possibilities. Perhaps “3 D mesh work” or “free form mesh work” might suffice.

Alana says, “I was doing the free form mesh pieces for a while. Then a year ago I wanted to continue using mesh but to move in a different direction from the organic forms.” That was the start of the Origami Series. Origami is a time honored, Japanese paper folding technique. Paper cranes come to mind as a world wide popular example.

Origami forms are often symmetrical, can involve more than one piece of paper and have been created with metallic papers of beautiful designs. Some are shaped as boxes, which Americans might define as “vessels” as they are enclosures with an opening. Alana mentions that “a vessel implies an inside/outside. That’s what I like to work with. Because my enameled mesh vessels are not functional, they could also be considered sculptures”. She adds with dry wit, “it would be pretty hard to keep any liquid inside these”.

Alana says, “In my research I discovered the book, Unit Origami, by Tomo Fuse. Unit origami uses identically sized pieces of paper that are folded into units. The units are joined using slots and tabs to form a polyhedron. I took the concept of the units to join them into a asymmetrical form with a visible opening to make a vessel rather than a closed shape.”

Rocket’s dimensions are 3.5 x 6 x 5 inches. “The difficulty of the origami concept is that origami is often symmetrical. I began by practicing folding paper in order to learn the technique. Symmetrical forms need to be very accurate. If the shapes are not close the form looks wrong. I recycled a lot of paper. I pushed the forms into asymmetrical shapes, which is more visually stimulating; less static.

Alana starts with “copper impression” mesh made by American Clay Company (Amaco) for the base form. After folding and assembling, she compresses the mesh at the folds. Since mesh is fragile, pressing with a mandrel, spoon or using pliers is better than a vise. A telephone book underneath helps protect the mesh from breaking apart.

The thinness of the material and heat will cause the mesh to deform during firing. “Be open minded with how the work reforms itself”, Alana says. “Any time you work with light weight material there is a potential for change during firing.” She speculates that the mesh wire intersections will become reinforced or even solid with the added layer of copper deposits using electroplating. Electroplating is a process that allows metal particles to be deposited onto metal surfaces in a thin, even layer with the use of electrical current. Having recently moved, Alana has yet to set up her electroplating bath to find out if her idea is correct. 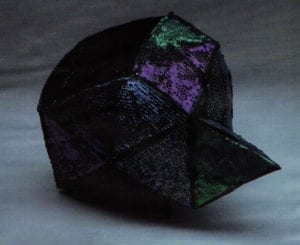 Moving along in the process of creation, the entire shaped form is dipped into black, liquid, porcelain enamel*. Thinner liquid covers the wire and fills some of the cloisons. Thicker liquid not only fills in the mesh but acts as a reinforcement. In general, the thicker the enamel layers, the longer the firing. Start conservatively with one dip. Fire at 1450°F for a minute. Then recoat and re-fire two to three times to suit your taste.

Origami shapes can be difficult to rack. Rocket has triangular, origami feet of tooling foil with tabs that are intertwined with the previously coated and fired mesh, with the fused enamel acting as a glue. Repeated firings and additional applications of enamel may be necessary for completion of this step.

Rocket’s colors are Thompson’s “solid color decal” sheets**. Placed upon the black undercoat of enamel, the high color contrast pushes this piece’s colors and form into contemporary art while referring to the strong coloration of traditional Origami papers. The decal sheet is cut to shape while still on the backing paper. Carefully floating the decal on top of approximately an inch of luke warm water in a bowl causes the paper backing to drop away. Alana finds the delaminated decal sturdy enough to pick up with her fingers, then lays it onto the enameled wire mesh. A Japanese brush could be used if the decal is cut into small pieces before floating. Place the enamel decal on the surface, using Klyr-fire as a holding agent, then allow it to dry. A heat lamp may be used for 3 to 5 minutes. The bright colors stay on the surface of the mesh when fired at 1450°F degrees for 1.5 to 2 minutes. 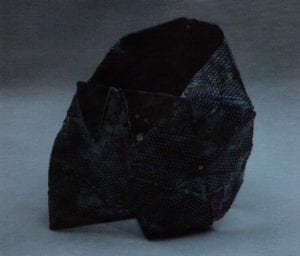 Fly Me Away, by Alana Clearlake. Enamel on copper mesh.

Fly Me Away measures 5 x 8 x 4.5 inches and has more see through areas. This time Alana added distilled water to the mixture of black, porcelain enamel. The work was dipped in the porcelain enamel. The feet are fired on using that enamel layer for glue. Again Alana applied decal enamels, this time Thompson’s “Carefree lusters decal sheet***. When drying the luster decals take care to not over heat them by temperature or time to avoid curling. Keep the lamp six inches distant. Fire at 1350°F instead of the higher temperature previously discussed for color decals. Again, traditional origami is intentionally referred to as Alana says “I want to create my own origami but allude to the tradition as well.”

Our last piece, Feline, is “how a cat appears when you look out of the corner of your eye,” according to Alana. It was fired upside down using the bare silver tabs as trivets which were designed as part of the top of the vessel. These tabs are 30 gauge silver but might do better using a lighter gauge. Alana had difficulty with them adhering to the mesh form. The solution for this was to cold join, using rivets. The undercoat was Thompson’s Base Coat****. Mix it with distilled water in a narrow, deep container for easy dipping. A transparent, even coat is difficult to apply but this can be accomplished with patience. As might be expected, the mesh will always be partially opaque due to the layers of intertwined mesh.

As for Alana’s future works, she says “I have to keep moving on; doing new and different things because I get bored fast. Which is why I do jewelry, wall work, formed vessels, pierced plique a jour… I rotate between the different techniques. Refreshed, I come back to what I’ve done before, ready to do a new series in one of these favorite areas.” Alana’s innovative mind brings us views of the limitless possibilities in enamel. To see more of her work, please visit www.alanaclearlake.com.

Ganoksin is sponsored by
www.alanaclearlake.com.