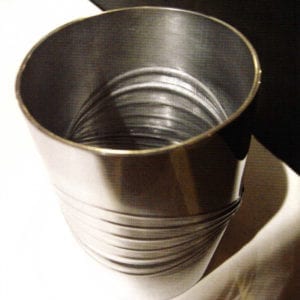 Laser forming is an emerging rapid prototyping (RP) technique that has undergone research worldwide since the mid 1980s. It is a thermo-mechanical process whereby the localized heat input of the laser induces compressive stresses within the material causing it to bend. The process belongs under the umbrella of CAD/CAM technologies, since software can be used to convert a CAD drawing into the data required to drive the axes. 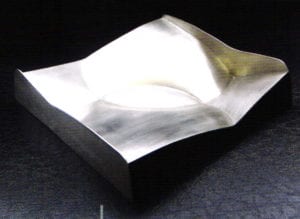 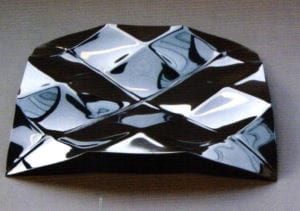 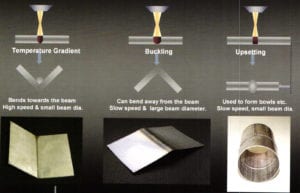 Figure 1: Bending mechanism. Each method is determined by the gradient of compression that is created by the distribution of heat through the metal 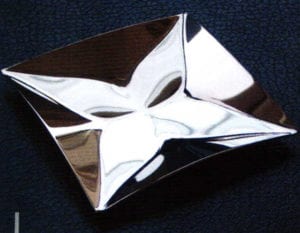 Laser forming typically uses a CO2 laser although forming can also be achieved with Nd-YAG lasers. The laser variables of power, velocity and beam diameter are used to control the heating through the thickness of the material. There are three bending mechanisms, each of which occurs under particular heating conditions; summarized in Figure 1. The process is capable of bending material in either direction and can also shorten the metal through its thickness to create parts through a loss of surface area. This, and the fact that laser forming is a non-contact technique, makes the process a flexible method for shaping metal sheet, tubes and spinnings. On a macro scale, laser forming has perceived applications in the aerospace and automotive industries for producing body panels, whilst on a micro scale, it is already being used in the production of CD players for the alignment of the laser diode that reads the CD (Geiger, 2002) The laser and CNC automation provides advantages of a concentrated heat source that can be precisely directed at the work piece. In light of this, and the recent increased take-up of CAD/CAM technologies within our industry, it does not seem so unlikely that laser forming could find a creative application and be used to prototype, or produce silversmithing objects. Sarah Silve has been working with laser forming since 1997 when she was invited to join The Laser Group at the University of Liverpool on a collaborative project with Buckinghamshire Chilterns University College (BCUC). The project looked at the technique’s potential for creating surfaces suitable for silversmithing and designed metalwork objects.

Trumpf TLF1200W laser. The beam is enclosed within tubes but bounces off a series of mirrors into a 4 axis Bridgeport CNC machining center 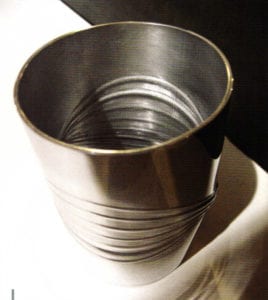 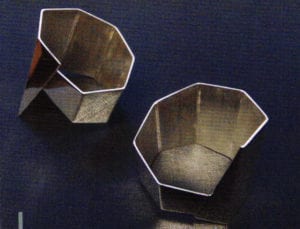 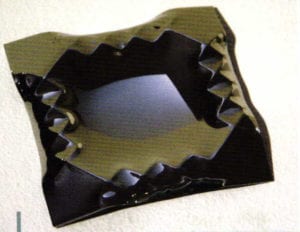 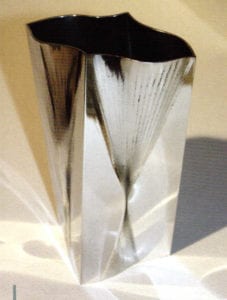 Since the laser bends metal by compression and no material is removed, there isn’t a seam to solder in contrast to conventional hand-scoring methods. Closely offset lines will curve a sheet through incremental bending, and it follows that the smaller the offset between the lines the tighter the radius of the resulting profile. The bending achieved by laser forming is permanent and the metal retains its metallurgical integrity. Laser formed parts may be soldered or modified further at the bench as required. Many geometries result in parts that might otherwise have been made using a press tool. One advantage of forming such objects by laser is that there is no tooling involved, which saves time and costs on machining a billet. This is beneficial for prototyping or producing one offs; however, even though laser forming is repeatable and can be set up for batch production, by its nature it will never be as efficient or direct a process as pressing. As with other technologies which can be applied to many markets or situations, it is a question of appropriateness. Although an ‘upsetting mechanism’ is used to form bowls and tubes through a loss of surface area, the laser can also be used to create dynamic ridges by increasing the wall thickness at the point of heating; see Figure 2. In 2004 a rigorous parameter study was undertaken across five materials including copper, sterling silver and argentium sterling silver. The reason for doing so was that each material has its own operating envelope of parameters and that, compared to materials such as stainless steel, silver has a high rate of thermal diffusivity. The data and analysis now provides guidelines for working across materials. So now the research is at the stage where silver parts can be developed from non-precious metal samples with minimal wastage. Sarah Silve and other members of the Brunel team are always interested in the responses of both designer-makers and manufacturers alike.