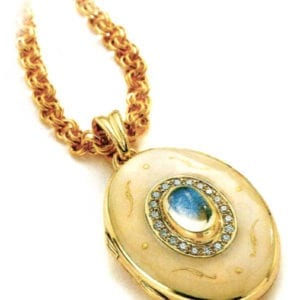 The Key to Happiness

People have attempted to enter into a pact with the occult forces of nature for thousands of years in order to protect themselves against evil and to attract goodness. Symbols of these alliances are still found today – above all in contemporary jewelry design. 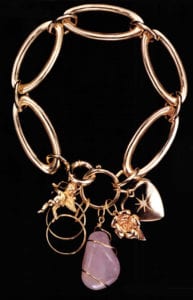 Each of the lover bracelets by H. Stern carries its own symbols: a heart as symbol of love; a rose for youth, purity and perfection; Amour the messenger of the Gods, who hits the lovers with his arrows; a ring as a sign of endless love and a rose quartz. It is intended to ward off misfortune and to allow the person wearing it to fall in love. 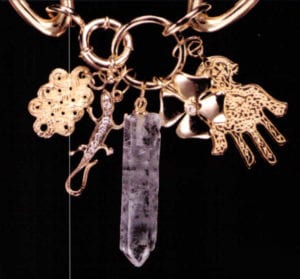 Unified symbols of luch by H. Stern: A peaked crystal is worn as a “stone of power” to protect against evil forces. The lizard, the Hamsa hand and the four-leafed clover symbolize luck, while the eternal knot stands for a long life

In many countries of the world, the horseshoe is seen as a symbol of luck. It can be found above the weather-beaten entrance to an Indian home just as often as on the radiator of a European family automobile. In this way, many symbols have stood effectively as signs for happiness, success, health, prosperity or fruitfulness for centuries and have gained cross-cultural validity. On the other hand, other symbols are used only regionally and their significance is disputed if not indeed opposite in other parts of the world. The pig is a good example of this: whereas it was seen as a symbol of luck in ancient Babylon, it was rejected elsewhere as impure. Among Germans, the pink pet was seen as a symbol of fruitfulness and it is regarded as lucky even today, above all in the Western world.

The golden medallions by Victor Mayer, decorated with fire enamel and gemstones are masterpieces of craft skill. From a purely design point of view, they could have come from a different century, but remain as up to date as they ever could be 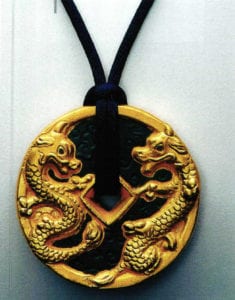 It is a Chinese custom to offer coins as a gift to wish someone luck and attract fortune and prosperity. The dragon on the Lladro porcelain pendant plated with pure gold is a symbol of four blessings: wealth, virtue, harmony and long life that should come to his owner

Modern talismans, medallions and amulets often have a historical background. Talismans were already used in ancient times in order to lend substance to wishes and above all to protect oneself against the hazards of life. In many cases, the symbols of luck are closely connected to a religious belief, for example the crucifix for Christians or Fatima’s Hand for Shiite Moslems. But even without religion, there is a considerable portion of trust in the power of the pendants. Perhaps the same principle applies to lucky charms as we find with other phenomena that cannot be proven: you have to believe in them for them to work. 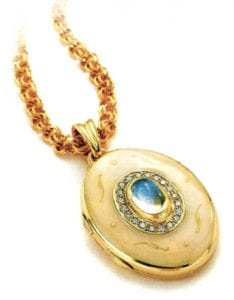 Amulets and medallions once more have an important place in modern jewelry design. Whether charmed bracelets or a heart on a chain, signs of the zodiac or personal pictures, mottoes or precious items that are hidden or presented openly in the jewelry, there is a large demand for symbols of luck, happiness, love and protection. Perhaps it is a question of the speed with which unforeseen events may occur, modern history or social forms of life that make people seek safety and magic in the symbols of jewelry, as they did in ancient times also. In times of flexibility and mobility, characteristics that are demanded of us in our professional lives, it is obvious why we always want to carry a small something or a souvenir of a loved one – a picture, a word or a symbol of them. There appears to be a renewed willingness to believe in supernatural forces. We send supplications to the heavens and wear personal talismans on necklaces. In this, global cultures are growing together. One can often find a colorful crossover of symbols on just one bracelet: Chinese writing, Indian Mandalas and magic signs of the zodiac from Africa are combined with four-leafed clover and symbolic gemstones. 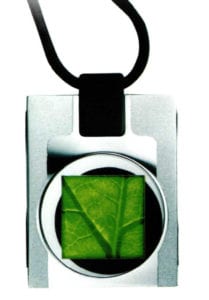 A digital medallion by the Finish cellphone manufacturer Nokia. This most modern of all lucky charms can be used to wear digital photos that express the style of the person wearing it on their arms or around their necks like an item of jewelry 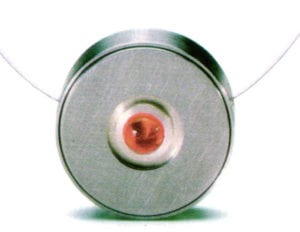 The simple medallion by Anne Kaiser-Kolb replicates old role models in its function. It can be opened and offers the person wearing it space for their own creativity

The manufacturers of modern amulets even make use of groundbreaking technology in order to reach out to young consumers. The ultra-modern medallions by the Finish cellphone manufacturer Nokia are small, intelligent and wearable. Wireless infrared connections can be used to transfer images to the medallions from cellphones or computers. For example, a snapshot taken with a camera telephone can be transferred instantly to the portable display in order to present one’s own personal mood or wishes. 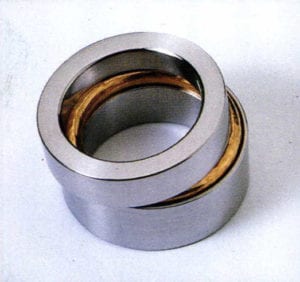 The ring system by Günter Wermekes permits associations with security, protection and a touch of the mysterious. Two perfect and strictly formed stainless steel rings hide in their centers an archaically designed, hand-made golden ring

Talisman – a Roman term derived from the Arabic tilasm = magical image. It refers to a small object that is claimed to possess magical powers. In most cases, it is intended to ward off misfortune or to secure permanent happiness. In the 13th century the talisman spread from the Arab world to Spain, from where the custom of using talismans became a common practice throughout Central Europe. Whereas in ancient times most of the “magical images” in the Orient were pictures or figures of deities (often hybrid figures, half-man, half-animal), later periods also saw the introduction of rings, Abraxas stones and other objects one could carry in order to fulfill this function. These small, portable objects, which were claimed to have protective powers for their owners, are also known as amulets. Therefore, there is no fundamental difference between a talisman and an amulet. 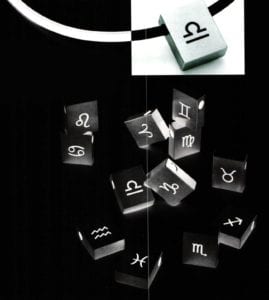 Old beliefs suggest that the wheel of life is divided into twelve signs of the zodiac, each of which has different characteristics. Each sign on the small stainless steel pendants by TeNo, which are threaded on an Indian rubber cord, stands for a different sign

Amulet – uncertain etymology, either from the Latin “to take or turn away”, or the Arab hamail “sword sheath”; an object that is intended to protect against misfortune. Amulets are known in all cultures. They are worn on the body and can be made of various substances. The claws of predators that stone age hunters wore around their necks and that were intended to transfer the potency of the vanquished animal to the hunter are just as much amulets as the Abraxas stones of the scarabaeus of the Egyptians. Primarily, people hope that an amulet will ward off misfortune. Human endeavor to favorably influence one’s own fortunes using mysterious signs and symbols is most widespread in uncertain, superstitious times.

Medallion – French “large medal”, round or oval, folding pendant in the form of a flat capsule to accommodate a relic, an image, a lock of hair and such like.

All articles by this author
Previous Exhibitions in the Pforzheim Jewelry Museum
Next Thema: Stahl – Themes in Steel
Social media