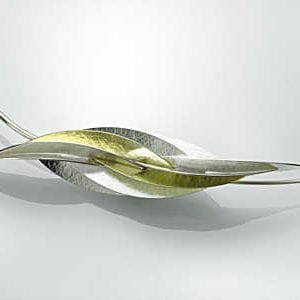 Jewelers’ Stories About Working with Findings

Hey, Mr. Postman, why are your silver ear posts so strong and mine are so bendable? That’s a question Daniel Grandi of Racecar Jewelry Co. Inc. in Cranston, Rhode Island, has heard from numerous customers. The answer, he says, is simple.

“After soldering sterling silver ear posts onto models or finished pieces, you should instantly quench them in cold water or hot pickle to preserve tensile strength,” Grandi explains. “Most craftspeople don’t do this, and their ear posts always turn out soft.”

Grandi adds that some craftspeople who aren’t familiar with the quick quench method refuse to purchase ready-made ear posts; they make their own by twisting wire with pliers. “All the time they spend to work-harden wire and make their own ear posts could be saved by a quick quench.”

When a commercial finding isn’t quite right but making the component by hand seems like reinventing the wheel, creative modification comes into play. That’s what designer Jayne Redman of Cumberland, Maine, encountered when searching for the perfect clasp for her Palm Neckwire. 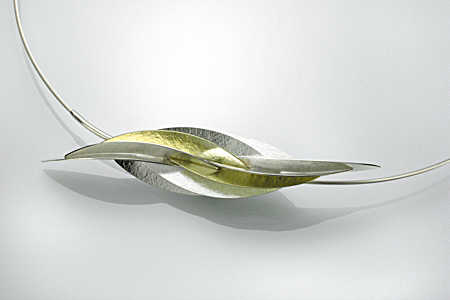 “I love the 16- and 18-inch silver coils supplied by Rio Grande [in Albuquerque, New Mexico],” says Redman, “but I don’t care for the bayonette clasps that come with them.”

Redman snips off the bayonette clasp and inserts one side of the coil into the male component of a friction tube clasp, also supplied by Rio Grande. Since the palm pendant comprises five interlocking shapes that slip onto a piece of tubing, the palm itself acts as the female end of the clasp. “The tubing on the pendant is crimped onto the other end of the coil,” says Redman. “When the coil is clasped around the neck, the closure flows into the design, creating a seamless look.”

When designer William Richey of William Richey Designs in Portland, Maine, was at the Basel show seven years ago, he picked up a few stainless steel mesh necklaces because he liked their magnetic clasps. The necklaces were in storage until two years ago, when Richey pulled them out for some inspiration.

“I wanted to create seamless clasps for some stainless steel and 18k mesh necklaces and bracelets I was working on, and these were the perfect models,” he says. 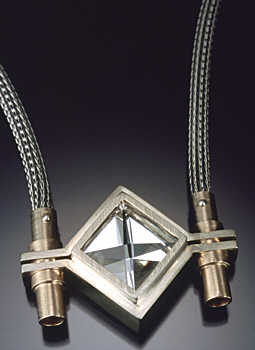 The basic clasp Richey constructed consists of two pieces of tubing that vary in diameter by about 1 mm. Richey tension-fits round magnets into the ends of the tubes, recessing the magnet in the larger tube a few millimeters. The magnets are slightly larger in diameter than the tubes, so Richey starts by tapping them in with a hammer and then presses them on his Bonny Doon press. Once the clasp is assembled, closing it is simple. “Just plug the smaller tube into the larger tube,” says Richey.

The clasps can be enhanced with additional pieces of tubing to make them more aesthetically pleasing, but the basic function remains the same.

Although designer Jayne Redman of Cumberland, Maine, makes many of her own findings, she relies on findings suppliers for certain basics, such as the tiny gold beads she uses in many of her earring, necklace, and bracelet designs. In her dealings with findings manufacturers, she’s found that even if the company doesn’t carry an item in the specific metal or size that she requires, they will often custom-make findings to suit a client’s needs.

“I use 18k gold beads in my designs, but the findings company I work with doesn’t normally stock in karats higher than 14k,” explains Redman. When asked if they could supply the beads in 18k, James A. Murphy and Son Inc. in South Attleboro, Massachusetts, obliged the designer’s special request. “Most companies are happy to make modifications for you if they do their own manufacturing. James A. Murphy makes the beads for me in two hole sizes: 1 mm diameter for chains and 20 gauge for ear wires.

“If you are looking for a particular component that your findings manufacturer does not stock, sometimes all you have to do is ask and they can accommodate your needs.”

Properly aligning a brooch pin on a jewelry piece can be difficult. If the catch isn’t perfectly parallel to the hinge, the pin will be out of whack. To get perfect alignment every time, Daniel Grandi of Racecar Jewelry Co. in Cran-ston, Rhode Island, has devised a method of attaching brooch pins that begins with the metal model.

“I start by soldering the hinge on the model in the spot desired,” says Grandi. “I mold the model that way, shoot the wax, and cast.”

Before polishing, he places the piece on his soldering bench to align the catch. To do this, he uses a nail that he has modified specifically for this job by grinding down the end to fit inside the catch. He slips the catch onto the end of the nail, applies paste solder to the piece, and sets the nail down, resting the end opposite the catch on top of the hinge. With the components in perfect alignment, he heats the catch and solders it in place.

After soldering, Grandi uses tweezers to pick up the piece, removes the nail, and dunks the piece in pickle.

Certified master bench jeweler James Cantrell of Boles Jewelry in Coffeyville, Kansas, has set many stones in the 29 years he’s been working at the bench — and in that time he’s seen commercially available settings improve in quality. “Today’s settings made with metal molds are very consistent in shape and quality,” he says. “Their shape is so much better than the old wax cast heads of years gone by.”

With such quality settings available from jewelry industry suppliers, Cantrell prefers to modify existing settings when needed to fit gemstones than to build them from scratch. “You might need a basket style head that curves in at the bottom,” says Cantrell. “Instead of making a custom head, you can use a cut-off wheel in your flex-shaft to trim the head to the desired shape. Just cut a slit in the setting, trim it up a bit on both sides, and solder it back together with hard solder.”

Another example would be to trim down an oval head to fit a stone that is narrower than common calibrated sizes. In any case, the cut-off wheel is Cantrell’s tool of choice.

“It cuts the metal without distorting it like a saw or side cutters would,” says Cantrell. “And it can also be used as a measuring tool. You can count the number of times you saw through the side of a head with the wheel so you can cut an equal amount from the opposite side.”