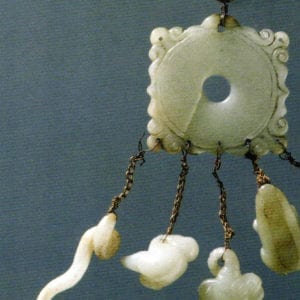 The mythical properties and symbolic potency attributed to jade (celestial stone) are stronger than those linked to almost any other stone. Whether it comes in deep green, shimmering white or enchanting violet, jade has for millennia been the focus of sustained fascination, and not simply due to its substantial value.

The Western world is gripped by a fascination with jade: Hollywood stars present precious jade creations on the red carpets, while designer labels such as Dior, Tiffany or JAR have incorporated the precious stone in their collections. Indeed, in terms of appreciation, jade can be regarded as comparable to diamonds: after all, jade is as highly regarded in Asian regions as diamonds are in the Western world. A Chinese saying reads: “Gold has a fixed value. But the value of jade is inestimable.” The most coveted, emerald green “imperial jade” especially can command dizzying prizes. It is therefore barely a surprise that in 1997, Christie’s auction house sold a collier made of imperial jade for roughly 10 million US dollars. 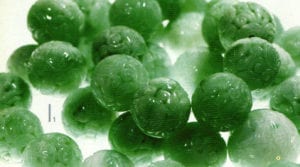 Engraved, spherical necklace made of green jade by Roland Uhl 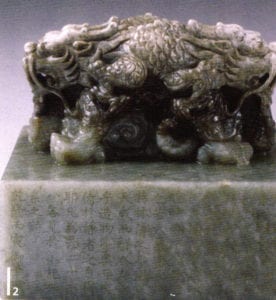 Imperial seal from the Qing Dynasty (after 1746). Museum for Eastern Asian Art in Cologne

Jade has enchanted human beings with its spectrum of color for around 7,000 years; people sought and found healing and spiritual qualities in it. As early as in prehistoric times, hunters and gatherers recognized the stones incredible toughness and resilience – ideal for the production of stone axes, blades, knives and other tools and weapons. In 3,000 BC, the Chinese honored jade as yu, the “royal gemstone”, drawing on the finest jade material to produce artistic figurines and devices. We can see just how significant jade was in their culture in the fact that the lauded philosopher Confucius (551-479 BC) addressed the topic: “Jade is soft, smooth and as sparkling as loving kindness, strong, compact and beautiful as intelligence and sharp on its edges without the cutting nature of justice.” Wisdom, fairness, compassion, humility and courage are the spiritual properties that friends of the so-called “celestial stone” still appreciate today and wear on their bodies accordingly.

The medical and healing qualities attributed to jade are derived from its name: the origins are found in the Spanish phrase “piedra de ijada”, meaning an equivalent of “the loin stone”. After all, inhabitants of South America believed that jade could heal kidney ailments. The Mayas, Toltecs, Aztecs and Omecs also believed that the stone was holy, connecting it with the god of fire, Xiuhtecuhtli. Like the Chinese, these peoples incorporated jade as an important element of the cult of death. Small slivers of jade were slipped between the lips or placed over the orifices of the corpse to stave off evil. Emperors and Empresses were even clad entirely in robes of jade. The exhibition “Treasures of the Liao (907-1125) – Chinas Forgotten Nomadic Dynasty” in the Museum for Eastern Asian Art in Cologne (1-27-2007 to 4-22-2007) shows fascinating discoveries of grave treasures. Even today, the Maoris in New Zealand attach considerable significance to jade, preserving for example the art of Hokitika, the craft of jade processing.

It was not until the first half of the 19th century that a French scientist discovered that the generic term “jade”, “yu” in Chinese, actually denoted two different minerals: nephrite and jadeite. In China, both are known as “zhen yu”, as “genuine jade”. In actual fact, however, it is difficult even for experts to distinguish between the two. The stones are comparable in terms of hardness, appearance and processing properties; they are made up of tough and dense, entwined fibers, which are also the reason for its pronounced resilience. Nephrite is found primarily in nuances of moderate green to grey-green, but is also found in white, yellowy or reddish hues. There is no doubt that the most coveted color found in jadeite jade is emerald green, caused by the presence of chromium.

However, variations in white, pink, red, black, brown or violet tones are subject to sustained fascination. In view of the fact that jadeite is even tougher and scarcer than nephrite, it is traded as the most valuable and coveted form of the stone. 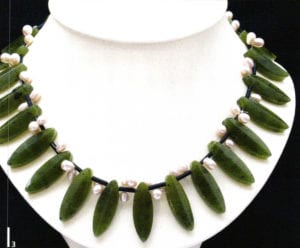 Necklace with silvers of jade and freshwater pearls by Susanne Hess 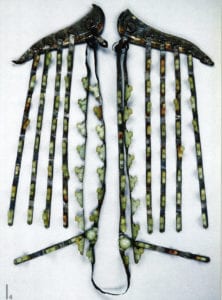 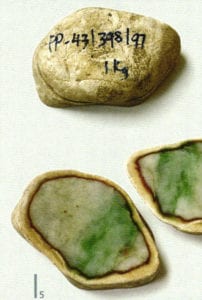 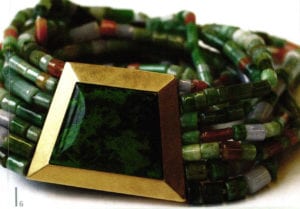 Intricate necklace by Roland Uhl; the clasp can be worn on either side: including a coral platelet or a platelet made of the rare Maw-sit-sit jade. 7 jade chains (green, lavender, brown), yellow gold 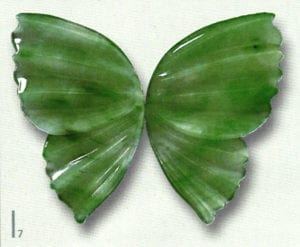 China, Russia, Guatemala and New Zealand above all are regarded as holding the most profitable deposits of high-quality nephrite. The most valuable jadeite is mined in Myanmar and then bartered annually at the “Gems, Jade and Pearls Emporium” in Rangoon. Hong Kong is another center of trade with the “celestial stone”. This is the center of trading for entire blocks of stone, polished gems, low-quality produce, antique figurines, tawdry imitations from market hawkers and precious, forged items. The price range stretches from one dollar to six-figure sums. Purchasing uncut, unprocessed lumps of stone in particular is a high-stakes game: after all, the boulders are sold whole, and only a tiny, polished window allows the experienced buyer to estimate the quality hidden on the inside. Rude awakenings are all too frequent, as the true quality is often not evident until processing starts. One wrong turn has been the ruin of significant numbers of dealers.

Jade as an artwork

China is both the traditional and current center for the art of jade cutting. Jade processing is erroneously termed as “jade carving”, as the raw mineral is actually cut and not carved. Jade is cut into artistic figurines in Canton, Peking or Hong Kong; small discs are also used to make pendants and bracelets, balls or chains. The waxy luster of nephrite and the glass-polished shine of jadeite reveal the small but significant difference between the two variations, while losing nothing of their individual fascination. The art of jade cutting is barely known in Europe. One of the few protagonists willing to face up to this challenge is the Swiss goldsmith, gemstone dealer and cutter Roland Uhl. “The problem with processing jade is less the cutting,” he explains, “it is the polishing that is difficult. The processing renders the surface uneven, and it appears to suffer from a form of cellulites. Polishing must be completed skillfully if the stone is to shine majestically. You need a lot of experience for the polishing!” And Roland Uhl can draw on that: he has been working with jade for over 30 years and is, like others also, entirely besotted with its fascination: “Jade has risen in popularity over the last few years to an incredible degree. Increasing numbers of stars above all in Hollywood wear jade. This trend has now also reached Europe. Lavender jade in particular is all the rage.” The color and its intensity, purity and transparency determine the value of the jade. The nuanced colors that jade can offer are as varied as they are fascinating: in green alone, experts make a distinction between seven different, principal qualities. But red, brown and even black jade are also found; the stains or tiny veins in some surfaces can also make the surface more interesting. The most coveted and precious jade is still so-called imperial jade, however; characterized by its transparent, translucent, evenly shining emerald green. 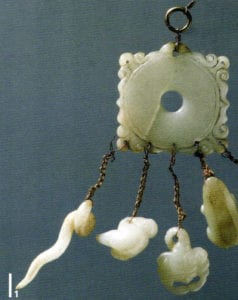 Breathtaking find in the grave of the Princess of Chen and Xiao Shaoju, approx. 1018: jade pendants with animal forms, Museum for Eastern Asian Art in Cologne.

Medallion in the form of a fish, discovered in a grave in You’aicun, Liao (916-1125), Museum for Eastern Asian Art in Cologne

In the same way that the dealer does not know when purchasing the uncut stones what may be hidden beneath the surface, it is also possible that jewelry enthusiasts may fall prey to a strikingly genuine-looking forgery. The untrained eye is scarcely capable of identifying low-quality and dyed stones or stones that have been treated otherwise; unfortunately also, they are found with increasing frequency. Whereas imperial jade is classified as “A jade”, there is also “B jade” for example, which is boiled in strong acids in order to remove contamination (e.9. iron oxide) from the cracks; these gaps are then sealed using wax or synthetic resins. “C-jade”, which is even lower value, is also dyed green. In frequent cases, entirely different minerals that come in a green and transparent form or are simply dyed are declared and sold as jade. This is why Roland Uhl advises: “You can only protect yourself against imitations if you consult a good dealer or jeweler. Apart from this, like with other gemstones also, a certificate confirms the authenticity of the stone.” 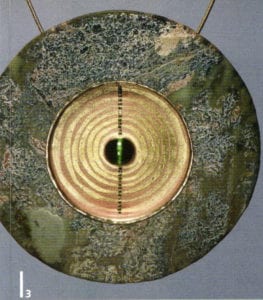 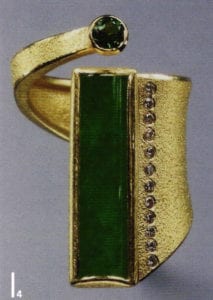 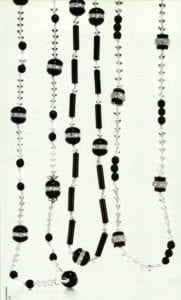 Oscar tip: necklaces made of black jade in combination with mountain crystal and diamonds by Tiffany 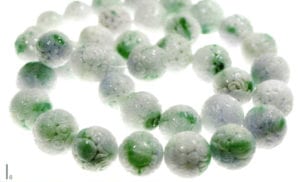 All articles by this author
Previous Porcelain: It’s in One Material
Next Anticlastic Forming Techniques
Social media