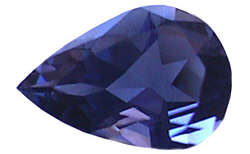 The Beauty that is Iolite

You may never have heard of the iolite gem. It isn’t a household word, but it is an attractive indigo colored gemstone. It has been called a “water sapphire”. Iolite is highly trichroic; in one direction it is totally colorless, this aspect was the origin of the water description.

The “blue denim” gemstone is another deserving description. Iolite has a color with its own personality and deserves to be considered on its own merits rather than as a substitute for sapphires or tanzanites. Iolite is often used in jewelry with other colored gemstones such as amethyst, rhodolite, and pink tourmaline.

The color of iolite ranges from a light blue-violet to a very dark blue. A medium dark blue is considered the “best” shade. Small iolites are plentiful and will fall into the low price per carat range. Larger stones (three carats or more) can fall into the moderate range if the color is good. Some stones are included; good clarity is important; avoid sleepy stones.

Iolite should be set in a mounting that provides some protection since it has a cleavage in one direction and is slightly brittle.

Iolite derives its name from Greek, “ios” meaning violet and “lithos”. The mineral cordierite was named after a French geologist, Mr. Cordier, who first studied it.

By Sondra Francis – © Gem Dealers’ Secrets – Handbook for the Gem Buyer – 1999
All rights reserved internationally. Copyright © Sondra Francis. Users have permission to download the information and share it as long as no money is made-no commercial use of this information is allowed without permission in writing from Sondra Francis.
About the Author
Sondra Francis has scoured every major colored gemstone market in the world since 1978. She was a charter member of the American Gemstone Association and served as a board member. She was a founding member of the International Colored Gemstone Association. A true gem lover, Sondra has marketed her treasures on the wholesale and retail markets.
Acknowledgments
A special thanks to Pam Dulgar, Alex Edwards, Cheryl Kremkow, Kate Kirby, Helen Mitchell, Carol Morgan Page, David Pond, Elaine Proffitt, and Ray Zajicek for their help.
Photographs: Bart Curren and ICA Gembureau ; Alex Edwards, Pearl Sales Institute ; David Dikinis
Category:
About the author