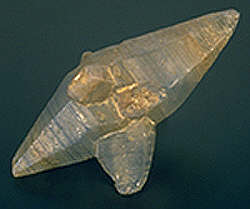 The Formation of Gem Materials

The most valuable gems come from crystallized minerals that have formed under heat and pressure deep inside the earth. The perfect order of the crystal structure is what makes gemstones transparent yet durable. Crystallization of minerals is a fairly slow process, to enable it to occur, specific geologic and chemical conditions must be met.

Depending on the conditions, the same chemical recipe will crystallize in different crystal structures. Quartz, for example is a silicon dioxide, SiO2, forms into a hexagonal crystal system. Opal has the same chemical composition but is mineralogically quite different because the opal has an amorphous non-crystalline structure. Many gems are similar in their chemistry but will differ in crystal structure. “Rocks” are less pure; they are composed of more than one mineral material in varying proportions.

Geologic formations have been occurring for millions of years on and within the earth. Below the earth’s crust are molten masses called magma. The magma is the source of raw materials for rocks and minerals: it is a soup of all the elements which form minerals. Occasionally the magma “boils over” and reaches the surface through fissures and pipes, what we see as volcanoes. When the magma reaches the surface it cools rapidly; this rapid cooling means that gemstones do not have a chance to crystallize out of the molten rock soup. But when the magma stops its progress when it is still underneath the surface of the earth, if the chemical elements are in optimum proportions many gem materials are crystallized.

The rate of cooling must be very slow. When cooling is too fast, rocks with small crystal grains develop; granite is an example of very fined grained minerals that form together into a “rock”. Granite is composed of potassium feldspars, quartz and other assorted minerals. Occasionally cooling of the submerged magma is very slow and large crystals develop. This coarse grained rock is called a pegmatite; like granite, it is composed of feldspars, quartz, but it has pockets where exotic minerals can form large perfect crystals. These are gemstones: tourmaline, topaz, beryls, spodumene are a few of the gem minerals that form in pegmatites. (Emerald in its rough state and as a faceted gemstone. Photo by ICA/Bart Curren)

Diamond is pure carbon, an abundant element. Diamonds are formed far under the earth where the heat and pressure are very intense. Under these conditions the carbon atoms line up perfectly and a diamond crystal is born. The diamond crystals are carried near the surface in pipes by volcanic action. In Africa these pipes are called kimberlites which is the bluish host rock. The Argyle Mine in Australia has pipes of another host rock, lamprolite.

When existing rocks submerged below the earth’s crust are subjected to heat and high pressure they can change and recrystallize. Erosion and weathering continually bring new mineralized material to the surface. When they are weathered and carried by streams and rivers as gravel, gemstones, which are heavy tend to concentrate in pockets; these provide gem rich gravels that are found in Sri Lanka, Burma and India. Alluvial deposits are sources of many gem materials, such as rubies and sapphires as well as gold.

Occasionally gemstones form as a fossil, when the gem mineral replaces the structure of another mineral or an organic skeletal object. These are called pseudomorphs which means false form. These are very rare gem materials but can be fascinating. Petrified wood occurs when silicon dioxide replaces the fibrous structure of an ancient tree. In rare cases, precious opal can also replace wood creating opalized wood fossils. Opalized clam shells and reptile skeletons have also been found. 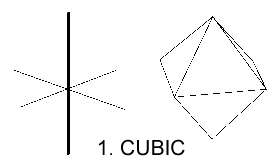 The crystal structure of a gem material determines how the gemstone absorbs light. Crystal shape may also influence the shape of a finished gemstone: most gemstones are cut to maximize the yield from the rough stone. Familiarization with crystal systems will give you more insight about why gemstones each have unique properties. Most gem materials are formed when a mineral crystallizes deep in the earth. The shape of the crystal is a function of the mineral’s chemical formula and the way the atoms are bonded together and arranged in a precise pattern. Generally transparent gemstones have been cut from a crystal. There are six basic crystal systems:

The isometric system is comprised of three equal length axes that are all at right angles to each other. This system is also called the cubic system. Think of a cube of sugar. Gemstones that crystallize in the cubic system include diamond, garnet, spinel and fluorite.

Ganoksin is sponsored by
diamond, garnet, spinel and fluorite. 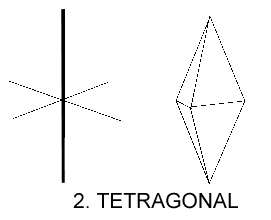 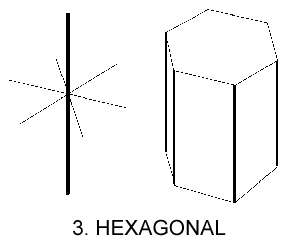 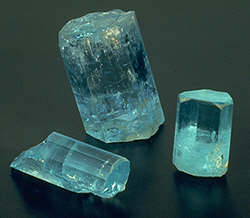 The orthorhombic system has all three axes at right angles, but all axes are a different length. Gemstones that crystallize in orthorhombic crystals include topaz, peridot, andalusite, and chrysoberyl.

Ganoksin is sponsored by
topaz, peridot, andalusite, and chrysoberyl. 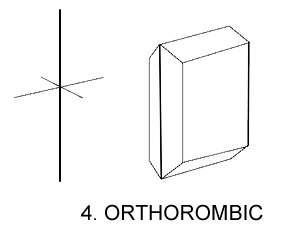 The monoclinic system has two axes at right angles and one that is not perpendicular. All axes are different lengths. Gem materials with monoclinic crystal systems include jadeite, nephrite, malachite and azurite. 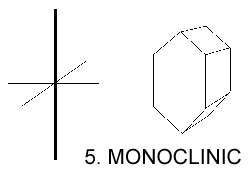 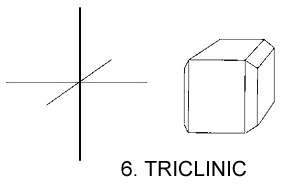 Some minerals form in clusters of microscopic crystals; these gemstones are called “cryptocrystalline”. Cryptocrystalline materials will usually be translucent to opaque rather than transparent. Chalcedony is a cryptocrystalline form of quartz; varieties of chalcedony include agates , chrysoprase, and bloodstone.

Ganoksin is sponsored by
Chalcedony is a cryptocrystalline form of quartz; varieties of chalcedony include agates , chrysoprase, and bloodstone.

Some gem materials are not crystalline but amorphous in structure; opal and obsidian are common examples. Amorphous materials have no definite internal structure.

Organic gem materials are derived from living forms or are by-products of living things. Coral is formed from the skeletal material of a small animal that forms hard structures that branch like a plant. Amber is a fossil resin of ancient pine trees that lived about 30 million years ago. Ivory is taken from the tusks of elephants or walruses. Pearls form around irritants that invade various mollusks.