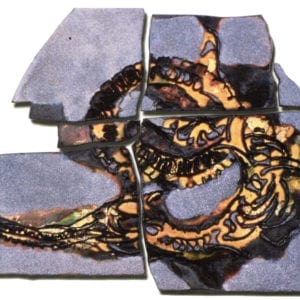 Isabella Corwin resides in Maine, only 65 feet from the ocean. Her setting influences her with it’s flotsam and jetsam. “I have a lot of imagery around me. Once in a while an image and a technique that exactly fit together comes to me. It’s a thrilling moment — it’s miraculous”, she says. The wit, creativeness and sensibilities evident in her work carry through in her dialog, regardless of media. In this article we’ll concentrate on a few daringly inventive, appealing works rather than on her successful careers in painting, fabric design and teaching plus the awards won in all. Our intent is to stimulate you, dear reader, to explore new avenues. Perhaps someone unfamiliar with the field of enameling will become inspired to join us when viewing a few photos within an article? Such is our hope.

Discussions of the topic — “fine art vs. craft” — have evolved from categories of particular fields such as painting vs. pottery to “the hand that guides the creative result”. One can copy inventions of technique but that special viewpoint of a particular fine artist is that person’s and no other’s. If there ever is a need to prove that fine art is alive and well within the field of enameling, Isabella Corwin’s work could be used as proof of such. Her explorations of space, line, color, contrast, shape and other aspects bring forth a unique work of art. Like all fine art, her style is novel; art that is difficult to imitate and which remains of interest over time. 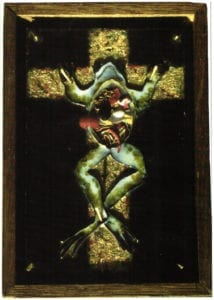 Inspired by a recent discovery in Madagascar of a live undina, Isabella created the enamel titled “Coelacanth Undina” (approx. 4″ x 10″), which portrays this prehistoric, previously believed as extinct, fish. Upon close examination, the metal base has been deeply etched, followed by an application of over fired transparent enamel using the basse taille method. Additional etching of the layers of enamel. even chiseling the glass surfaces, lends a matte, cloudy white appearance to the work. At times she has scratched the enamel to create more texture. “I see what it wants”, she says when referring to the process of discovery and change as the work evolves. 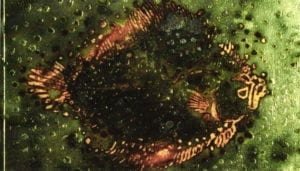 “Frog Icon” (6″ x 4″) is a startling work with an ecological message. Here both gold and copper wires are intermingled for the cloisons and lines; giving the appearance of collage. A versatile selection of lumps and thread enamels are applied over a dark green background for the open Chunks of opaque chartreuse sink into opaque whites for a spotted effect of flesh. Clever use of brass “L pins” appear to hold the work although the reality below is silicon glue for good adhesion along with a simple mahogany stripping for framing. When gluing, Isabella places an intermediary layer of lath strips between the enamel and the backing material for greater reliability. In “Frog Icon” Isabella’s work appears ancient not only due to her color choices and use of wires left dark and burned but also from the changes in enamel thickness. The enamel itself is layered, liquid, lumpy and textured. Even the background has a layer of flux for a base coat, which bubbles through to give visual texture to the black. 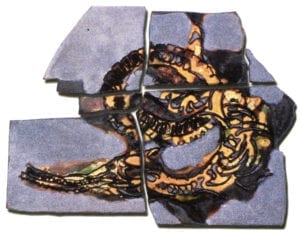 “Summer Flounder” (approx. 8 x 10″) is a work using basse-taille for the background. After drawing her design and scanning it into the computer, Isabella hand feeds PnP blue transfer paper into the Printer (Thompson Enamel catalog, page 20). Taking the printed result, she irons it onto the copper, forming a resist. Radio Shack’s Ferric Chloride is the next step for the acid etching of the plate. (See “GOM”, vol. 15, #3 Katharine Wood and Paul Silverman for further information.) Base coated with a sifted, soft flux coat followed by a transparent gray, she fired the work “nuclear style” at 1600 degrees F. to burn the thinner, raised areas. The next step was to grind the enameled areas deeply, exposing the copper, after which she reapplied additional soft flux, again firing high and preserving the underlying glaze of red firescale in selected sealed areas. 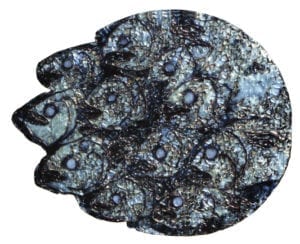 “Dragon Fossil” (6″ x 8″) is a work consisting of six asymmetrical metal shapes. The image of a fossil  arries across the pieces, appearing to be a fish trapped in stone. The effects of high firing first coats of transparent enamels followed by low firing a last coat of a mixture of opaques creates the appearance of the stone. Isabella says “I had a lot of fun finding my way!” This work is mounted on wood blocks. “Fossil Fish”, (visible in “The Art of Fine Enameling” by Karen L. Cohen, available via Thompson’s) is also a multi-piece enamel. The high firing mixes of opaque, opalescent and transparent gives the right effect. 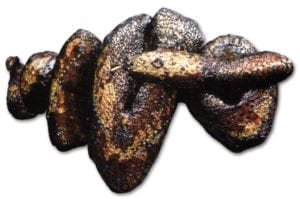 Other works, “Blue Plate Special” (7″ x 9″) and “Gossip” use wire underneath silver leaf. Unlike Alana Clearlake’s sculpted use of wire mesh, Isabella attaches the wires/mesh to the work using enamel, then fires silver leaf on top followed by further wire work in the form of cloisons. Subtle shading with the use of many transparent blues follows. The cut outlines of the fish in “Blue Plate Special” are of special interest in the union of humor, interesting shapes and true to life observations.

When asked what interests her most recently, Isabella said that she is “moving into dimensional” art. “Boa” (8″ x12″), a work of seven, shaped copper sheets, was without counter enamel in it’s early stages. The ensuing distortions add to the sculptural aspects guided the artist towards the finished piece.

“I really want the enamels to sing”, says Isabella. We think her song’s quite wonderful.