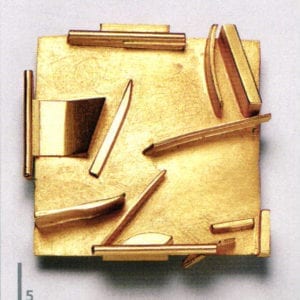 Professor Hermann Jünger, one of the most defining personalities in goldsmith art over the second half of the last century, passed away on February 6, 2005, aged 76 following a long illness. Jünger was among the key figures who influenced the development of modern jewelry design and who played a defining role in the strong impulses that Germany provided in this context. In the five decades of his work, he revolutionized contemporary jewelry design as one of the most influential goldsmiths. 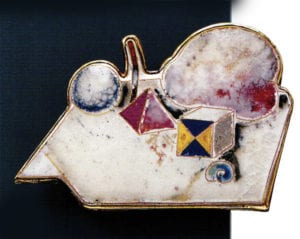 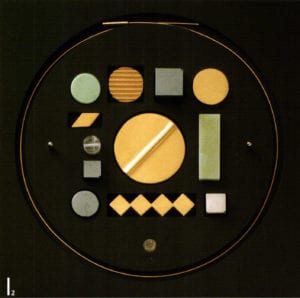 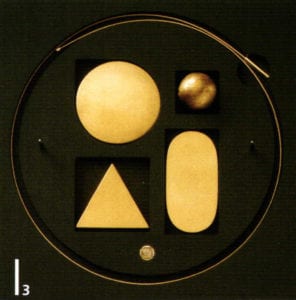 Hermann Jünger, born 1928 in Hanau, first started work in the atelier owned by the Bauhaus designer Wilhelm Wagenfeld with the WMF in Geislingen after studying at the Drawing Academy in his home town He then continued his studies at the Academy of Fine Arts in Munich under Franz Rickert. This renowned institution was established after the Second World War and has since risen to become one of the most internationally respected chairs for jewelry designers. Its first director, Franz Rickert (1946-1972), was an artist with a very clear focus on crafts. It is to his honor that he provided encouragement to break with traditional perceptions and to set off on new and independent paths.

This fell on arable land as far as Jünger is concerned. This was where his conviction matured that design is a significantly more complicated affair than simply creating something with perfect technology. Jünger benefited from the freedom that Rickert afforded his students to be responsible for their own ideas and to learn and experience personal development through detours and experiments. As early as 1958, Jünger represented the Federal Republic of Germany at the World Fair in Brussels with his jewelry.

In the period in which he held the Chair of Gold and Silversmith Art at the Academy of Fine Arts (1972-1990) as successor to Rickert, Hermann Jünger transformed Munich into a center of European goldsmith art with global charisma as a result of his own work and his international students. He soon rose to fame in the international jewelry scene. His work is now found in museums in Australia, Prague, London, New York, the Pforzheim Jewelry Museum and the Pinakothek of Modern Art in Munich, among others. In addition, the artist supported and promoted the growth in the jewelry collection owned by the Danner Foundation. Cooperating with his successor at the academy, Professor Otto Kunzli, he also designed as guest curator the first exhibition in the Rotunda in the Pinakothek of Modern Art. 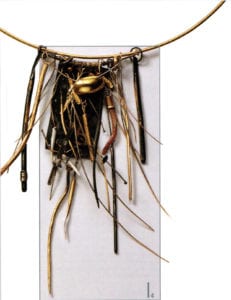 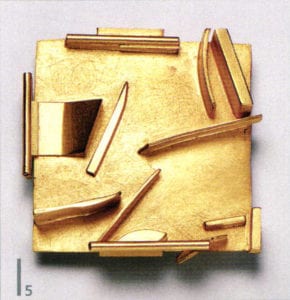 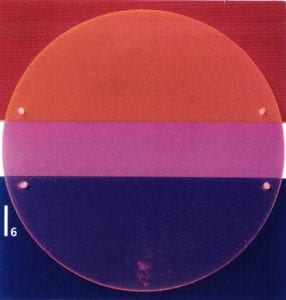 Jünger; a talented metal designer with vast professional experience, demanded of young goldsmiths the highest standards of crafts skill and also, at the same time, significant aesthetic creativeness. Former students are now successful in Europe, Australia and America. Jünger based his work on line drawings and watercolors. Their lightness and oscillation are mirrored in the metalwork. It was Jünger’s conviction that the drawings were important to discover new ideas and for the introduction of spontaneity. Concentrating the creative journey on the production of the jewelry itself alone was a problematic aspect in his view.

His eye for the special qualities helped him discover the beauty in the weathered surface of wood or stone, but also in the forms of discarded pieces of plastic and other mundane objects. His imagination and craftsmanship transforms broken switches or circuit boards into brooches adorned with gemstones, or a bent piece of scrap suddenly becomes a golden shimmering necklace.

Jünger always emphasized himself that his artistic development was influenced significantly by the German painter Julius Bissier, whose flowing, almost oriental compositions are clearly reminiscent of Jünger’s intentions. The mainstays of Bauhaus design merge in his work to form a unique interaction: the principle of stripping everything down to the bare essentials, while still installing playful elements, aspects one finds in the painting by Paul Klee also. Jünger was almost unique in his ability to handle surfaces, color and three-dimensional work in a playful style. His compositions often appeared almost as if they were coincidental and merged. Numerous amorphous forms and a wide spectrum of color nuances are combined here as if taken for granted, which requires a high degree of skill. 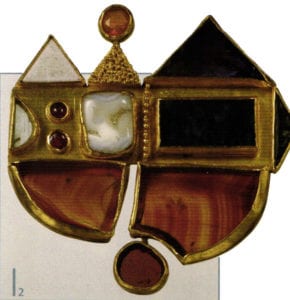 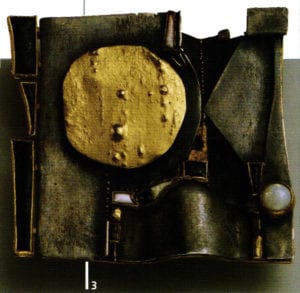 Classical materials such as gold, gemstones or enamel in connection with apparently simple technology are the criteria by which Jünger redefined goldsmith art. He also plays with fragments such as text passages, shards or ruins that preserve in themselves the memory of the whole. In this context, the composition is so balanced and perfect that, as defined by the philosopher Aristotle, nothing could be added or taken away without destroying the unity.

Many jewelry artists have learned from Jünger’s work and followed in his footsteps. These include very different temperaments such as his successor in Munich, Otto Künzli, or Daniel Kruger and Ulla Mayer. His individual exhibitions in Germany, the United States, Austria and Japan have contributed to his global influence, as has his participation in group exhibitions, which meant that his work became known in Switzerland, Australia, Brazil, Scotland and the Netherlands, to name just the most important stations. As testimony to his exceptional artistic contribution as a goldsmith and his exemplary efforts in the education of young designers, he was awarded the Golden Ring of Goldsmith Art, which has been given to 37 internationally renowned artists since 1932.

Pioneer of the modern age

Jewelry is now among the most complex and lively artistic forms of contemporary expression. The foundation for this was laid in the sixties, when goldsmiths started to draw on a language of forms that had until then entirely contradicted previous crafts traditions. In a dialog with art and design, kinetics, informality, tachism, abstraction and pop art provided decisive impulses to design jewelry with artistic aspects. This also led to the use of other materials such as glass, plastic or stainless steel as a means of expression. The start of this story features names such as Friedrich Becker (1922-1997), Hermann Jünger (1928-2005), Reinhold Reiling (1922-1983) and Klaus Ulrich (1927-1998). They founded schools and influenced generations of goldsmiths all over the world. Separate from the Western world, an arable base for young jewelry designers blossomed in Giebichenstein Castle in the former German Democratic Republic (Academy of Art and Design). Under Dorothea Prühl (*1937), the institute created a language of forms that, based on concrete, figurative expression, merged into lavish, abstract jewelry structures. GZ Art + Design will report on these pioneers of contemporary jewelry design in an irregular series.

All articles by this author
Previous Worn Symbols: The Varied Forms of Body Jewelry
Next Easter Parade 2006 at the Keukenhof
Social media