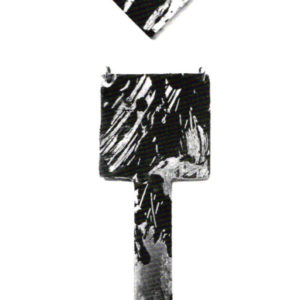 Complex simplicity jewelry for Hermann Jünger has always been an art of certain scale. The term miniature, I believe, is overused and inaccurate, since, in fact, jewelry art is created in visual proportions that correspond to the artistic idea. As Jünger would say, “ein Zehntel,” or tenth of a millimeter — this exacting refinement that affords no translation in scale can significantly alter the way an artist proceeds from his initial esthetic proposition.

Over the last 40 years, Jünger has remained true to this principle, as he transforms his two-dimensional drawings and paintings into three-dimensional metal forms. From his earlier necklaces onwards, he has followed a visual unity in his work, employing collage or collected forms with the barest interruption of technical necessity. Light, kinetic, visually refined, tactile forms operate in the most reduced context as the metalwork seems to flow effortlessly from the ideas in the drawings.

Jünger’s adventure is in drawing. His exploration and intellectualism is in calligraphic notation. In the transformation from drawing to metalwork, he is not constrained. There is the confidence that comes from decades of refining one’s thoughts. Jünger’s entire body of work is a continuum of design and art in a marriage of personal statement and technology. Specifically, in his latest exhibit at Jewelers’werk Galerie, he has achieved a purity of expression in his Schmuckkasten Series. These extraordinary pieces, composites of his pendant series, are minimalist in the Rothko manner, ever seeking to eliminate the extraneous or distracting. In Jünger’s case, they are personal explorations of common forms that he metamorphoses into specific shapes and exact proportions that become his alone. 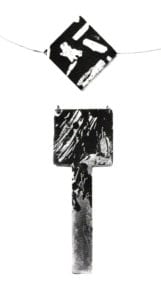 In his jewelry, Jünger invests a simplicity or universality intended to facilitate the jewelry’s visual fusion with the wearer. The jewelry is intended to become integral with the individual’s persona. What it says is both simple and complex. One’s initial reaction might be, “Oh, that’s a familiar form.” However, closer observation reveals complexity and sophistication.

Just as a painter or poet would not detach or excerpt an isolated portion of a work, Jünger considers the body his format. His jewelry is concerned with a point on the whole. A place, a size, a color, a form are all considered reflective personal signs. His intention is in opposition to a vast number of contemporary metal artists. Most frequently, in the frenzy to prove: 1) artistic merit, 2) artistic signature, 3) settle art v. craft confrontations, 4) innovation, metal artists create huge, technological, pictorial essays and call them jewelry or body ornament. For the most part, they can only be worn like the crown jewels, briefly, uncomfortably and conspicuously. On the other hand,

Jünger’s most recent jewelry, when worn, becomes part of the wearer, a statement that integrates. It does not have so much to say that it overwhelms the eye. His work coordinates powerfully in the proportions of the golden mean, in which his is the accent. Jünger’s jewelry is a point on the body, as Jünger says, “the dot on the ‘i’,” a necessary part of every day. 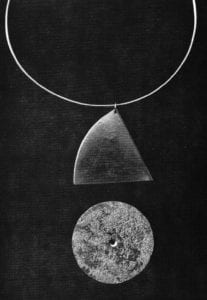 Although Jünger is not essentially interested in the technical part of goldsmithing, his achievements would not have been as easily realized without the ability and interest in solving the technical problems that would otherwise interfere with his esthetic principles. For instance, in his previous pendant series, the connecting jump-ring was a necessary to tie the neckwire and the pendant together. With the application of the new Niessing wire “thread,” the strength and size of the “thread” enables Jünger to eliminate the distracting connection. The “thread” passes through the hole in his pendant beads. Ingeniously, his spring-loaded tube clasp solves the problem of inserting the “beads” over the clasp, because the diameter of the clasp is so reduced.

Visually, it is purified. The “thread” allows him to group his collection of related forms in a presentation box. The various sophisticated shapes, natural stones and colors of metal are grouped in a matte black container. The idea of this container was influenced by Japanese packaging, where all components come together into one idea. The box configures the work when not worn or when part is worn. Its composition is fine, particle-resin board that has been machine-routed by computer program. It is a marvelous industrial contrast to the precious parts it houses.

The whole is a graphic display pushing up through the third dimension. Each piece is assigned as the whole is considered. Jünger feels that the Schmuckkasten Series opens up new esthetic possibilities. He sees in each millimeter a new road to explore.

Gretchen Raber is a goldsmith and designer/manufacturer of architectural metalwork in Alexandria, VA.