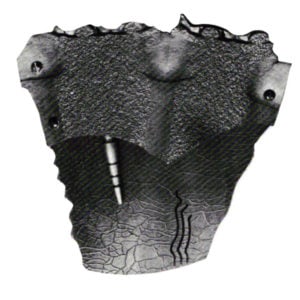 In late 1981, I began working with anodized aluminum, drawn to its light weight, availability and low cost. In developing a simple studio “facility” for anodizing aluminum, I focused on experimenting with both color applications and surface effects on the metal. At that time, few people were looking into alternative surface effects, most taking a straightforward approach to surface treatment and the application of dye colors. I enjoyed “playing around” with the material, and the number of sample pieces grew as I began trying to push the processes to creative limits.

During this period I began to wonder why aluminum would not take on torch or heat textures similar to that of “reticulated” silver and nickel silver alloys. After several attempts with the torch. I concluded that no such textures would appear on untreated aluminum and went on to other things. In late 1984, I again became interested and took a new tack by asking myself, “Why does silver reticulate?” As information about silver reticulation had been published widely, I knew the presence of a layer of cupric oxide was critical to the occurrence of the reticulated surface on silver alloys.

A review of the aluminum anodizing process provided the clues. During this process the surface of the metal is electrochemical oxidized to develop a porous layer of aluminum oxide that will absorb dye. With this insight I applied the torch to a piece of anodized scrap and a texture appeared. It wasn’t the classic “reticulation” texture but one of web or netlike veins running in all directions, like a bullet hole through a windshield. It was obvious then that the oxide layer was the critical component. Since that time I have used this technique often, with both torch and kiln, on all types of aluminum, mostly scrap of unknown alloy composition and thicknesses, ranging from foil to heavy plate. The web textures always develop.

The actual application is simple. Just prepare the aluminum as you would to color. Generally I place the piece in the anodizing bath for 10 to 20 minutes and rinse. I use a small acetylene torch to heat the metal. Lacking proper measuring devices, I cannot say at what temperature the webs begin to appear. However, it is sufficiently below the melting point so that melting or puddling is not a problem—you are less likely to burn a hole through aluminum than silver.

A general, overall heating is not necessary. Simply start at one end, holding the torch tip over an area until the web begins to appear, and slowly advance the flame. Webs will grow behind or around the flame as it moves. After the texture occurs, the piece can be colored by conventional means.

In order to develop a more “scientific” understanding of the process, I submitted samples to Professor John Verhoeven, Senior Metallurgist, Ames Laboratory, Iowa State University. The samples were 3003 aluminum alloy, .102″ thick, anodized for approximately 15 minutes at 12 to 15 volts in a solution of 15% sulfuric acid. Samples were dyed dark blue. Thin cross sections were cut off, secured in a mounting compound, polished and photographed through a 250-power microscopic lens to reveal the nature of the aluminum material (see illustration).

Based on an examination of the samples, the following concept was developed. The coefficient of thermal expansion of aluminum oxide is less than that of aluminum. Upon heating, the aluminum will expand more rapidly than the oxide layer developed by the anodizing treatment. This causes the surface oxide layer to be pulled into tension. The oxide film breaks along the lines perpendicular to the direction of maximum expansion. At the point where the oxide layer fractures, fresh aluminum is exposed. It oxidizes immediately, but its freshly oxidized area will be thinner than the surrounding electrochemical anodized oxide layer. It will also be colorless.

Upon cooling, the aluminum inner structure will shrink more than the oxide layer and this will cause the oxide layer to compress. Because the oxide layer is much thinner along the cracked lines, the layer will be much weaker also. In areas away from the cracks, the thick oxide layer will exert a stronger restraint on the inner aluminum during cooling than right at the cracked regions where the oxide is quite thin. In the cracked region the restraining force of the oxide is weaker and the inner aluminum structure bulges outward, possibly producing further cracking in thin layers along the previously cracked locations. In cross section, the tips of the protrusions have a jagged appearance similar to that of a volcano crater, and this is typical of all samples examined and provides evidence for the above explanation.

Since the textured pattern is associated with the oxidized area on the aluminum, control can be applied to create patterns or textures. The microscopically enlarged illustration shows the effect of blocking the pattern with soldering flux. Alternately, the oxidized area may be abraded away. One of the best ways to do this is by sandblasting.

Chuck Evans is a professor of jewelry and metalsmithing at Iowa State University. A distinguished member of the Society of North American Goldsmiths, he has exhibited his work extensively and is author of Jewelry: Contemporary Design and Technique.

All articles by this author
Previous Projects of Exploration: The Art and Science of Line
Next 1987 SNAG Conference Review
Social media