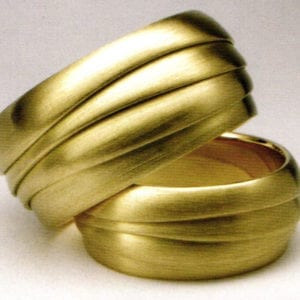 Whether in ancient Greece or in China, in Peru or India, gold has not only been appreciated due to its beauty and value, but also because of its warmth, sensuality and its spiritual wealth. In addition to its fascinating color and natural appearance, these are the most important characteristics that the precious metal gold and the sun have in common. 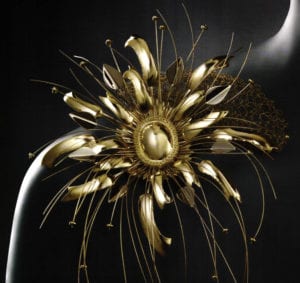 A combination of fleshy, water-conserving plants and tough shrubs inspired Eulalia Masonganye to her brooch, with which she took part in the Anglo Gold Ashanti competition in 2006 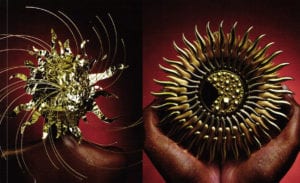 In 2004, the South African Leigh Clark (left) and his countrywoman Sarah Preston (right) were among the winners of the competition organized by AngloGold with their fantastic jewelry. The competition has been re-branded under the name AuDITIONS and is now a global brand 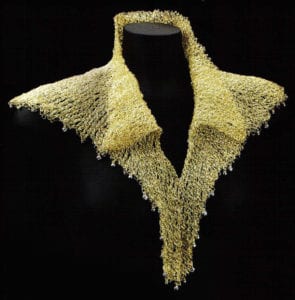 The most important characteristic of Orlando Orlandini’s collections is the luminosity obtained by the meticulous labor of hand forming, giving the gold a gemlike quality, capturing and reflecting light from its many small surfaces. It won the title “Best Gold Design” at the Couture-Design Award 2001 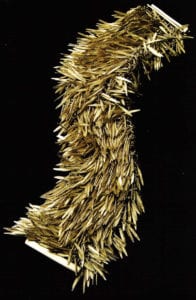 Gold has been inseparably linked with the sun throughout history. Often described as sunshine you can touch, gold has been revered in almost every culture as the very essence of the sun. Today our need for the sun’s warmth is reflected in our desire for the sensual glow of gold. Beautiful, desirable and incorruptible it has been a constant source of inspiration for countless civilizations, a continuous thread connecting worlds to worlds and generations to generations. Gold connects us to our emotions. The relevance of gold in our lives goes beyond fashion, adornment or purely material value to provoke in us profound and powerful emotions such as passion and joy. Often paradoxical, sometimes extreme, our emotions are what make us feel alive. All of these aspects of gold inspire designers throughout the world. They provide the context for the creative work by goldsmiths and support them in developing convincing and innovative jewelry using the precious metal. 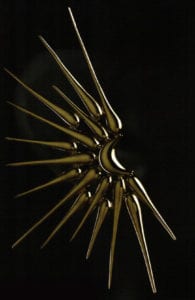 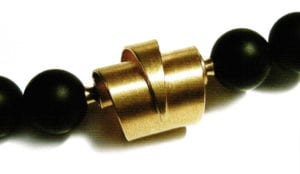 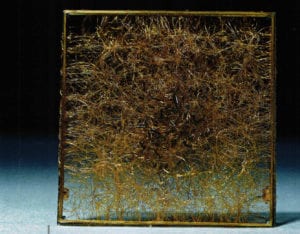 Giovanni Corvaja explores the effects of transparency within pieces composed of gold lamellae flanked and delimited by a square structure. Brooch, yellow gold and palladium

From the first discoveries of gold in ancient times, its beauty and the ease with which it could be worked inspired craftsmen to create it into ornaments, not just for adornment, but as symbols of wealth and power. The skills of the goldsmith from ancient Egypt to Benvenuto Cellini or Carl Faberge still amaze us.

Gold is made up of just one stable isotope and is therefore one of the 21 pure elements. The heavy metal is as soft as tin and possesses a remarkable color. In general, it is not attacked by acids; in nature, gold is found as a pure mineral. It has a saturated, yellow color.

Deposits: The deposits are spread across the entire globe; today, around 40 percent of the mined gold comes from the United States, South Africa and Australia. According to the United States Geological Survey (USGS), the global gold mine production in 2004 was 79 million ounces (2,240 tons). It is now even profitable to mine rock that only contains one gram of gold per ton.

Chain “meter-wise” by Dorothea Brill: Countless rings are used to form a necklace that feeds on its glittering and sparkling in a very simple manner. Simplicity and mysterious interplay between the rings are united in the draped and very flexible chain

The bracelets made of extremely thin, brushed gold by Claudia Hoppe may have a peaceful charisma due to the classical form and the material, but they do have a surprise up their sleeves when used

The inimitable language of forms used by Henriette and Martin Tomasi: one of the receptacles which have received many awards made of stainless steel thread and fine gold, felt, sewn, forged, cold welded and stabilized

Alloys: The proportion of gold in jewelry is measured on the karat scale. The word karat comes from the carob seed, which was originally used to balance scales in Oriental bazaars. Pure gold is designated 24 karat, which compares with the “fineness” by which bar gold is defined. Additions of copper lend gold a pink or reddish appearance, lower the melting temperatures and also make it harder, stronger and easier to polish significantly. Rising silver contents change the color of the pure gold, ranging from light yellow to light green and finally white; the melting temperature and the hardness barely change in this process. Conversely, most metals, also the known platinum metals, mercury and the iron metals as additives lead, as their quantities rise, to dilution of color in the form of a dirty yellow-gray to gray-white alloy. In addition, they contribute to a significantly higher hardness and strength.

The most widely used alloys for jewelry in Europe are 18 and 14 karat, although 9 karat is popular in Britain. Portugal has a unique designation of 19.2 karats. In the United States 14 karat predominates, with some 10 karat. In the Middle East, India and South East Asia, jewelry is traditionally 22 karat (sometimes even 23 karat). In China, Hong Kong and some other parts of Asia, “chuk kam” or pure gold jewelry of 990 fineness (almost 24 karat) is popular.

Finishes: Various textures are used by designers in order to add intrigue and enhance the desire of the piece: 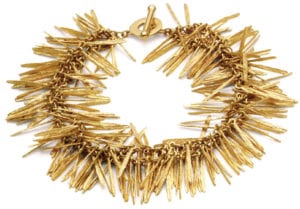 Filigree: Rosemary bracelets in two sizes made of yellow gold by Roberto Coin 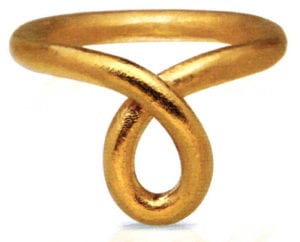 “Loop”: Drawing on a small stroke of genius, the German industrial designer Axel Kufus places grace and archaic appearance of gold in the focus of his design. A simple bend creates a ring in a loop form, the symbol for eternity 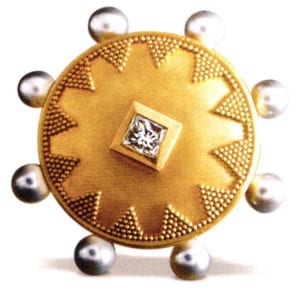 The combination of the sun form, the granulation technique and the pearls arranged in the form of beams makes Pura Ferreiro’s ear clip into a truly summer item of jewelry 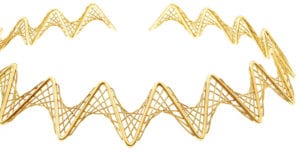 The jewelry collection “Spike” by the industrial designer Tom Dixon is made of a fine, golden net structure. The collection, with its architectural inspiration, consists of a necklace and bracelet and a matching ring

Although these days gold is in danger of becoming a run of the mill mass product, there is still a wealth of impressive work by contemporary designers who approach the precious metal in an equally prudent and experimental manner. Numerous design competitions for gold jewelry are held each year round the world. The global gold company AngloGold Ashanti for example believes that promoting excellence in the design of gold jewelry is an important element in ensuring the continuing attractiveness and appeal of the metal among consumers. Their design competition “AuDITIONS” is sponsored in different parts of the world and is seen as an effective way of encouraging professional and amateur jewelers to work in high karat gold, experiment with new styles and techniques and improve the design and styling of gold jewelry. The award-winning items serve to demonstrate not just the beauty of gold, but new and exciting designs come to the attention of trendsetters and fashion leaders who set and drive fashion trends. 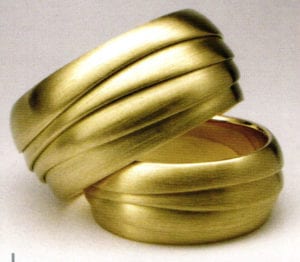 The satinated surface processing and the forms mean that the jewelry by Vincent van Hees from Holland appears almost like soft, folded cloth

www.kiltamuseo.fi (the world’s only international museum that focuses on the past and present of gold panning culture is found in Tankavaara, Finland. The 30th Gold Panning World Championships will be organized in Tankavaara, Northern Finland, in August 2006.)