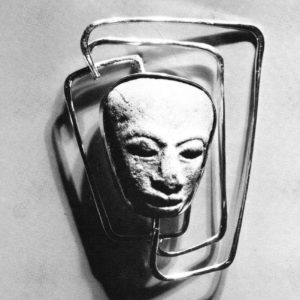 Having turned 80 with the spring this year, Fridl Blumenthal qualifies as a grand old lady of metalwork. Like grande dames from time immemorial, she has a powerful predilection for gold. For her, however, gold is not something with which to purchase the perquisites of grande dametude. For her, gold is something to work, and work it she does, with all the tools of her trade, almost every day when at home, as faithfully as she swims her mile.

The attractions of gold are familiar to every metalsmith. One of the earliest metals to appear in human history, it combines the slightly contradictory qualities of extreme durability with relative ease of working. Gold can be melted and cast, drawn out into wire, hammered into ultra-thin leaf, cut, burned and granulated. The beautiful metal responds to any method and has been doing so for at least the 5,000 years we know about, in every civilization that we know anything about at all and some that we don’t know much about, except their use of gold. 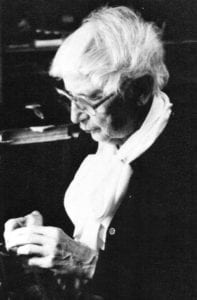 In spite of those charms and values, gold has gone out of fashion among many, even most, art metalworkers today. The steeply rising cost over the last decades has certainly been one factor, but another no less certainly has been the age’s restless drive to experiment in all the arts, to do things never done before, to be new at all costs. In metalwork for some time now, that has translated as collages, derived ultimately from Picasso and Braque in the early years of the century and the use of metals formerly rejected by jewelers as “base” in both senses.

Fridl Blumenthal will have none of it. For her, the base metals remain base simply because nothing responds to the artist’s touch as beautifully and in as many ways as gold does. Against the grain of her time, she works in gold, accenting it sometimes with precious and semiprecious stone, including diamonds as desired.

The shaping circumstances of her early years have been all too common in our century and are implicit in two fundamental facts: she was born and brought up in Berlin; and she is Jewish.

As a child she was always clever with her hands, loved visiting the then world class Berlin Zoo and modeling the animals in plasticene. She studied briefly with a young Berlin sculptor, Peter Fingestein, now an art historian, esthetician and head of the art and music department at Pace College, New York, as well as a multi-media artist. 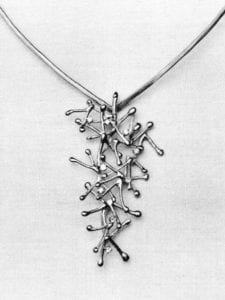 At one point her mother obtained an introduction to a locally famous craftswoman who agreed that young Fridl’s work showed great promise, but added, finally, “Look, I am very well known in Berlin, everyone likes my work and I can’t make a living at it. Why should you start out on such a career? Do something sensible.”

Something sensible, as often, was a commercial school, whence she graduated into banking, developing a taste and a talent for international finance, the moving of money from nation to nation, the subtleties of foreign exchange.

Then two things happened. First she married her sweetheart of 10 years, Bernhard Blumenthal, a young metallurgical scholar with a fellowship at the prestigious Kaiser Wilhelm Institute. Second, Hitler arrived in power and Bernhard’s fellowship vanished overnight. The newlyweds knew they had to leave Germany. The bureaucratic rigamarole outlined in Menotti’s The Consul was played out at the American embassy, but eventually they got the necessary visa and arrived in the U.S. in 1937, where Bernhard had a job awaiting him with American Smelting and Refining, first in Pittsburgh, then at the laboratory in New Jersey. They discovered that a European degree was worth about half an American one. With two small sons to care for, Fridl began looking for some sort of work she could do at home. 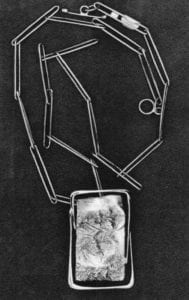 She found it, but not until after another move. Bernhard’s work attracted the attention of the people organizing the Argonne Laboratory nuclear projects and he went there to help develop the transmutation of uranium into plutonium. The family moved into a highly experimental new community, Park Forest, where Fridl became secretary of the school board: “Nowhere else,” she says, “could we have become Americans so fast.”

She became a practicing metalworker even faster. Bernhard read a review of a book about wire jewelry and saw at once that was what Fridl wanted: “Get yourself some wire and an inexpensive pliers,” he urged, and she did.

From snipping and joining copper wire, she progressed swiftly to silver, learning a lot from a Chicago silversmith, Anna Halasi, who worked in her kitchen, rather less from classes at the Art Institute. And of course, at every point, Bernhard, a top ranking metallurgist, was a great help. From the beginning, she wanted her work to be “both timeless and modern.” The most cursory review of her work shows that from the beginning she succeeded. 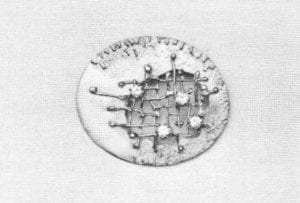 She also succeeded commercially in short order. One day in 1948, she walked into Georg Jensen and walked out with a contract for future work. She got the same sort of treatment at Cooper in Philadelphia and Marshall Field in Chicago. These three kept her busy.

Too busy. As a successful silversmith selling to top retail firms, she found that it took all the running she could do to stay in the same place, just keeping up with orders. After a decade of this, she figured out a solution and the opportunity presented itself to pursue it.

The solution was gold. Besides the inherent properties of the queen of metals, the attraction for Blumenthal was simply that the price of gold was so high that the jeweler’s reasonable added percentage was sufficient for her to slow down, spend more time developing each piece and, for that matter, spend some time not overtly working at all, that time for hidden growth, essential to any artist.

The opportunity was provided by her husband, who was invited to Belgium for two-and-a-half-years to set up a plutonium laboratory for the government. The Belgians gave Fridl space and a workbench and that was all she needed. Much more important, the provincial town of Mol, where the plutonium laboratory was being established, was handy to Düsseldorf in Germany, the home of a craftsman Fridl regarded as an outstanding goldsmith and teacher of the art Friedrich Becker. She obtained a special-student status at his school in that ancient metalworking city. In two sessions of two weeks each, working in between at her bench in Mol, she got the training she needed to go on the gold standard. 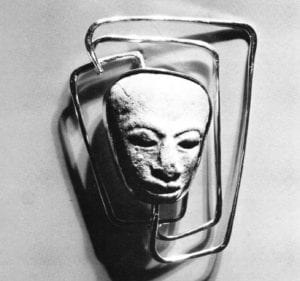 With one exception, she tends toward small stones, especially diamonds, using them as Renaissance jewelers did to be focal points and to set off the ingenuity of the design, rather than, as in all too many 19th– and 20th-century examples, simply to announce loudly the owner’s wealth in the sheer size of the rock. The exception is those stones that have interior patterns of interest in themselves, notably agate, quartz and amethyst. She gets these, in lumps or slices, from a third-generation German stonecutter, Bernd Munsteiner. Through a process of his own devising, he can reveal within a slice of agate successive ultrathin strata that suggest river banks or a topographical map. “When I work with stones, the stone tells me what to do with it,” she says.

She has always liked making chains and designs them in endless variations. She believes in variations, for that, matter, and will almost automatically rework a design that pleases her from brooch to earrings to necklace to bracelet.

The same thing happens when, on rare occasions, she designs a setting for a small stone head, pre-Columbian or Egyptian, perhaps, in origin. She has looked to similar sources as inspiration, never copying or reproducing, but welcoming the influence of Polynesian forms, for example, which predominated in her early work in silver. The forms of nature have also been a constant source. 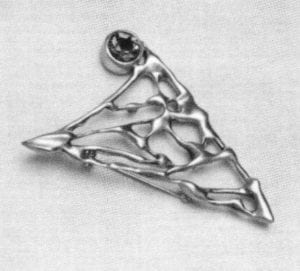 Most of her work is small-scale sculpture, as well as jewelry of never-failing visual interest. Once the eye adjusts to the scale, you look at a Blumenthal ring, for example, exactly as you look at a piece of sculpture. It exists in three dimensions and the eye explores them all as the spirit responds to the adventure of form and texture. The American sculptor who comes to mind when you contemplate Blumenthal’s work is Seymour Lipton, who makes very large pieces, completely abstract yet mysteriously evocative of ritual and myth, with surfaces covered with highly textured accretions. Blumenthal’s pieces are similarly evocative, but what makes the comparison unavoidable is the paradoxical combination of great delicacy and great strength. The two are not easy to keep together in balance, yet Blumenthal does this in everything.

In a ring with an amethyst crystal, that stone is so cut as to seem to be offered up by the surrounding gold, a delicate gesture in the midst of the rough cut of the stone, rough cast of the gold. The same gesture of offering in a ring with a totally different look poises a pearl on the end of a coil of thick, textured gold, making an almost 17th-century gesture of deference with the least likely of glittering surfaces.

Ganoksin is sponsored by
th-century gesture of deference with the least likely of glittering surfaces.

In short, her work expresses in jewelry or small sculpture that guiding principle in diplomacy, indeed in all forms of governance, too often not observed in its entirety, Sauviter in, modo, fortitur in re, strong in substance, graceful in manner.

All articles by this author
Previous The Search for Modernist Style Jewelry
Next Metalsmith ’85 Summer: Exhibition Reviews
Social media