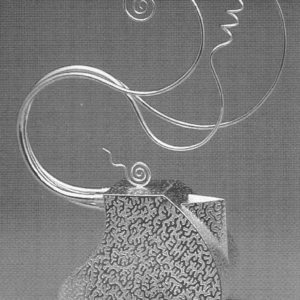 For your European correspondent it was Christmas in Brighton and then New Years in Paris – which is not the worst way to see in the New Year. Having Purchased several bottles of French champagne – at a special price of 49 francs a bottle (yes, that’s $2.50 to you!). I settled down to poached salmon with fumet de poisson, fresh wild mushrooms, puree of Chinese artichokes, sweet potato and carrot, very good company and floated into 1994. Hours into the New Year and I had my first bout of guilt – the copy for this piece was due on the 1st of January. And so another year begins…

Over on this side of the Atlantic we academics enter into Spring term with our students, hoping to motivate them through the winter months and especially to raise them above the dreaded international phenomenon of February blues.

The dozen or so of you who read my last Notebook – I know some must have because I was contacted by an American colleague, Bob Griffiths, with whom professional and personal contact was made of a mutually beneficial nature – will know about the British Artist Blacksmith’s Association. This organization collaboration with an as yet unnamed sponsor is organizing a major touring exhibition to be held in 1995 called Fe: An Exploration of Iron through the Senses. It is planned to tour this exhibition for two years through the U.K. and then Europe with venues still to be announced. It will open at the Kelvingrove Art Gallery and Museum in Glashow and will be accompanied by an illustrated catalogue. Of particular interest to all those smiths reading this is that it is an international competition and open to anyone – you do not have to be a member of the organization. 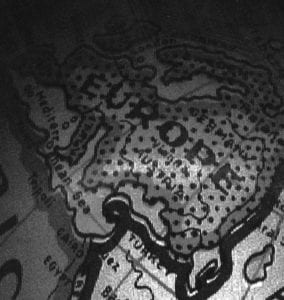 Fe will be a survey of current work, intended to be an update of sorts of the notable New Iron Age exhibition which was held at the Victoria and Albert Museum in 1980. There is a brief for this exhibition which asks for pieces which address the aural, tactile or olfactory nature of the material. Pieces for submission could address weight, balance, ease of movement, shape, texture, temperature; and pieces may be pushed, turned, sat upon, opened, closed, assembled and disassembled, etceteras. They maybe struck and sounded or plucked, twanged, eceteras. The brief is very broad and interesting. Further information about deadlines, registration, venues, requirements, and the rest may be obtained by contacting Shona Johnson; 115 Main Street; Ratho, Newbridge, Lothian; Scotland; EH28 8RS; United Kingdom. The telephone number is 031.333.1824 (days), 031.335.3565 (evenings), and by fax 031.333.3354.

There will be a weighty new tome coming to your bookshops in April. No less an authority than Professor David Watkins, currently, Head of Department at the Royal College of Art, and possibly better known as one of the most significant contemporary jewellery artists of the last 30 years, has written – and judging by the price, lavishly illustrated – The Best in Contemporary Jewellery. The book is published in England by Batsford and will be released in April, the price £35, about $75. As with all of these subjective collections it will be interesting to see who is included and even more interesting to see who is not.

For the next two items which I wish to write about, you will again need to refer to the last installment of European Notebook – I swear that I’m not getting a kickback for these referrals!! The phenomenon that goes under the name of The New Designers has just changed its format and emphasis. This exhibition, held in London at the Business Design Centre, shows the work of newly graduated art and design school students from across the U.K. each July. Over 50 courses show a select amount of work from their over 1000 graduates – including, obviously, all the jewellery and metal programmes. It is a must-see survey of each year’s student work. The tried and tested format was a four day exhibition of all colleges and universities and all disciplines at one time. Due to overwhelming demand from the institutions and the great popularity of this once a year bazaar it has just been announced that New Designers 1994 will be organized thus:

Show One – Commercial and Industrial Design. The show will preview on Wednesday, 6 July and run until Sunday, 10 July. It will include contract lighting, commercial furniture, graphics, contract flooring, architectural glass and metalwork, ceramics for manufacture, animation, product, interior and architectural design, transport design and design management. 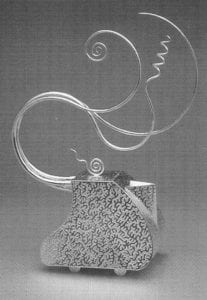 So, if you should be in London in July, you would be well recommended to visit this massive survey exhibition and take in the work of all the English, Scottish, Welsh and Irish art and design graduates of 1994. (Do I sense some staff development travel grants being considered??)

Secondly, a note about my previous comments on the Crafts Council Gallery. As if to undermine my observations about the less-than stimulating exhibitions of late they offer two strong back to back exhibitions: Twentieth Century Silver and more importantly, to my eyes, The Chemistry Set. This was a pretty good survey of the best of current British metal workers – 24 in all. The fact that 17 of them are graduates of the Royal College of Art speaks volumes about that institution’s work (and stature) – not to mention the huge influence that Michael Rowe, as Senior Lecture at that institution, has had. A show with a theme such as patination would not have been conceivable without his shadow looming over all the artists, not to mention his impressive work of scholarship written with Richard Hughes, The Colouring, Bronzing and Patination of Metals, oft copied but never bettered or even rivaled. It was good then to see the not-so-old master displaying some authoritative new pieces. Mention should be made of Clara Vichi’s distinctive and developing pieces and my own favorite artist for originality and eccentricity, Hazel Jones.

Now, while you have missed The Chemistry Set at the Crafts Council, it will be on tour and can be seen in Leicester from 2 October until 13 November at the City Gallery, contact Maria Brewster at 0533.540.595.

I sense that my allotted space is contracting rapidly, so my final entry concerns a professional organization here that I wish to draw Metalsmith readers attention to: NASJDE. This abbreviation stands for the rather long-winded National Association of Silversmiths and Jewellers in Design Education. It represents the interests – academic and professional – of its membership which is culled from the numerous colleges and universities across the United Kingdom. There have been in the past tangential contacts with SNAG – certainly many members of both organisations are acquainted with each other informally or otherwise – but the sometime mooted idea of holding a SNAG conference in London in conjunction with NASJDE or possibly an exchange exhibition has never progressed beyond the concept stage. Personally, I feel that such an event – while nightmarish in organizational terms – would have tremendous impact, influence, and momentum not to mention many obvious spin-off benefits for individuals such as academic exchanges and related professional intercourse. 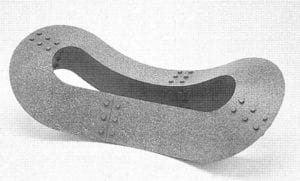 There is an annual conference of the organization with notable speakers and topical seminars – SNAG members have certainly been welcomed previously and spoken about their organization. Again I reiterate, the much-heralded ‘special relationship’ that is perceived to exist between North America and the U.K. could find some form of cultural expression with further interaction between the two organisations. Any takers?

It leaves me only to wish all and sundry a Healthy and Prosperous New Year and to leave you with a resonant quotation from Erik Satie, “Although our information is incorrect, we do not vouchsafe for it.”

James Evans is currently the Head of Metals at the University of Brighton. He has written for Metalsmith, Art Aurea, American Craft, and Kunsthandvekere.