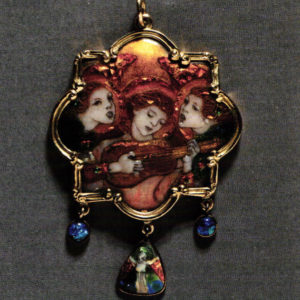 Enamels in the Delaware Art Museum

Unbeknownst to most enamelists, there is a treasure of turn of the century enamels at the Delaware Art Museum. I recently had a chance to study several of the pieces and wanted to share three of them with my fellow enamelists. These three pieces share many similarities as one was made by the teacher Alexander Fisher, the second by Phoebe Traquair who was a student of his student, Lady Carmichael, and the third by his student Ernestine Mills. While different in materials, size and subject matter, each shows Fisher’s influence. 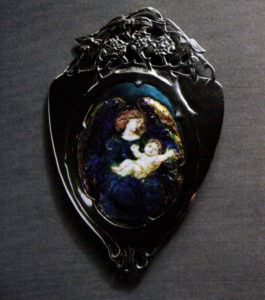 The Alexander Fisher piece “Guardian Angel” is stunning. It is a chased and pierced silver shield (11.2 by 7.4 cm) with a large enamel on copper plaque depicting a kneeling woman holding a child. Most of the plaque is done in transparent enamels with bits of foil, but the angel’s and child’s bodies are rendered in opalescent enamels. The opal enamel is built up in layers, in the moriage technique, to give a three dimensional roundness to the figures.

Most of the colors were laid side-by-side and fired, not blended or shaded. The divisions of color are not sharp, but they are clear. The exception to this is the shading used within the figures. It was rendered by using very finely ground green, yellow, pink and purple enamels. When viewed from a distance, they blend into contours and shadows. Fisher painted thin gold lines to accentuate the figures, rather than using cloisons. The angel’s hair was done in a bright coppery brown instead of the usual gold.

The next is a piece by the Scottish artist Phoebe Anna Traquair, “The Song”; a stunning piece of painted enamel on copper, with foil. It is composed of a large plaque with three smaller ones dangling below. It is primarily rendered in reds, greens and blues.

The central plaque has three pre-Raphaelite figures. The women’s faces are rendered with a pale, pink opalescent enamel. The faces and hands were developed in relief by applying many layers of the opal enamel and building it up higher than the rest of the plaque. The facial features and fingers are delineated with dark gray painted lines, which are much more delicate than a true black would have been. Delicate, painted lines of gold are also used to show form.

The rest of the plaque is rendered in transparents over copper (visible in the top of the piece) with bits of foil used for emphasis and highlighting. Foil was also used for their halos, much as gold leaf is used on some devotional paintings. The women’s ornamentation is backed with foil as well as being built up on the surface of the piece to give it a more “jewel-like” appearance. This is echoed by the two enamel “jewels” that dangle on either side of the pendant. They are small, blue, enamel cabochons backed in foil. 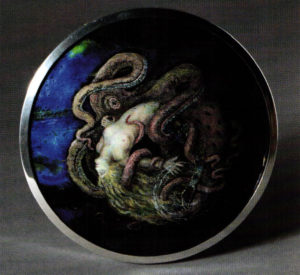 Finally, the dangling teardrop has a miniature angel rendered in raised opalescent enamel on a blue and green background with red foil-backed wings. The foil floats within this plaque giving the tiny piece depth. One can discern the difference between the copper base, the wings floating over it, and the opal figure over that.

The third piece was by Mills and was entitled: The Octopus (Death of a Mermaid). This is a very large, expertly done, plaque. This piece is a bit different from the other two as it makes greater use of translucent enamels.

The ocean appears to be done entirely on a white ground, the copper is not visible through it. The small sea creatures are backed with foil, which draws them out from the dark background.

The mermaid and octopus seem to be entirely backed by foil although this is only visible when viewed at an angle. While rendered in translucent enamels the many layers block it out. The exception is the mermaid’s tail, which was done in transparents.

As in the other two pieces, thin lines of painted gold were used to accentuate the figures. It was also used on the sea creatures and the water. A translucent white was used to create the swirling foam in front of the octopus. 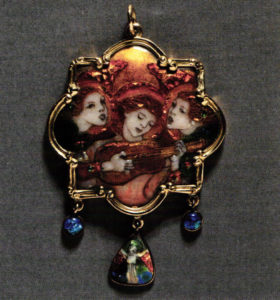 There are two techniques that make these three pieces very different from many contemporary works. The first is that they were not ground so that the final surfaces are smooth. This was used to the artists’ advantage. The building of layers lends a sculptural quality to the works.

The second is the use of foil in small, discreet places. It was not used as a main component, but as a tailored effect. The small flashes draw in the viewer without being overpowering.

With the rippled surfaces, bits of foil, and bright colors these three enamels cannot fail to catch one’s eye. If you have a chance, be sure to give them a look in the future.

Many thanks to the Delaware Art Museum in Wilmington, DE., especially Dr. Margaretta Frederick.

Ganoksin is sponsored by
By Margaret Langdell [Volume 23, Number 1, February, 2004]
In association with