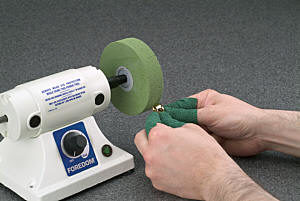 AJM Magazine has announced the winners of the second annual AJM Innovation Awards. These awards recognize technologies, like Ti-Research, 3M, etc., that are making a difference in the jewelry manufacturing industry today, and will continue to do so in the future.

“Voice of the Customer” is a driving force at 3M. The worldwide technology company cites listening to the needs of its broad customer base as a key factor in the development of innovative technologies. In the case of jewelry manufacturing, 3M customers asked for a better, faster, cleaner polishing tool, and 3M delivered with the new FX wheels.

“3M FX Polishing Wheels were developed to reduce the need for compounds on traditional buffs, yet still apply the finishes required by the customer,” says Rich Bohr, account executive with the 3M Creative Arts Markets, which service the jewelry industry. “Buffs and compounds traditionally provide jewelers with beautiful finishes, but they also generate problems such as loss of detail, precious metal removal, heat, and compound and buff residue. 3M FX Polishing Wheels were developed to reduce these problems and possibly improve the jeweler’s process time.”

Approximately one inch wide, green, and spongy, 3M FX Polishing Wheels come in various grits and diameters. Because they are soft, FX wheels conform to the shape of the object being buffed.

“It appears that the wheel’s ability to contour to the jewelry piece made the operation go much faster than with a traditional polishing buff,” says James Cantrell, CMBJ, of Coffeyville , Kansas . “With my best efforts, I achieved a finish slightly better than a traditional Tripoli finish.”

AJM Innovation Awards judge James Binnion of James Binnion Metal Arts in Bellingham , Washington , had similar results. “The finish I achieved was a little better than a Tripoli polish,” he says. “I think these wheels, like the Radial Bristle Discs, are another home run for 3M.”

One of the problems bench jewelers face is that most casting equipment is designed for larger manufacturers and thus requires a greater investment of money and workspace to operate effectively. But German manufacturer Ti-Research is changing this scenario.

The company, which is based in Mainbernheim, Bavaria, Germany, was selected as a 2005 AJMInnovation Award winner on the strength of two products: the Cast/T centrifugal casting machine and NoWax, a light-curing resin casting compound designed for the easy creation of irregularly shaped objects.

The Cast/T is a compact centrifugal casting machine suitable for gold, silver, palladium, platinum, and stainless steel. Measuring just 265 mm high by 170 mm in diameter, the Cast/T has a capacity of 250 grams of gold per run.

“This is a great component for small businesses at a very low price, but with exceptional results,” says Jörg Fischer-Bühner of FEM in Schwäbisch, Gmund , Germany , an AJM Innovation Awards judge. “It offers very good form filling due to its high centrifugal speed.”

“This is the safest casting machine I have ever seen,” adds Charles Lewton-Brain of Calgary , Alberta , Canada , another AJM Innovation Awards judge. “Unlike most other casting machines in this price range, the Cast/T protects the metal from oxygen at all times until the moment of casting. It also permits casting in shops that did not have the space or capabilities previously.”

Ti-Research has also made a splash with NoWax, a compound that can be modeled by hand to make jewelry patterns for lost-wax casting. Suitable for use with most light-curing devices, the NoWax compound does not soften during modeling. No special cooling or other treatments are required to maintain its consistency.

“For flip and rotary milling, I could set up only one or two jobs a day, max,” he says. “It was very limiting and frustrating.”

The JWX-10 Model Maker by Roland ASD in Lake Forest , California , changed that.

Since Klutts purchased the machine earlier this year, he has enjoyed a dramatic increase in his milling productivity. “I can now do four jobs in a day, easily,” he says. “I can do things faster and easier with the JWX-10 — and I can make anything: double flips, pendants, initial rings, bracelets, charms, you name it. It’s been like going from a bike to a Lamborghini.”

This kind of versatility and ease of use helped earn the JWX-10 a 2005 AJM Innovation Award.

Powered by a 20,000 rpm spindle, the JWX-10 mills wax models with detailed resolution up to 0.002 mm/step. Intro-duced in January 2005, this precision four-axis desktop milling machine is compatible with most CAD software files and comes equipped with CAM software, tools, wax, and user manuals. Designed specifically for the jewelry industry, the system offers a maximum work area of 14 cm wide by 10.5 cm deep and meets ISO standards for design and manufacturing quality.

“The JWX-10 is targeted primarily to the custom retailer,” says David Olson, marketing manager for Roland ASD. “It comes with straightforward manuals, tools, wax, and comprehensive tutorials that allow jewelers to begin milling jewelry within a few hours of opening the box.”

If you’ve ever tried to cast palladium white gold, you know that most investments on the market just can’t stand the heat. The high temperatures required to cast the white metal lead to investment failure and subsequent porosity in your castings. It’s a tough battle — unless you have the right weapon.

Enter Ultra-Vest MAXX Investment, developed by Ransom & Randolph in Maumee , Ohio . Suitable for casting palladium white gold, Ultra-Vest MAXX is designed to reduce the formation of gas porosity, eliminate flashing and spalling defects, and provide a smoother casting surface. Featuring a total working time of 11 to 11.5 minutes (gloss off will occur in less than 20 minutes), the investment is available in quantities of 50 lbs. or 100 lbs.

According to Marti Hunyor, marketing manager for Ransom & Randolph, Ultra-Vest MAXX was developed in response to numerous reports from casting customers about the “nightmarish” problems they were having when trying to cast 14k palladium white gold.

“With most gypsum-based investments, you can have a reaction that causes the investment material to break down when the metal cools, giving you an orange peel surface,” she explained. “With Ultra-Vest MAXX, you won’t get a mold reaction, and it gives you a very smooth surface finish — which is exactly what you want in a finished casting.”

In addition to taming casters’ white gold woes, Ultra-Vest MAXX is also suitable for use in the direct casting of rapid prototype models. “This investment provides an advantage in burning out resin models at higher temperatures,” said Mark Grimwade of Middlesex, England, an AJM Innovation Awards judge. “Ultra-Vest MAXX has improved thermal stability for a gypsum-bonded investment, leading to better surface finish and less risk of micro-gas porosity.”

With escalating pressure from global competition, jewelry manufacturers and retailers are seeking ways to reduce manufacturing costs without compromising the quality of their products. One way is to take the newest four-prong approach offered by Hoover & Strong in Richmond, Virginia: The company’s Tru-Seat settings for princess cut diamonds promise to dramatically speed up the setting of a relatively fragile stone shape while also reducing setting errors and costs.

“How do we compete in the global jewelry industry when skilled jewelers in the U.S. are earning $35,000 to $40,000 per year while some jewelers overseas are earning as little as $2,500 per year?” asks Torry Hoover, president of Hoover & Strong. “By simplifying the setting process so that a jeweler with basic skills can set stones quickly and accurately, Tru-Seat settings enable manufacturers and retailers large and small to cut labor costs instantly. The princess settings offer 80 percent labor savings because the difficult work — cutting the seats, cutting pockets to ensure the corners of the stone don’t chip, etc. — is done.”

The secret to the Tru-Seat design is that the seat for the diamond is pre-cut into the setting, and the manufacturing process ensures that the seat is always proportional and level. By eliminating the need for the setter to individually prepare the settings, the design also eliminates many of the problems that can arise during setting, such as over-cutting the seat, having the bur wrap around the prong and cutting the side, or drilling through a prong.

The setting process is not only faster, but also leads to fewer rejections for unevenly set stones. “The pre-cut eliminates problems with the stone not being even, or not set square,” says Lee Nohe of Dialuck in New York City, whose company recently switched to the Tru-Seat for its princess cut stones. “Because I work with major [retailers] and their QC departments, there can be problems if you have a stone set improperly. This puts us one step closer to eliminating quality-control rejection.”

Italian equipment manufacturer Next Factory had one main goal in mind while engineering the DigitalWax 010 rapid prototyping system: to bring stereolithography to every jewelry designers’ desktop. A lofty goal, perhaps, but the keys to achieving it are in keeping quality high and costs down — and Next Factory appears to be on the right track in those two areas.

DigitalWax 010 is a rapid prototyping system that uses a stereolithography process to build 3-D models with a layer thickness of 0.01 mm. Offering a laser scanning speed of 8 to 30 mm/second, the system employs a proprietary photosensitive resin that is hardened by a special laser light. Featuring a work area of 200 mm by 200 mm by 60 mm in the X, Y, and Z axes (8 inches by 8 inches by 2.4 inches), the system uses layer-by-layer forming technology to create jewelry models with undercuts, cavities, thin surfaces, and other complex geometric shapes.

Designed to eliminate resin waste, the system can be run automatically 24 hours a day, seven days a week. Able to input STL and SLC files, it is currently being sold in Europe for 25,000 Euros.

According to AJM Innovation Awards judges, the system’s relatively low price is one of its most important benefits. “DigitalWax meets the market need for a relatively inexpensive machine with quality performance,” says Dr. Christopher Corti of London, an AJM Innovation Awards judge. “Offering good quality and accuracy at a low price, it opens up the rapid prototyping market by making the technology more affordable for many jewelry producers.”