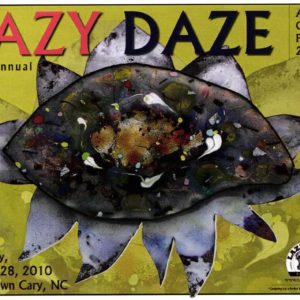 Nested in the heart of downtown Cary, North Carolina, The Lazy Daze Arts & Crafts Festival is a tradition steeped in culture and history. Each year, in the lazy days of summer, the third Saturday in August, this juried fine arts and crafts festival attracts crowds of over 60,000.

With nearly 400 artisans from 19 states featured, this showcase allows visitors the opportunity to view and purchase works from the talented artists who created them. The money raised by the Festival is used for grants to support arts and culture in the community. 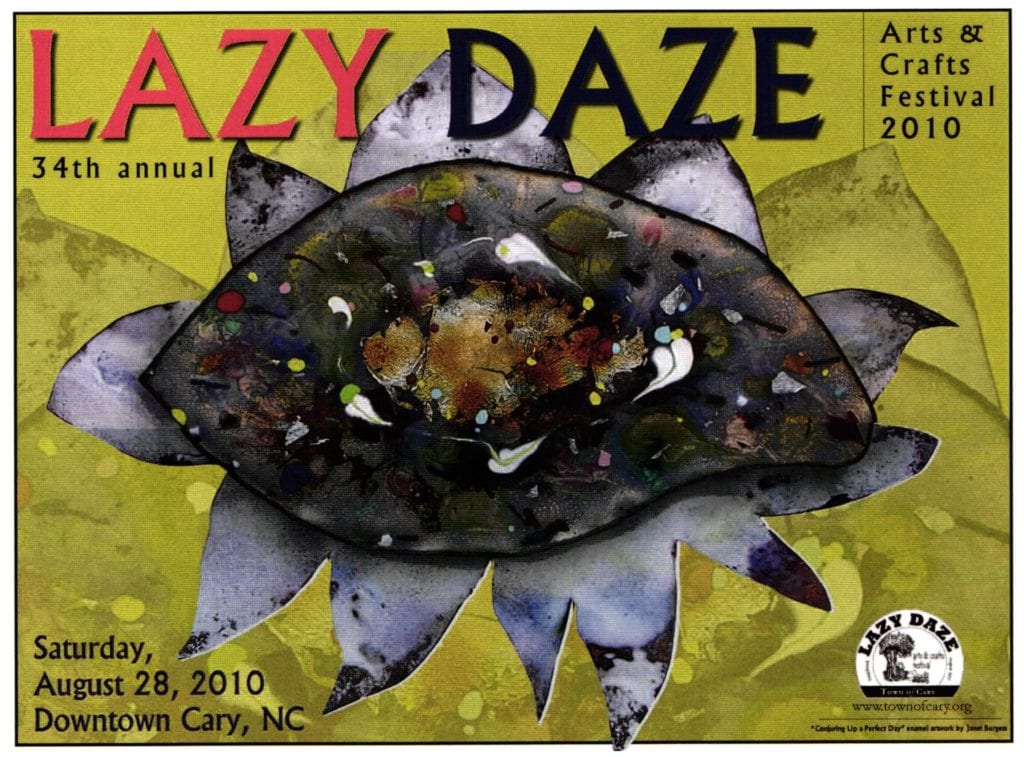 In March 2009, I sent application material to a registry of artists for consideration to produce artwork for the annual Lazy Daze Arts & Crafts Festival. The registry was open to all professional artists, without geographic restrictions, and would be used for hiring services of an artist for the Commemorative Lazy Daze Poster each year. The selected artist would work in conjunction with the Festival Committee to develop a work of art that would become the signature art piece for the Festival. The image of the artwork would then be used on all printed promotional material as well as on the website. 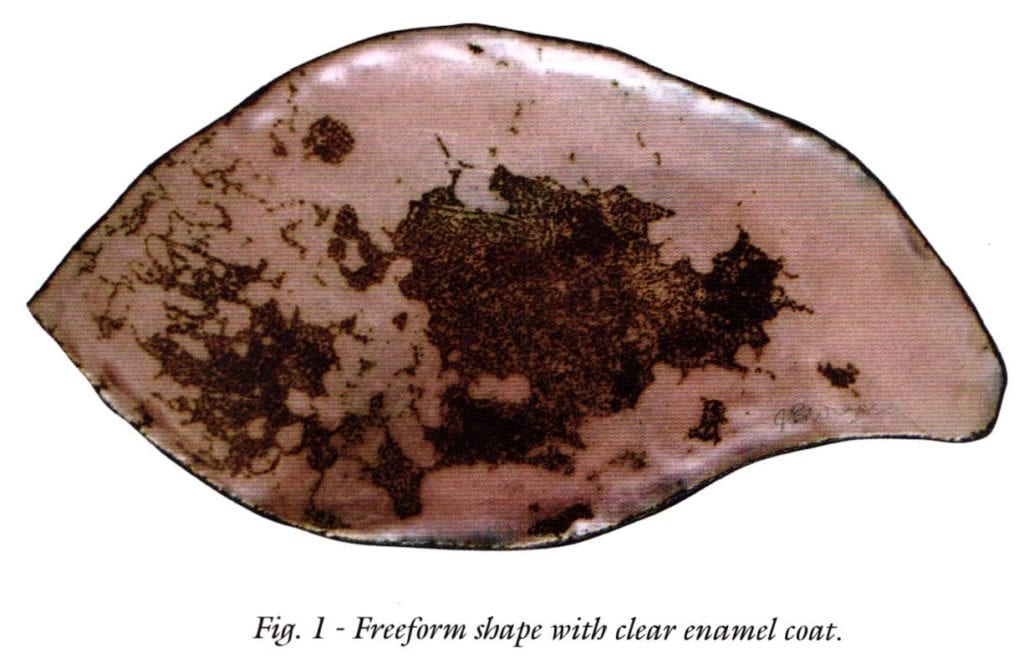 It was my good fortune to be selected at the Featured Artists for the 34th Annual Lazy Daze Arts & Crafts Festival. This is the first time the Festival has used a three-dimensional piece of art as its representative work. 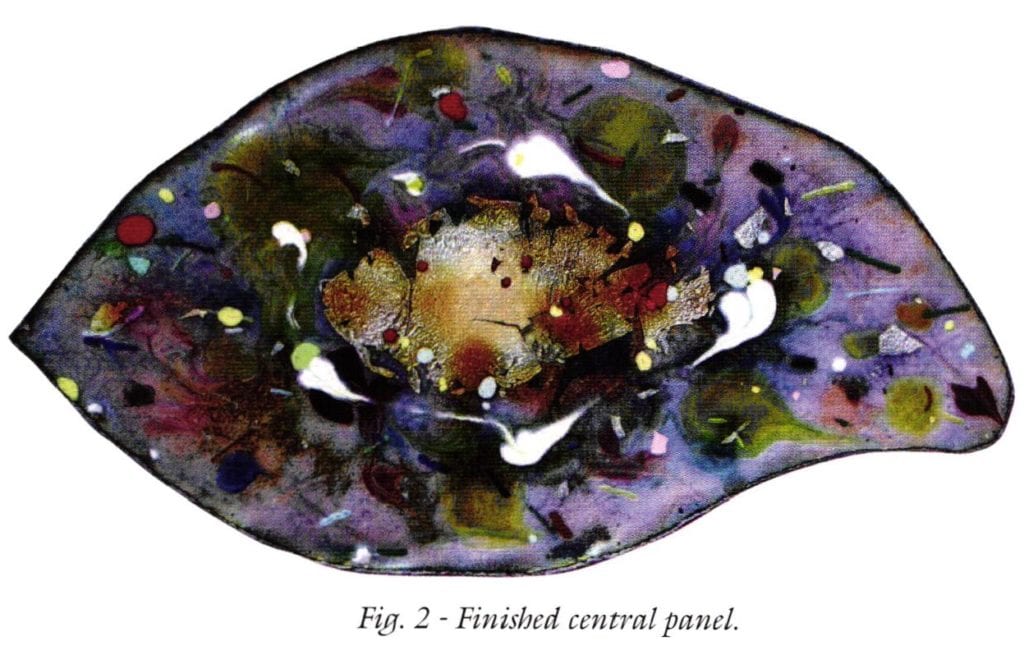 I received the notice of selection in late May 2009. I was asked togo to the 2009 Festival in order to get ideas for the piece I would produce. As it turned out, this was most important since I had no idea of the scale on which the Festival operates. That day in August turned out to be one of the hottest on record and the air was so thick with humidity that all participants and visitors were wet even before the huge storm came through! A happy feeling permeated the atmosphere despite the weather.

As I made my way through the streets to the Cary Town Hall in order to meet the Festival Coordinator, Joy Ennis, I marveled at the high quality of work displayed and the large number in attendance. I talked to the 2009 Featured Artist, who is a painter, and sought out other enamelists in the booths. I found one person working exclusively in enamel and a couple of others using enamel as an adjunct to their metal work. Seeing so little enameling represented, it was a great responsibility I felt, being in this position to represent the enameling world in such a public way. 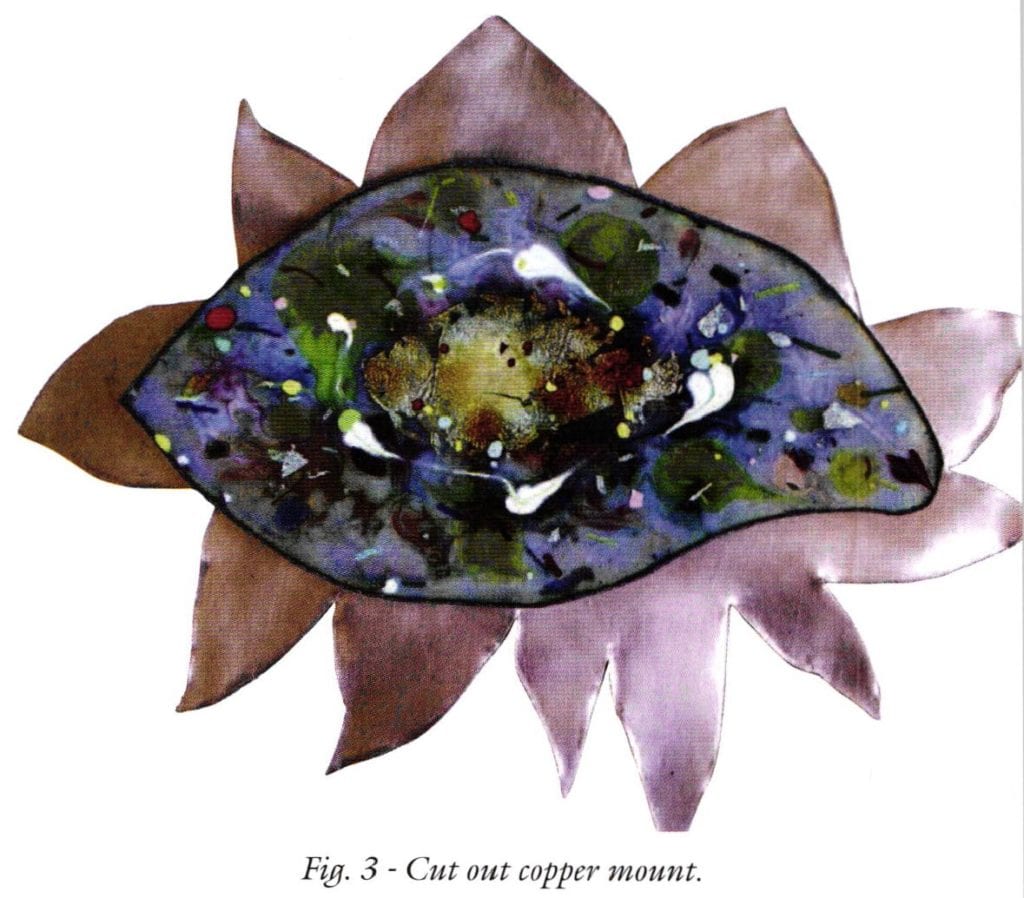 I came away from the Festival that day with a head full of images and no real ideas. For the rest of the summer and into fall I was thinking about what to do, what to propose to the committee, how to portray the spirit of the place and the day. I looked at their website to see what had been done in the past. Everything previously had been 2-D and realistic.

A few ideas started to form based on this research. I did some sketches and samples. I sent them out to the Festival Committee for comment.

The Festival Committee didn’t see what they were hoping for so I came up with another idea, made a mock-up and sent the image. Again, the Committee was not impressed. This time, I received a phone call and was able to talk to them about what they had originally liked about my images and what it was that they were trying to get. 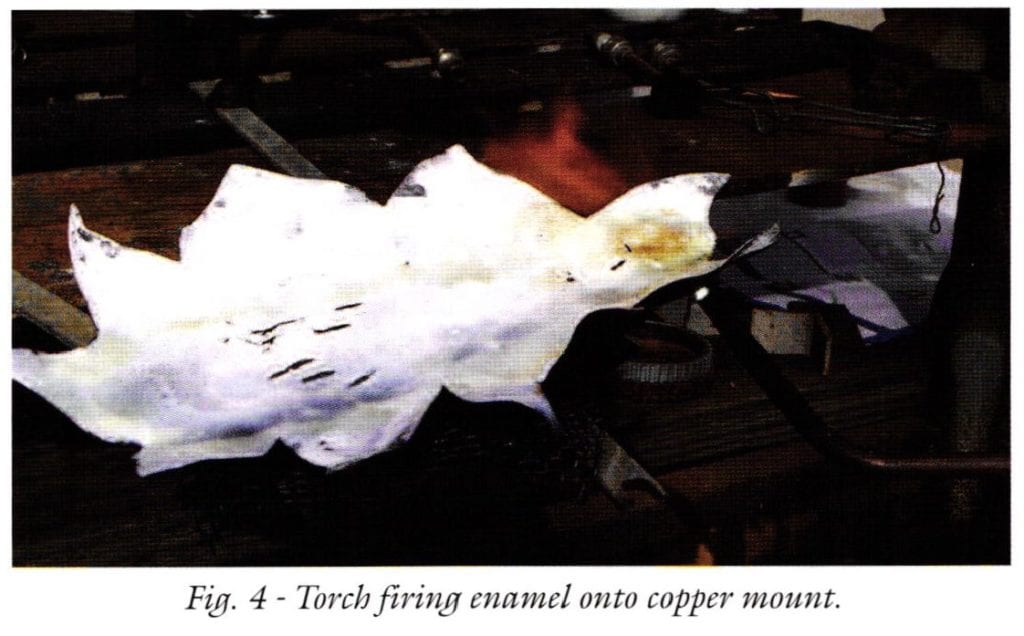 As it turns out, I was trying to give them what they had before and they were trying to get something different out of me! When I realized this I was extremely happy, because what they wanted was what I do best! They didn’t care about having realism but rather, wanted the spirit of the place and high quality craftsmanship. So, I started again. This time I was having fun instead of finding the project to be a chore. I did some experiments. I sent them these images with explanation of what I had in mind. I told them that I wanted to make a piece that gives one the happy feelings of blue sky and sunshine. I wanted it to be bright and clear. This time I received their enthusiastic approval and started to work on the actual piece. I wanted to make it grand. I wanted to make the piece feel as if it were actually representing a sunny summer day, full of promise.

I chose 14 gauge copper in an organic oval shape. My kiln is small so it took effort to get it to fit inside during the firing process. I kept the enamel transparent, representing all the colors of nature on the surface, keeping in mind a bright, sunny day. I added fine silver foil paillons for more brilliancy. The last step was to put the opaque swirls on the surface.

I loved it, but how to display? For several days I experimented with ideas for hanging. The traditional ways of mounting in a frame, on wood or on fabric took the eye away from the beauty of the piece. Because the piece is an irregular shape it didn’t seem right to put it on a static format. Hanging it “as is” with no mount didn’t show its grand qualities. I decided to cut a form out of thin copper to accentuate and enhance the shape of the piece. This form would act as frame. Originally, I was going to leave the bare copper but I found drat the copper color distracted from the central image. I had no choice but to enamel the mount as well. 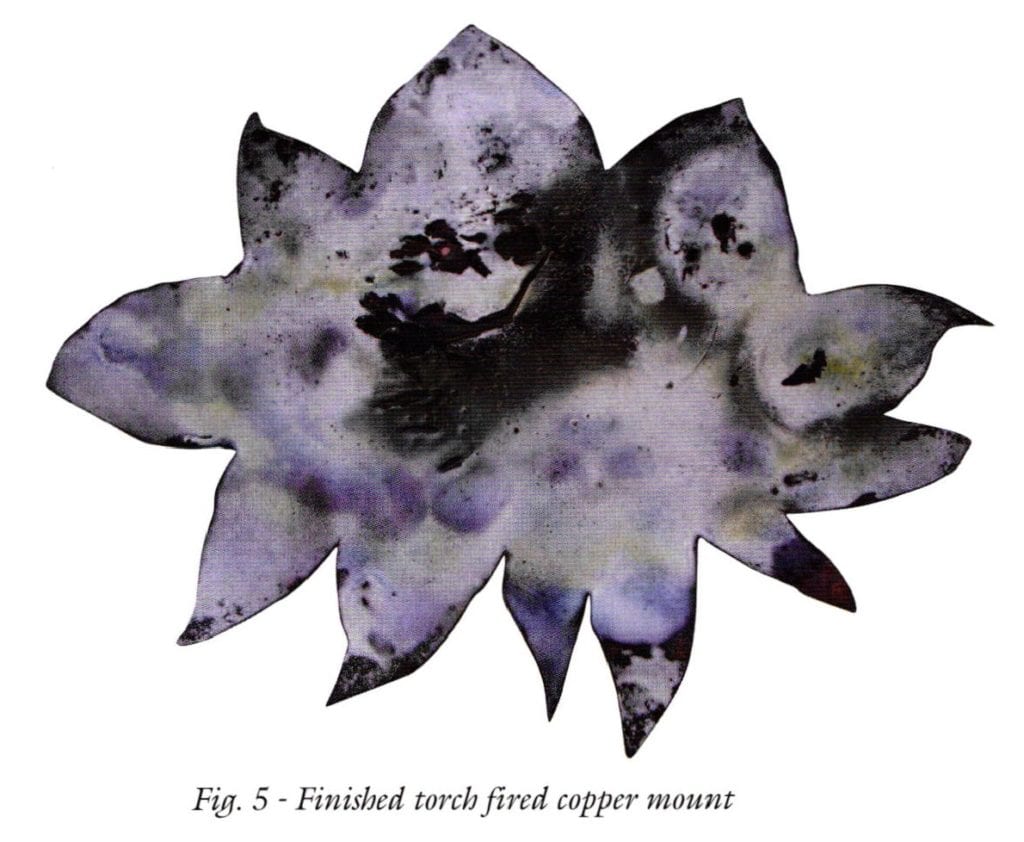 Now, the real challenge. I had stretched the very limits of my equipment by doing such a large piece. I would have to torch-fire the mount, since it was even larger. I had done a small amount of torch-firing when I was working with my teacher and friend Jeanne Garrison in Florida, so I thought I could pull this off. I don’t own a torch but finding one was not too big a problem. A friend’s husband who used a torch in his plumbing shop agreed to work with me. Since I was working on a deadline, I needed to push forward. It was unusually cold the day we chose to do the firing. I didn’t know until I arrived that we would be working outside. I didn’t know enough to let that worry me .

We started work after getting everything set up. I talked about how watching the enamel melting was like magic. But the enamel wasn’t melting. It would start to fuse and then stop when the torch was moved. The metal was so thin that I couldn’t hold the torch in one spot too long. Finally I said to my friend that this was taking forever. His comment was that the environment was working against us. The thin copper combined with the cold temperature wasn’t allowing the copper to build up heat. In the end we had to use the oxy-acetylene underneath and a Mapp gas torch on top. We followed each other around with the flame, melting one spot at a time. I do not recommend torch-firing in below freezing temperature. What should have taken I5 minutes ended up taking one and a half hours. 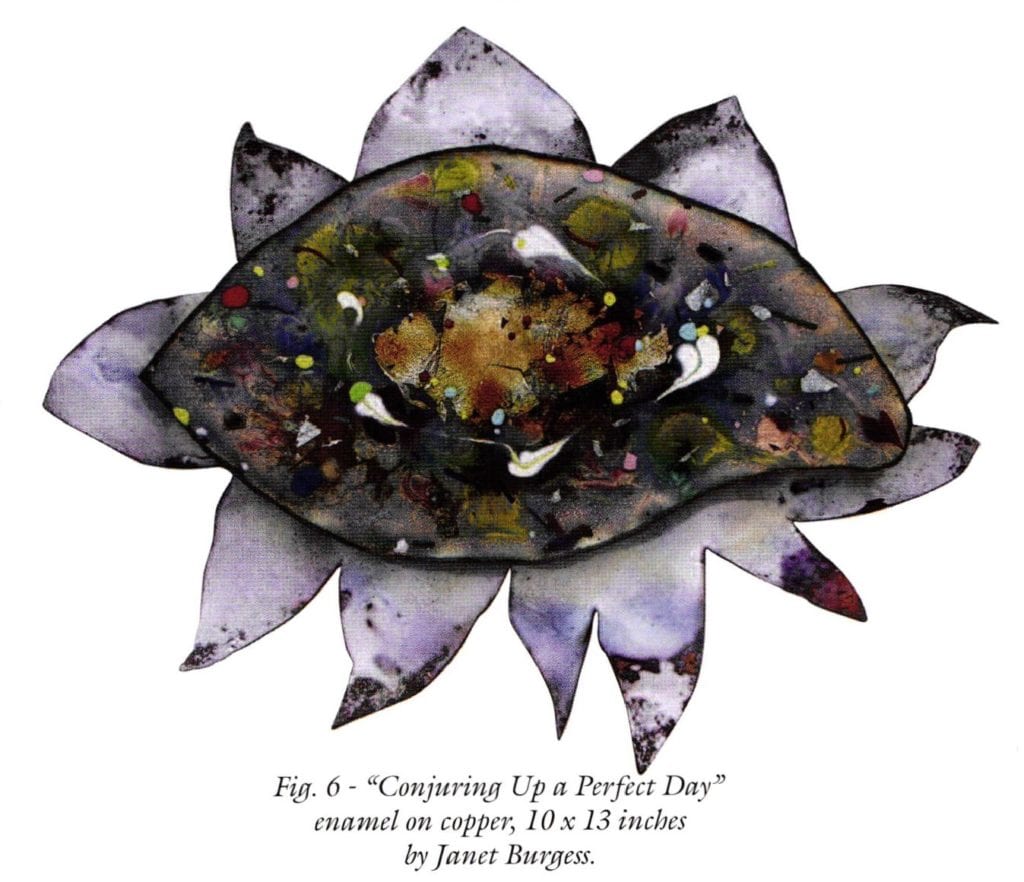 Although I would have preferred the mount to be “perfect,” most of it would not be seen, so I made sure the points were to my liking and accepted the rest of what I got. I was grateful for the help from my friends, without whom I could not have finished my project.

Back in the studio I attached the enamel to the mount. The tide came to mind at the same time. In keeping with the feel of the show I would call it “Conjuring Up a Perfect Day.” Finished size is 10 x 13 inches. I photographed the piece and sent the images to the Festival Committee for approval. To my delight, it was what they had hoped to receive from me – an abstract piece that spoke to the day.

On January 28, 2010, “Conjuring Up a Perfect Day” was presented to the public at the Awards Ceremony. As I write this, the poster and promotional materials are being prepared, using my enamel on copper as the central image.